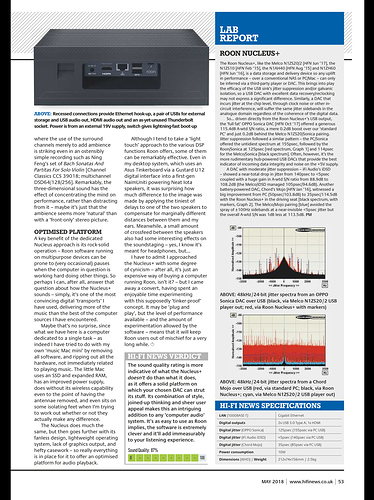 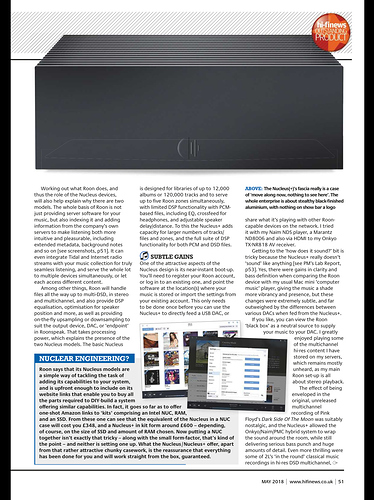 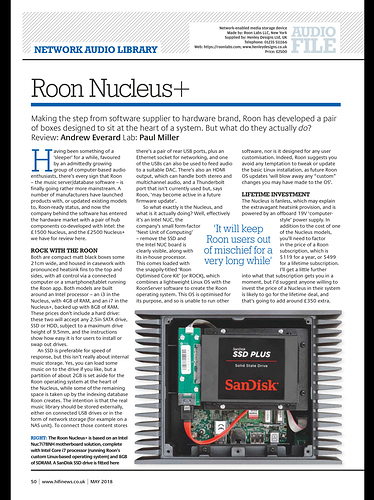 ‘Sound quality rating is more indicative of what it doesn’t do …than what it does’…? Er, OK, love to know how they got to 87% or what one needs to do to get 100%. I gave up that hifi comic some time in the 90s.

The reviewer is also apparently confused between the M2 SSD used for ROCK and Roon, and the optional SSD/HDD, which is intended only for music storage:

“Yes, you can load some music on to the drive if you like, but a partition of about 2GB is set aside for the Roon operating system at the heart of the Nucleus, while some of the remaining space is taken up by the indexing database Roon creates”.

Er, nope, you really shouldn’t do this. Use an optional separate 2.5" SSD/HDD for your music. Sigh.

Do Roon not send out a press release to assist these ‘reviewers’ with their reviews? At least they could then just parrot the Roon supplied facts and get those correct. The rest of the review is the usual spurious subjective and usually inaccurate/technically incompetent opinionated nonsense, which we can all ignore as usual.

Very pricey. I’ll stick with my i5 NUC in a fanless Akasa Plato case for the princely sum of £500. Not sure what additional functionality warrants the extra £1,000. I guess this suits the non-geek (aka. mainstream) market.

Well, if your going to retail a product, a dealer has to make a profit. It is for people who want plug and play.

Not sure what it means when reviewer states that nucleus was “co-developed with Intel”.
Bought groceries today. Guess I “co-developed” a ride to the store with Chevy.

Just more ‘audiophile’ reviewing BS. What is it with these guys?

Wow. People really seem to be itching for a fight with HiFi News.

I may be wrong, but I do think somewhere in this forum Roon reps mentioned working closesly with Intel to really get the Nucleus hardware optimized for Roon and music playback.

Exactly. Not only does the dealer/distributor need to make a cut but the plug & play is a huge piece of the pie. A lot of the people on this forum are not the intended audience of the product. I’ve built every PC ive used over the last 20 years, and while i don’t currently use ROCK im really happy to see that Roon wisely provided the option for those who are so inclined. That is just pure goodwill with your customers. The Nucleus is a choice of convenience and one that makes a great option for some people, while ROCK is great for the rest of us.

Yes but what are these ‘optimisations’ Roon have done with Intel and do they really make a difference over a stock i3 or i7 board? I guess I’ve moved on a lot in recent times: I used to upsample everything to DSD256 and I don’t bother any more so, apart from that requiring an i7, I’m not sure what else peeps are getting. Don’t get me wrong I love the idea of the Nucleus but I’m still scratching my head at the value for money here. It doesn’t even come with storage and the Roon licence is additional too. What I’m saying is that I’d struggle to recommend it to my less techie friends.

Value for money is very much de[endant on ones personal circumstances. Some people are cash rich and time poor. For them this is perfect.

It’s a music appliance, just like a CD player, amplifier or loudspeakers. Some folks prefer to build their own, others to buy a branded product. Some folks are happy to put a HAT on a RPi and flash an SD with their choice of OS, others prefer to buy a microrendu or ultrarendu. Horses for courses…

A typical jitter around ~150psec is very well engineered compared to a good CD players. It is interesting that battery powered external DACs saw even lower jitter, a quite significant drop to just 35psecs! (iFi iDSD)

Some DACs take some power from the host (USB +5V) so it is not galvanic isolated; any noise generated by the host can of course propagate to the DAC and may affect the jitter performance. Luckily this can be easily solve by mounting the DAC as ‘endpoint’ or invest on a galvanic isolator such as USB Regen.

Getting off topic here but vfm and hifi do not go together. Look at the prices charged for add on external power supplies for Naim gear for example. Those are stunning vfm compared to the prices they charge for superlumina interconnects though!

Yes but what are these ‘optimisations’ Roon have done with Intel

Check out the Nucleus white paper for some answers to this.

…and do they really make a difference over a stock i3 or i7 board?

Don’t know. If someone would kindly send me a Nucleus, I can test it out and tell you though.

Pretty expensive. I imagine most people will use an Intel NUC instead. Not sure I like that those have a fan though.
I see the Sonic Transporter is $795 now which puts it right in between a NUC and this. If I were going to spend that much I’d spend a few hundred more on a Nucleus.

Not sure I like that those have a fan though.

For £80 you can get a Akasa Plato fanless case. Very good and it efficiently keeps the CPU and SSD cool.

Some folks prefer to build their own, others to buy a branded product.

Some people are cash rich and time poor

I agree and would state it stronger. There are 833 million people living in the USA and EU, I wager 832.7 million would not for a moment consider a DYI solution.