Roon pass through to Tidal

Hi new poster here. Loving Roon and all it can do. Long time JRiver user.

One thing I’ve tried to do in Roon but can’t (so may not be currently possible) is for Roon to reflect (pass through) my Favs, albums, artists etc to my Tidal account.

This is so that when I’m not accessing Tidal via Roon (say when I’m travelling) I will still have all my fav artists and albums etc available.

Of course I could, every time I fav something in Roon also to the same manually in Tidal but it would be just great if this would be a one step process.

Albums should sync each way; you may have to wait awhile for this to happen, or you can force it by tapping the little sync icon (curly arrow) on top left of tidal tab.

Thanks for responding Brian. However albums are not syncing and I don’t see a sync icon.

I’m in the Roon app (windows version) and go to Menu > TIDAL > ‘Your Favourites’. All I see there are artists and albums I specifically saved whilst in Tidal (i.e. outside Roon). Perhaps I’m in the wrong app or need to look elsewhere in the Roon app.

Here’s what I mean. (It’s from my tablet but the windows app is the same) 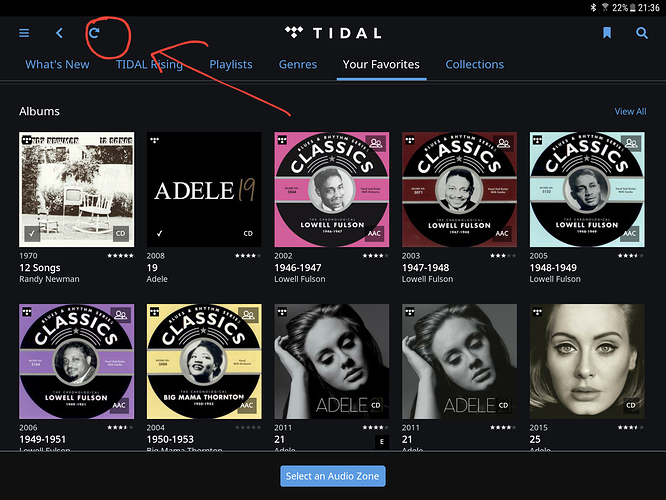 PS the library, album page is better to use once everything is sync’d

Many thanks Brian. Must have missed that. I added your Randy Newman 12 songs album and that synced across my devices.

But I seem to be having an issue trying to do the same for albums I already have. Specifically when I call up a local album and then use the Roon tool ‘Go to Tidal version’, add that Tidal version to my library and then try sync, the sync does not work. Tried it on a few albums but no joy. Wierd.

Strange. To be clear, you have added a Tidal album to your library in Roon, but it doesn’t show up as a favourite in Tidal?
And to confirm, it does show up in your Roon library? (Use library, album)
And as you already had a local version, you now see two?

This would be useful but it would also put a lot of folks very close to the 10k limit in Tidal.

neither adding a local album nor making that album a favorite feeds back into Tidal.

Indeed, but the OP said

add that Tidal version to my library and then try sync, the sync does not work

James, many thanks for stepping in as well. And thanks again Brian for your input.

To be clear I’m not looking for a way of Roon automatically (i.e. without my intervention) of reflecting the Tidal versions of albums I have stored locally in my Tidal lists. With about 6k of local albums this would become rather unwieldy and probably start hitting some limits or something.

But in any event I think a big mea culpa is deserved from my side. When I add (via Roon) a Tidal album to my Roon albums (via the add to my library feature) that Tidal album does get reflected in my Roon albums list as well as my Tidal albums (in Roon via ‘Your Favourites’) and also in Tidal under My Music/Albums.

So all works fine.

What got me is that the Albums listed under Roon/Tidal/Your Favourites only has one sort order (A-Z). So when I added ‘12 Songs’ it was seen instantly (as it is precedes A-Z) but when I added other albums it was buried deep in my Tidal albums list so I missed it.

What would be ideal is if Roon added their standard sort functions to the Albums list within the Tidal list.

So apologies for getting this wrong and wasting time.

No problem Edward. pleased it all got sorted in the end.

As I’ve intimated above, that list is not very useful. Slow to populate, not all albums often, and can’t sort. Much better to use the Roon album list which is much more powerful.