One of the features that I love of Plexamp is the ‘Mix Builder’ feature. Essentially it is the ability to create a one-time custom radio from your catalogue letting you select the artists that will be played, and offering you recommendations based on what you have selected so far. I am attaching a couple of pictures to give you an idea of the feature. It is very user friendly and lets you create a radio quickly based on your current mood. It would be great to see something like this on Roon! 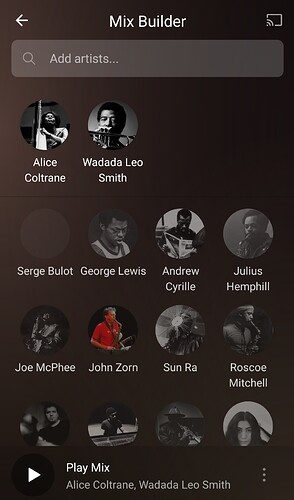 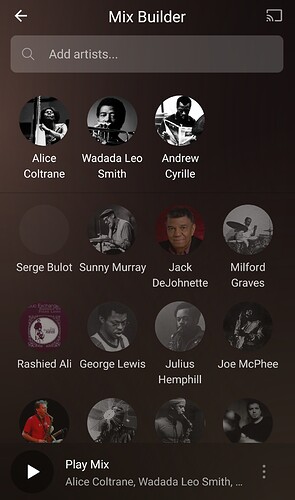 This would be great. Honestly, Plex’s radio is lightyears ahead of Roon’s, for me. I don’t sub to Qobuz or Tidal, so I rely on Roon’s built-in radio algo and it is consistently awful.

I plug in a Plex radio and it’s phenomenal. The last three years, I would say, Plex has overtaken Roon in this by a mile. It’s such a shame because I prefer Roon for almost everything but radio play, but radio play is becoming my go-to.

I loved Pandora back when it was available in the UK, so many years ago.

I use PlexAmp when away from the house, but never even realised this feature was there. Mostly I listen to whole album’s, but good to know that it is there

What do the screenshots show? I don’t get it.

The first row (Alice Coltrane, Wadada Leo Smith…) are the artists that you select to be played on the radio.The other icons are options that plexamp offers you picked from your catalogue based on these selections. You can click on one of those and they’ll be added to the radio,and then the list of alternatives changes to reflect your new selection. You can always look for and add an artist via the search bar.

That sounds like a very useful feature. Roon Radio isn’t too bad but I feel it used to be better before the Valance changes.

Just built a couple and while quite nice it doesn’t seem to bring in new artists like Roon radio or Pandora radio (their best feature).
I will try a couple of them when in the office this week and don’t have Roon to play with.

Ok scrap that, if I press the play radio button it does exactly that. Could be fun I think, so thank you for highlighting it

Agreed. This would be excellent. I find that Radio is extremely limited and would like to be able to add other artists or tracks to be able to have more customization.