The Roon App and Roon Radio are getting really frustrating recently.

I picked and imported an album from Qobuz to my library, then I go select the first song in the album hoping to listen to all songs but After the first song finishes then Roon radio gets in the way and plays sometimes a completely unrelated track.

Very frustrating. If I disable Roon Radio then it stops playing and doesn’t jump to the next song in the album.

Any idea how to fix this without creating a playlist for one album?

What Roon does is it puts your selection in the Queue, and it then plays the Queue till it’s empty, then if you have it turned on, the Radio fieature kicks in and goes out and picks something else to play and will do that forever.

So if you don’t like that then perhaps turn off the Radio.

Next famalirize yourself with the selection mechanisms and perhaps customize them to work the way you like.
Select the hamburger on the top left, then Settings, then Play Actions, then go through each item and Edit the order and the top item is the Default action, use the hamburgers to move items up and down, in my sample the Play Now Action is the default, I like Queue as my default. The Tracks actions also have a Play from Here and Queue from Here, which means start at the Track I’m pointin to and play it and everything below it. Your issue was you selected a single Track and it played that one single track, so you would have liked the from Here options better. 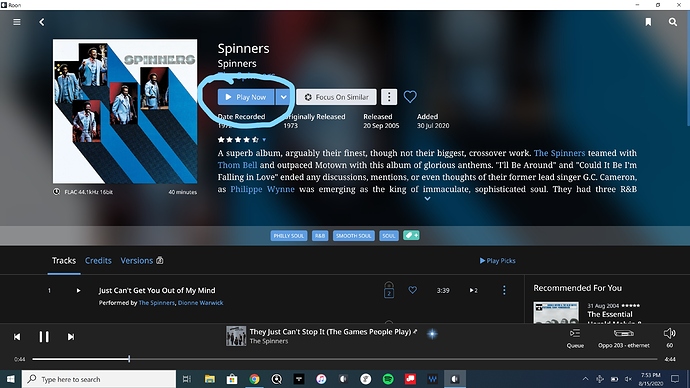 In the Album view, it shows the Album and its Tracks, clicking in the Play Now button will send the entire album to the Queue and play it. Selecting the down carrot next to it will open the menu you customized above, and let you choose one of the other options. Put the one you like on the top and it will be the default action item on the left.

Down below in the Tracks section, clicking on the play button in the squared area will send that one track to the Queue, and selecting the wide area circled will also bring up the menu of selections from above, where you can find more play options like Play from here. 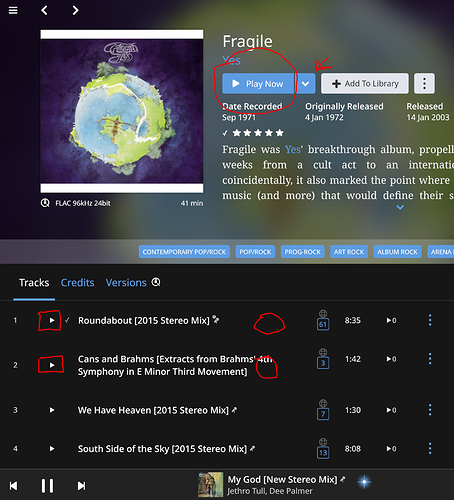 Go play with each one and customize thier actions to work the way you like, go explorer and play and enjoy.

One more thing, hit the hamburger menu item and if you choose Qobuz from there you leave leave Roon land and be in Qobuz land, remember Roon land works on your music and Qobuz land works on Qobuz music, and they are different and act slightly different.

When you hit Add to Library, it saves that item into Roon land and you can use the Albums, Tracks & Artists selections to find your Qobuz items mixed in with your music.

I like to stay in Roon land most of the time, do some searchs which takes you to both and select items to play and save things I like to my Roon music. 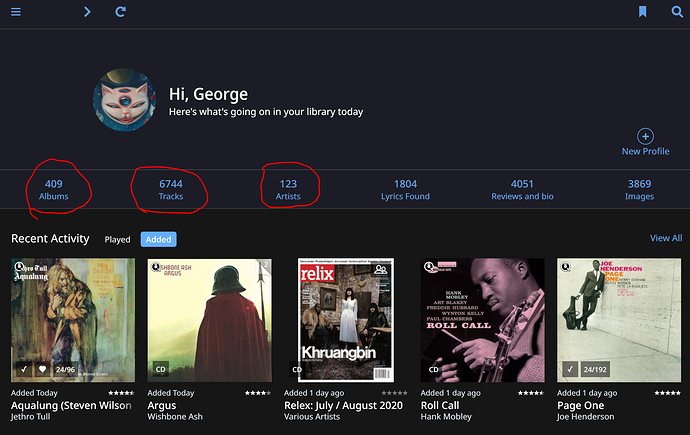 I appreciate the answers and details.

I know how to use the queue and Play from here features and I was mainly ranting in frustration but the point I was trying to make is that the iOS apps could take some usability improvements both in UI and music selection.

The Play from here doesn’t show if you point to the first song in an album. The main Play button label says “Roon Radio” instead of Play now or Play from here. IMO if I selected one track from an “Album view” the app should not assume I want to listen to something completely different after that one track e.g. if I’m listening to Classical music it shouldn’t switch to Rock or Urban music. 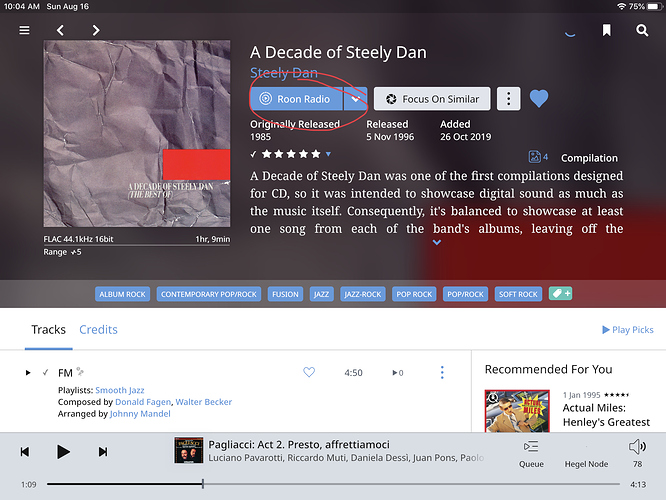 As was said above you can change the default behaviour.

It does, do you my chance have Play From Here turned off in the Album Tracks settings? 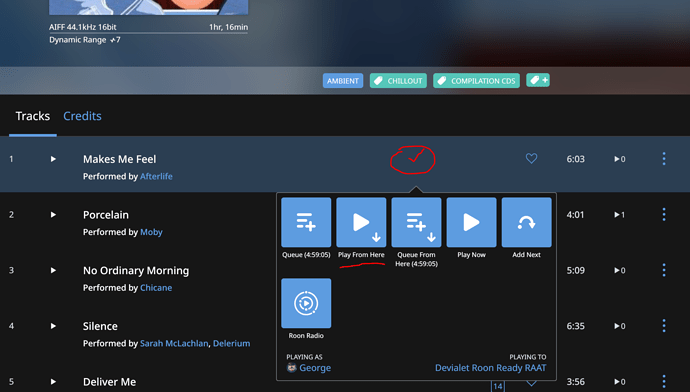 Thanks again @geoB that helps, but the Roon Radio picks still need work

This is how I had it working before but for some reason my app was defaulted to Roon Radio instead of Play Now as @geoB suggested.

Come to think about it I don’t remember having these issues until after a recent update, did they change the defaults?

Nothing changed for me.

No change to defaults.

I wont argue that, but regarding Roon Radio, I have been wondering, do you Favorite any music or songs, I’ve been wondering if the Roon Radio looks at what you favorite along with the rest of the music community.

I’m really more interested in whether or not I should be Favoriting music, I’m still only a few weeks into using Roon and I have been Favoriting things I like and do not know if that is good or bad, but so far, the selections Roon Radio is choosing for me are working pretty good.

I do favorite and I can tell it’s getting better at recommending and picking up tracks and albums I like.

Occasionally it messes up completely as I mentioned above and ends up switching genres or music styles completely. But it’s definitely getting better.

I always play full albums, never individual tracks, and never playlist. When the albums ends, if I don’t have another album queued up, Roon starts playing individual tracks that are very similiar to the album I just played. For me, it always works as it should.