Roon shows MQA instead of FLAC 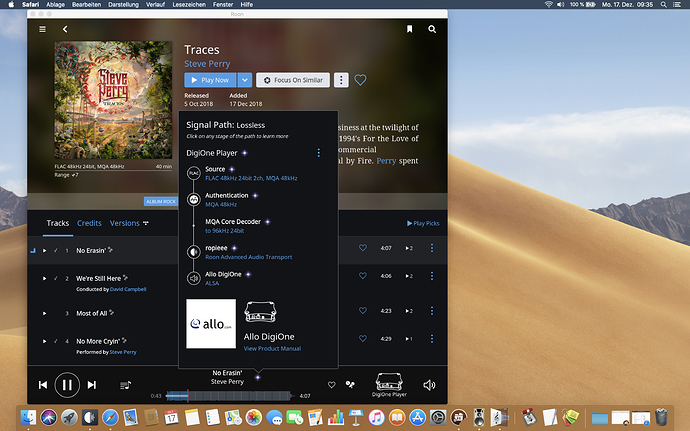 Is this really possible that the files have both?

ok, but I do not understand it, because i bought FLAC?

Is my signal path ok?

The signal path is more likely to be right than the metadata. It’s like the difference between the label on a package (metadata) and an inspection of the contents (signal path).

MQA files are typically distributed as 24/48 FLAC. It’s not at all surprising to see. The Roon MQA decoder has detected your file as MQA and is decoding it to 24/96. All as might be expected.

When the original Sample Rate (MQA 48kHz in this case) is less than 96kHz then the Roon MQA decoder is effectively upsampling to 96kHz.

The MQA Core decoder is enabled in Device Setup/Advanced Settings. You can turn it off for your Device if you want. Personally I just leave it on.

Thank you for clarification. What exact would happen if I turn off the MQA Core decoder? No music then or no bitperfect…? What would I hear, Flac i guess because my Hegel Amp/DAC do not support MQA?

You would still have bitperfect playback of the undecoded MQA FLAC file. All the bits in that file will be played unchanged.

As to whether that MQA file is bitperfect compared to a non-MQA FLAC file of the same recording, the answer is “No”. But getting MQA to say that is harder than dragging them backwards through a hedge. The bits are different because the MQA file folds up information above 48kHz under the noise floor. Therefore those bits under the noise floor will be different between the two files. MQA says it doesn’t matter if bits under the noise floor change. Others, including me, think this is being disingenuous. If the bits are different then the two files are not bitperfect. Whether it matters is the important point. but if we start allowing two files that have different bits to be called bitperfect copies of one another then where do we stop ?

When the original Sample Rate is less than 96kHz (your file was recorded at 48 kHz) then it is not at all clear to me that anything useful is folded under the noise floor. We could just be talking about noise vs dither. Nevertheless, I just leave the MQA engine on, because I can’t hear a difference in those cases.

Thank you very much for the detailed info.

What exact would happen if I turn off the MQA Core decoder?

It will sound worse. So you should leave Roon MQA Core decoding on. It especially helps with non-MQA DAC such as yours.

Streamed TIDAL albums also display as both FLAC and MQA.

I have decoding turned off in Roon, so I always make sure to stream the CD only versions.

That would be a matter of opinion!

If the album wasn’t labelled as lossy MQA when you purchased it I would try to get a refund and ask for the real 24/96 or 24/192 version.

That really is a low blow. I say, let your ears decide. MQA is not musically Lossy in any meaningful way. It is not MP3 or anything like it.
I would be delighted if I bought a FLAC file only to discover it was MQA also. The CD file will be better than CD and the MQA option will be there.

I say don’t support a bullshit format when you don’t have to. What I said is 100% fact, the source files used to create MQA are lossless. MQA isn’t.

I’m not here to complain about the sound of decoded MQA. But people should get what they pay for. Obviously this isn’t a huge deal since downloaded music wouldn’t be a collector’s item and so I assume this was not an expensive purchase.

But, as a matter of principle, swapping in an MQA file has every chance of not being what a purchaser wanted: (1) a purchaser with no way to decode MQA would be thus listening to the pre-decoded file and those files are NOT equivalent to a simple hi res 24/48 file, and (2) even if the purchaser could decode an MQA file today, there is no guaranty that MQA will make it as a format and MQA decoding could disappear, or at least not available on all the devices where the purchaser want to listen to the album. Then you are stuck with files that is not quite equivalent to a hi res 24/48 file. It’s not necessarily a bonus.

I’m not criticizing MQA here. I am saying that it’s not good business practice to sell something that many users would consider partly incompatible, somewhat less than 24/48 hi res flac, and not as advertised.

And they are authenticated so you know this. Your 96/24 file could be anything… you just don’t and can’t know.
The analog output will be that of the studio sound.

I agree you should get what you pay for and if it is an MQA file, it should be advertised as that.

The analog output will be that of the studio sound.

No it isn’t, it’s MQA’s minimum phase filter and DSPing, not what any engineer heard when mixing and mastering in the studio.