Roon stability - am I an outlier?

So here’s the thing…I don’t think I actually did anything. I apologize as I realize that doesn’t help you or anyone. From the beginning I would have "tidal loading slowly " message, I would reboot one thing or another. And when I couldn’t make it work, I would just give up and access Tidal through the Lumin App. And it would always work from the Lumin App. In the beginning, I would try for hours and now, if after one reboot of my entire system including router and modem doesn’t work, I just give up.

For the last 3 weeks or so, its been stable. From multiple reboot in one day to zero reboots in three weeks. I didn’t to anything, didn’t adjust settings on the router or take anything off my network.

I don’t know what to say, I totally understand your frustration, as I’ve kinda been in your shoes.

Sorry but it just has, only minor issues I have ever had have been caused by my own stupidity.

Relatively small library of about 70,000 tracks located on a separate 4tb USB HDD connected to the Nuc.

No problems on any of the updates at all.

Give it a chance op and as already stated you can opt for a monthly sub for now so not a huge financial commitment and gives you a little more time to see if you can iron out the kinks enough to stay around a while longer!

Relatively small library of about 70,000 tracks located on a separate 4tb USB HDD connected to the Nuc.

Its so funny to me that 70, 000 tracks in our community is small. It really makes me chuckle as my brother thinks I’m bonkers because of my 9000 tracks. …well I hope one day I can grow my Library to that number.

Personally I agree that it is large or so I thought.
But after seeing some of the library sizes mentioned here it appears to be quite normal.
There was a mention last night of someone with 970,000 tracks!!
Nearly one million tracks😲

Thats incredible. You said here in the roon universe? Could you link me that thread?

I have been a subscriber for almost 4 years now and have used a variety of zones and endpoints. I have had almost no problems and certainly no problems that were persistent or were difficult to resolve. I think that there are two main reasons for this:

Of course I use quality Endpoints as well but that seems to matter less than 1 and 2 above.

I have never had issues with the Roon Core becoming unresponsive.

I have never had issues with mobile apps disconnecting (I use iPads and iPhones).

I don’t use Chromecast or Sonos systems.

I’m not sure you need your house wired with CAT6 throughout, although I wish I had that. Still, I think internet speed is important. Before switching from 600mb/s service to gigabit service, I had music drops and other hiccups from time to time. With gigabit service, I never have any problems with wired or wireless connections, even with my older equipment: 2014 mac mini, older synology NAS, and older apple airport expresses as end points. Aside from the older apple stuff, I do have newer gigabit modem and router though. Certainly, decent ISP speed and network devices are critical.

Sorry but I have a 100Mbpw internet connection , and I have never experienced a dropout due to ´low’ internetspeed.
Modem and especially router quality can play a role though, definitely an area to investigate
Dirk

Had the same problems for almost as long as I’ve had Roon, which is about 6 months. Last weekend, I called my ISP to change the WAN settings in my modem/router to bridge mode because I needed parental controls in my mesh router (I had it in access point role). I changed the DNS to CloudFare with Google as backup. I also removed IPv6 in the router since my ISP is behind the times. And now I’m getting a really good experience with Roon. So much so that I think I’m hearing an increase in sound quality thru my various my end points. It can’t be true, right? Now this has me reading about audiophile grade ethernet switches.

So, I guess I just wanted to say that I thought I had an optimized network. I mean everything else worked, PlayStation, Netflix, AppleTV, etc. It appears it wasn’t Roon-proof. I don’t know what network change/s I applied did it for me, but it/they improved my Roon experience.

I think I am also one of the lucky ones who’s experience thus far has been mostly positive using Roon (been using Roon software since v1.6).

My experience thus far echoes that of those pointing to Roon needing a relatively or preferably highly stable network (not necessarily fast). Where I live Roon has struggled wirelessly in the past due to a couple of main factors; the first (and more important) being the walls are reinforced concrete…and so are complete signal blockers. The solution I found to this was in the placement of my Roon equipment in relation to my router. Roon used to start tracks and then drop out and also refuse to load Tidal tracks until I moved my router to a more efficient area which had better signal visibility to my Roon endpoint (needless to say using the 5Ghz wi-fi channel is a must).

The second issue I have, and to which I have no solution currently…is the completely rubbish router my ISP provided me and which I cannot change. If your ISP allows I would recommend changing your router to a good Netgear one or another make of similar quality. The router my ISP supplied has weak antennas and does not like to be told what to do…it’s cheap and it and shows. Whereas a third party router can be very customisable at the same time as having much stronger wireless signal distribution.

In short and from my point of view, moving from J River Media Center (which I still use and still think is good software) to Roon a few years ago has been mostly positive and a vast improvement. Wired networking is always preferred for stability (and not just for using Roon), but where wired connections are not an option beefing up your wireless LAN either by buying a new router (maybe with a mesh system) or by placing your equipment better in relation to your router can go leaps and bounds in making your Roon experience better in my opinion.

The second issue I have, and to which I have no solution currently…is the completely rubbish router my ISP provided me and which I cannot change. If your ISP allows I would recommend changing your router to a good Netgear one or another make of similar quality. The router my ISP supplied has weak antennas and does not like to be told what to do…it’s cheap and it and shows. Whereas a third party router can be very customisable at the same time as having much stronger wireless signal distribution.

Can you not ask your ISP to put your router in ‘modem’ mode.
I have requested that, and placed my own router after the ‘modem’.
Day and night difference, and also in complete control.

Thanks for your experience @Atom

From my side, the ISP router is in modem mode already (with my ISP you can configure this yourself via the admin UI), and my main router is a nest hub (if I had the chance again, I’d go for Ubiquiti) with a couple of mesh points around the house. The NUC on which the roon core runs is wired into a 16 port switch that in turn is wired into the router.

Speed tests etc. seem good, but I haven’t checked consistency of connection, so there could be drop outs I suppose.

A couple of years ago I tried manually first to turn my ISP router into ‘modem’ only mode…that failed as there is no option within the router settings to do this (something else that is easily accomplished with a third party router), so I called my ISP to see if they could do it themselves (maybe even remotely; given that it was 2019/20 at the time)…alas, after two or three calls to supposed support technicians I was told that the router was not able to do this (still not sure if this information is true). Also I have the problem of having had to add an IP phone system (due to working from home) from the same ISP…this was my mistake and I should have tried to avoid it, not because of the cost (which in the end I think there was actually a cost reduction overall) but because it made me more reliant on their bottom shelf router as their phones won’t work on anything else.

Thanks for the suggestion, I did try, however I think my ISP here uses a highly inflexible system which is bottlenecked by their router. I get decent/good internet speeds 14MB/Sec download here in Greece (better than I have back home in the UK) however the router I was given (and can’t change) is completely useless at managing the data across my LAN…it gets a bit frustrating sometimes but there are work arounds in most cases.

Did you try pinging your Roon Core? Something like

Until very recently I was having request timeouts, which are a sign of network problems. 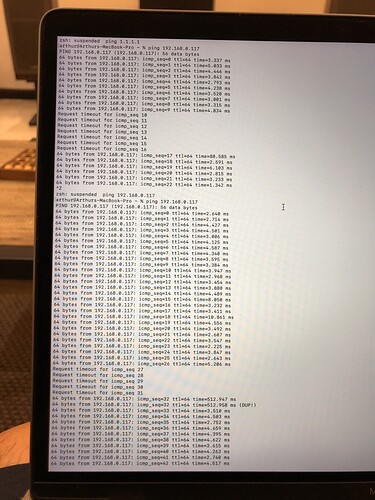 Is it the routing duties of your ISP modem/router that is the problem? Or is it the wifi signal? If it’s just the signal, you can add a mesh kit set to act as access points to your network. You have to turn off the wifi of the ISP router though to prevent congestion. But you’re right though, ISP bridge (modem) mode + a more powerful router is the way to go. I’m actually in the market for a better router since I found out my current one is not that good–I’m getting 200+ ms roundtrip ping times within my LAN.

I think it is both, the router manages data through my LAN badly (I would like to test this more vigorously though) and the wi-fi signal is not strong enough (but as said in my original post, the walls are also a major wi-fi hinderance where I live). I agree, an added mesh system may be my only option (if I can find one that is compatible) and also a good option as I have heard good stories overall from people who tried such a solution.

Can’t you add a second router with better performance?

My ISP insists on their router connected to the modem for maintenance and diagnostic reasons. I run from their “grotty” little router to my TP-Link Archer 3 router which runs the house. It’s hardly hi tec , just a domestic standard router but I seem to have no issues

I guess I am just lucky

Mine is even lower at 20Mbs , it measures even less at around 13-15 but I never get dropouts. I run a Netflix stream as well with no issues, buffering etc. Not both at the same time I must admit.