Roon insists on tagging the Strauss Horn Concerto as something else 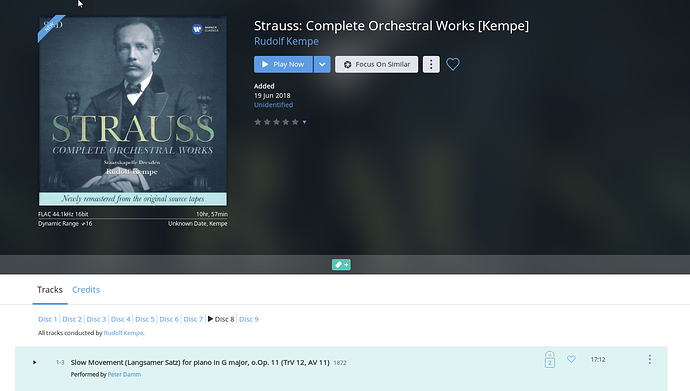 album is not identified, work tag is maintained as: 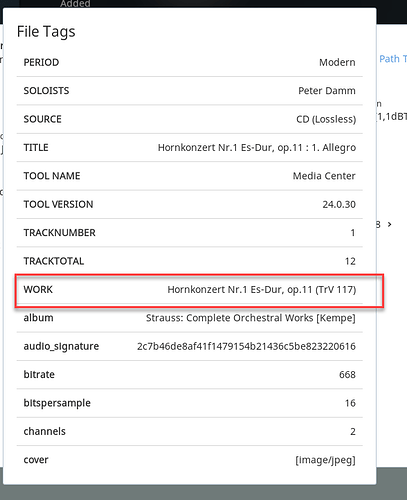 on this Szell album Roon also first insisted on identifying Don Quixote as some Strauss song.

Both wrong work hits have the same string for op.# because in fact they are works without opus (normally abbreviated as WoO).

The Strauss Horn Concerto is “op.11” - the strange hit is labeled as “o.Op.11”. Even adding other opus ID’s like the TrV does not help…

I also do not understand why Roon insists on matching the work for an unidentified album where I have set the preference to “file”. I don’t like Roon to keep telling me what work this is supposed to be when I know better…

another issue with the Alpensinfonie 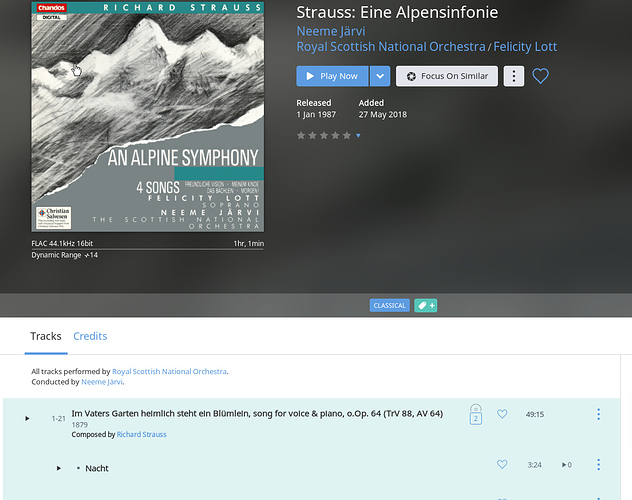 same file tags on both. Changing the metadata preference from Roon to File or backwards makes no difference once Roon decided it’s o.op.64… 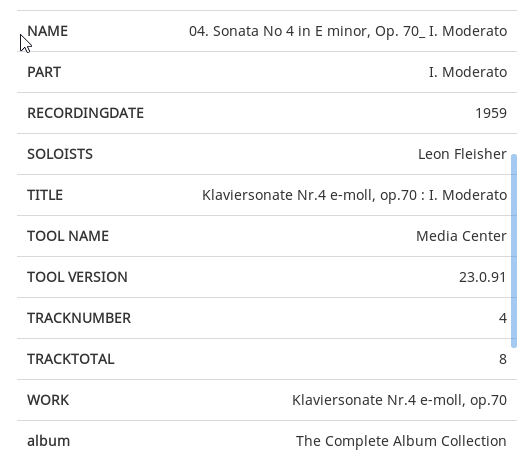 How Roon interprets it:

Hi, @Klaus_Kammerer1, thanks for your report! Could you please send us some media? I will give more details in a PM.

You are probably not going to want to hear this. Have you tried changing the work titles to the English form? I have had very similar problems and continue to have. It seems that roon is using more than the opus or catalogue numbers for identification.

It doesn’t fix the problem in every case but it’s worked for quite a few. A real pain especially if you only have the original language artwork. Pretty much then only thing to do is cut and paste from allmusic. So for that Horn concerto:

You are probably not going to want to hear this.

I’m afraid I’ll have to…

I had thought about this, too. But I’ll try to resist as long as I can…

Will try later and report

thinking about changing the work title tag to the english form according to Rovi is one thing… I always thought that’s what merging compositions is about?
I cannot manage to merge some of my file tag based composition into identified ones… They just still appear as separate compositions, while at the same time their respective links point to the same list of albums, omitting the ones that could not be merged…

How Big Is Your Library Music

thinking about changing the work title tag to the english form according to Rovi is one thing… I always thought that’s what merging compositions is about?

I find the composition merge quite hit and miss. Sometimes roon keeps my title and sometimes it replaces it with the (usually English) allmusic one. I don’t really understand the logic. Seems a bit random to me. This is completely infuriating when the PARTS are still in German or French etc. so I end up having to change those as well anyway

I also quite frequently get the other issue you mention in your link. Where I have two groups of 32 Boleros but when I click on them either they are both the same merged group or sometimes there will be just one single “orphan” composition. Again it’s all a bit hit and miss but I can usually fix the problem by “de-merging” any of my merges, moving the files somewhere roon isn’t looking so it deletes them from the library, flushing the library. then changing my file titles to match the roon one’s and copying the files back.

On occasion I have had to do this for every instance of a composition (that is, delete 32 Boleros, re-rag them like allmusic and copy them back). This is one of the reasons I migrate albums one at a time, as I find a lot of roons merging and association features don’t really work or are very awkard to use, so I just find it easier to align my tags with allmusic in the first place. It is far from ideal, a completely donkey way of doing things. But I have tried raising this and similar issues with roon as I know you have but they are unlikely to be addressed for such a small user base.

Having said all that, I would much prefer that composition merge could take care of this type of issue without so much manual intervention

I find the composition merge quite hit and miss. Sometimes roon keeps my title and sometimes it replaces it with the (usually English) allmusic one. I don’t really understand the logic. Seems a bit random to me.

Said it well again. It amazes me that Roon seems okay with this ambiguity. They refuse to document, at any meaningful level, the logic they are using.