My second M-system (G92DAB/MS200) does not want to work with the volume regulation integrated in the Roon software. I have tried x times in Roon with the Zones Settings Volume Leveling on and off. Even if I go into the settings of the MS200 I find no solution to the problem.
Does someone know advice?
thanks Stefan

Are you able to test it with Sooloos, and if so does the volume control work (so we have a baseline)?

If the MS200 connects to DSP speakers with speakerlink then Roon/Sooloos volume control is fine. It also works fine if the speakerlink is converted to old-school spdif and DIN comms.

I don’t know about the inputs on the G92 but if it has speakerlink IN or a comms feed is active then it might work.

Hi Nick,
The G92 is SPDIF + COMMS, it does not support SpeakerLink, I suspect the comms have not been connected between MS200 and G92… but need to Stefan to get back to my question to confirm.

Thanks for your contributions - I will test Sooloos tomorrow or Saturday and then I would like to report again - At present I am at my other place of residence.
Stefan

OK…it will just need a speakerlink to spdif/comms breakout lead then.

@Dukeofbloomberg, spdif alone will not get you volume control if that is all you have.

Confirm back when you get a chance.

An AC12 would work (SpeakerLink in, SPDIF + COMMS out).

I have now tried some variants, so far without success. I have the AC12 integrated and with various cable types and connections tried to set up a connection.

The AC12 I connect with a short LAN cable with the MS200. MS200 is of course also with LAN in the network and the sound goes over an optical cable to the G92.

Comm network: AC12 is connected to the one Comm port at the G92 with a Din 5pol Comm connector, and a other DIN connector at the second Comm at G92 goes on to the left DSP3100 Speaker. From there a Comm cable goes to the right front DSP 3100 and then it goos to 511 and from there to the rear speaker.
I have already tried the AC12 with a BNC cable with the G92 to connect, also without success.

Weiss someone like the optimal Comm cabling would be, so I can regulate the volume with the iPad in the Roon app. On / Off works with the Roon app and the music selection, etc. everything runs perfectly.

The AC12 has two Comms sockets. Which one are you plugging into? And with what cable? Try plugging into the other one.

Is MS200 set up correctly? Source configuration might screw with Comms, for example.

I’ve used MS200 and AC12 together many times without any trouble. There must be a simple solution here.

Hi Ludwig
Thanks for your answer and the support.
I hate this M-Comm system, I do not find it transparent or I can not make it clear. Master or slave? Which cable do I need from AC12 to G92, which plug - DIN 180 degrees or DIN 240 degrees. The two G92 has 180 degree connections, at AC12 the master is 180 degrees, slave 240 degrees. Do I have to make a single chain, i. Connect all devices to a circuit or I can use the second comm port of the G92 to AC12.
Is there some guidance in the forum? Or can someone explain this to me briefly? And even better, someone knows how I can adjust the volume in my configuration with the Roon app on iOS devices can regulate!
Thanks to all
Stefan

I use a simple Speakerlink to Comms cable for my MS200 into my G61R and volume on Roon works perfectly. It’s simple.
You have to have Comms so the products can talk to each other.

Hi Chris
This is new for me - there is a speakerlink to comm cable available? (M-product or DIY) So I do not need the AC12? Do you go with this DIN comm plug direct to the second comm at your G61.
Thanks

[quote=“Dukeofbloomberg, post:14, topic:16467”]there is a speakerlink to comm cable available? (M-product or DIY) So I do not need the AC12? Do you go with this DIN comm plug direct to the second comm at your G61.
[/quote]
Yes
Not if you have an SL-COMMS cable and connect by optical from MS200 to G92.
Yes

I suggest you call a competent dealer such as Rick at Audio Images and explain what gear you have and what function you need. You may be able to sell that AC12.

My cable was made for me by one of the tech people on hitchhikersguidetomeridian forum.
So I have a Speakerlink to G61R Comms cable and use optical out from the MS200 for the audio signal.
This works well and is cost effective.
As Ludwig suggests, a good dealer should be able to sort you out here.

@Dukeofbloomberg Sounds like you may have “Hide Volume Control in Roon” enabled in the MS200 Settings.

Check Settings > Audio > MS200 Settings and uncheck the option if you do. 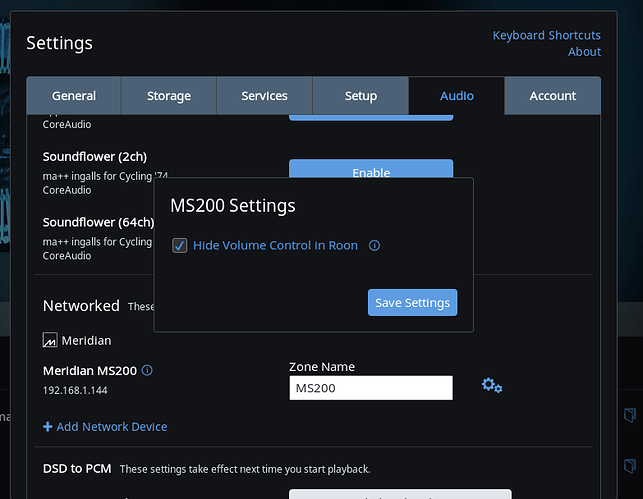