For context…I’ve got a Roon lifelong subscription and have long believed that Roon sets the standard for music player SQ. On top of this, we all know about it’s unmatched functionality.

Last night I thought I’d give the updated Audirvana 3.5 a good listen. To my great surprise I’m finding that A+ has now raised the bar for SQ. It sounds distinctly superior - more engaging and expressive than Roon. Sure, the UI is no match - but the musical reproduction is better.

This has created quite a predicament for me. I only listen to my music at native sample rates - I’m no fan of upsampling. But I can’t ignore the advantage A+ has over Roon. So I’m wondering…would HQ Player close the gap, even if I didn’t use it’s upsampling capabilities?

Thanks for any input.

Audirvana 3.5 does sound good on the desktop.

@jussi_laako should weigh in on your question.

I use HQ Player V3 with a microrendu in NAA mode, but it’s not in the same system as my Audirvana desktop (so I can’t give a direct comparison).

I’m no fan of upsampling. But I can’t ignore the advantage A+ has over Roon. So I’m wondering…would HQ Player close the gap, even if I didn’t use it’s upsampling capabilities?

Hi, if you don’t intend to use HQPlayer’s DSP at all, I can’t think of any advantage. You can try HQP for free though (30 day free trial) to hear, if you’ve never heard for yourself.

What DAC do you use? And what’s your current USB source/endpoint?

My front end is microrendu/st5 - schiit Eitr - Hegel HD25. When using A+ I’m using my MacBook Pro, through the network and then the microrendu.

I’ll do more comparisons over the weekend but so far it seems clear that A+ has a musical advantage. I might try HQPlayer for a month, as you recommend. I love the way Roon works so don’t want to lose that.

I might try HQPlayer for a month, as you recommend. I love the way Roon works so don’t want to lose that.

One example (check out the signal path): 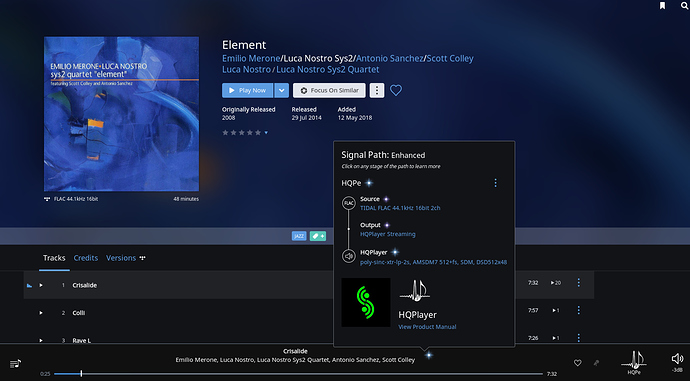 Slightly OT, but can the HQP NAA be run on a Pi? if so, can it be run alongside Roonbridge such that Roon sees two endpoints?

Slightly OT, but can the HQP NAA be run on a Pi? if so, can it be run alongside Roonbridge such that Roon sees two endpoints?

Roon doesn’t see the HQP NAA/endpoint directly… Roon will play to the HQP server as a Roon Zone, and you set the RPi NAA/endpoint in HQPlayer itself.

But yes, running something like DietPi, you can have RoonBridge and NAA both working. Just not at the same time of course.

Roon itself will only ‘see’ RoonBridge on the RPi. Roon will play to HQP as a ‘zone’ and HQP will be configured to play to whatever NAA/endpoint you select.

I probably did a hack job of explaining that - it’s much easier to understand once you get your feet wet with the free 30 day trial.

But yes, the RPi can run both RoonBridge and NAA with something like DietPi.

Thanks, that makes sense. Was forgetting about the HQP server requirement. Shame that my ROCK can’t run it.

Shame that my ROCK can’t run it.

So it can be done on your NUC (what model?) but then it’s no longer ROCK (Roon OS).

I tried Audivarna for the first time the other week as there was fuss being made about the new version. Would not consistently see any of my endpoints and when it did it would always drop out. So I could not actually test the SQ and have not bothered trying to figure it out. It reminded me once again why I hate uPnP.

I am also reluctant to let go of Roon’s ease of use, reliability and of course the fantastic radio function. All reasons why I bought a lifetime subscription.

Now I’m torn as I’m liking the new A+ 3.5 sound. It seems distinctly more crystalline, which is hard to ignore. Maybe just a passing fad and I’ll go back to Roon. Might give HQP a 30 day shot to see if I can have it all.

Yes, running Audirvana 3.5 on a 2013 MacBook Pro vs Roon on a Sonic Transporter server (Linux).

They both sound different with both playing to the microRendu over the network?

We know the bits are the same but the protocols are different (UPnP vs RAAT).

Don’t ask me how that can affect SQ though - I won’t even pretend to have a clue… even just thinking about the potential technical mechanisms at play.

Just decided to give A+ a rest for a while. It clearly sounds superior to my ears, in my system. But I just can’t handle the drop-outs and foibles. They’ll probably fix that eventually but for now it’s frustrating to have to keep rebooting it.

I have been using both Roon and Audirvana for quite a while, for very different purposes:

I have both Roon and Audirvana 3.5. Can’t say I hear much of a difference between the two. Maybe my ears aren’t good enough…

Not trying to mock you at all, just genuinely interested because I don’t understand these things: how can they both sound (so) different when they’re both bitperfect and played over the same gear and network?

If it’s the protocols (UPnP vs RAAT), then what exactly do they do so different, explaining the different sound?

Yes A sounds much better, more analogue and lifelike then Roon. Roon though has a much better UI. Would be great if this two got together and joined forces. Imagine A´s sublim sound with Roon interface and ease of tracking of music. The only thing we then need would be a easy to use Internet Radio, like in iTunes or the one from Radio Paradise. Now these three combined would be a killer combination.
KnockKnock