Roon vs Plex - a serious discussion

Roons always been fine for me and I have mostly wireless endpoints. I have Plex also had it for years for Video.

I have my library in it for remote access but seldom use it as I just don’t like the UI for music at all. The main Plex app isn’t great. It’s not great a cataloguing especiay comps too a bit of orj to fix them. Plexamp is a better UI but still has its shortfalls. They just added Pi support with a headless bridge which makes it easier to get it into a system but not as easy to get going as Roon. It’s lack of proper hifi integration is a main stopping point for me.

DSD is converted to flac it doesn’t play native and exclusive mode isn’t on windows for PlexAmp.

Enjoy it, if it suits your needs it’s better than most UPnP management software.

David have you looked at PlexAmp as a mobile client?
Have to say it makes Plex sing from a music perspective.
It’s not free though, it’s only for subscribers, but with the music analysis services it is great (though takes quite some time if your Plex server is not fast).

I am a big fan of that for when I am out of the house, though not great on PC or Mac so I tend to stay away from that. But it’s good if you have Chromecast, Airplay or Sonos as it works nicely with all of those.

In about 8 years with Plex I have had one major corruption experience and no real slowdown in regular usage. It’s not as good as Roon, but if I didn’t have Roon I would be happy with it

Have you tried JRiver, the JRemote app is good and solid. Same MultiRoom as Roon , DLNA may not suit everyone but I find it stable with my CXN

It handles just about every video format too

I cancelled Roon because of mainly connectivity issues despite hardwiring the core, using mesh nodes with Wifi 6, etc. It was just a lottery whether a complete track would play without Roon losing control of something. TBH, I couldn’t really be bothered to open tickets to try and debug. To my mind, it should just work, right?

Roon is much more reliant on your network than other apps. We’re sorry to hear that you weren’t able to get your networking issues resolved. We’d be happy to help if you’re interested. Just let us know!

Unless I am wrong, a very annoying issue with Plex music is that multi-artist compilations do not show the artist, so you end up only with the name of the song or “various artists” if you edited all the album. This makes it unusable in practice for me. On the other hand, hope that Roon makes true to show individual tracks’ artwork for multi-artist or custom compilations.

It’s doable but you have to edit to get there it’s not easy for some odd reason. I found you have to have album artist as Various to get a head start and you have to group them as one album. If you don’t then they are all separate artists and the album is split. 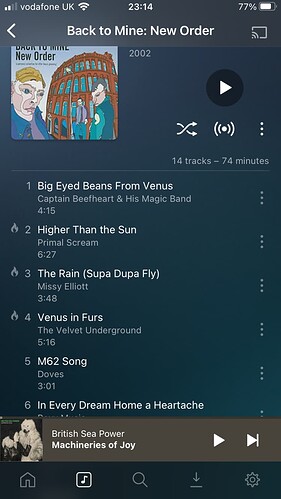 Thanks! I’m sure I did that with no success and no logical result several versions ago. Now that you are successful I will try again with the latest one.

Just to clarify as I suppose it is an android picture that is not familiar to me: you are showing/talking about plex or roon? I assumed plex…

Not sure why this is still a “serious discussion.”

Plex is serious about video. Audio is an afterthought.

Roon is serious about music.

Funnily enough this works for Me in Plex but not Roon
I sometimes have to do the @CrystalGipsy trick of editing albums and merging them but I do get this in Plex where on Roon I cannot find the various artists albums where the artists tracks are.

That was PlexAmp App on iPhone.

It depends on the Metadata, my example doesn’t show as Various in Roon as it’s logged it under New Order but all the artists show up in Roon that are on it. All my comps show correctly in Plex as I made sure they all worked correctly took some time.

Plex radio works well for me, given the same files as Roon to play with it delivers content I find preferable and it will do it all day on a work site. I wish Roon would do music on the go but Valence still has issues with it’s radio choices that Plex radio doesn’t.

Do the radios choose from streaming or local collection? I never use them as I rarely use the app unless away from home and then I tend to use UAPP on my DAP. Roon Radio at moment has taken another backwards step, they really don’t seem to know how to make Valence work properly yet. I am happy with its choices it just repeats too much and gets stuck.

Mine are flagged under Various but also flagged as compilation.
Roon and Plex work in different ways when dealing with this

Plex Radio or artist radio for me seems to pick from my library. I rarely listen to Radio on either platform, but in the office we have had a good few radio sessions on Plex and they have worked well, and without checking I would say I recognised pretty much everything as being from my library (more of an observation that a statement of fact)

In the case of Roon I restrict the radio to the library only but that includes Tidal tracks I have added personally. With Plex it gets to choose from the library which is mirrored on a NAS and there’s plenty to choose from.

Roon has a ‘favourite’ album which is a poor quality compilation of Ike & Tina Turner that it keeps defaulting to and it loves '80’s funk and soul compilation albums even if the original song and album are available.

Either one can deliver days of good choices given an appropriate starting point. Otherwise once Valence is reaching it seems to revert to it’s cheesy fav’s. Maybe it’s more like me than I want to admit!

One thing that surprises me with Roon radio is it’s capacity to play hours of Techno, I have loads to choose from but would struggle to present it that well. Plex can do that as well. One thing about Plex the choices are often more ‘sonically similar’ which is part of the analysis Plex carries out to determine track radio functions.

I have to say that the Sonic analysis has made PlexAmp radio and (re)discovery while looking at other artists so much better.

I don’t as I want to hear new music more than stuff I already have. Just tried Plex radio it’s just stuff from my library which is disappointing. This is where Roon is ahead for me warts and all. I can choose stuff from my own library to play it’s hardly challenging. We all have different needs I guess.

For you yes, and sometimes for me. But other times that actual new discovery is what I want. Options are good