After a reboot, Roon will no longer launch on my Mac - I see the splash screen and the Roon window appears with the animated Roon logo, but that’s it. Additional info:

UPDATE: Reinstall doesn’t fix the problem, nor does disconnecting all USB devices and relaunching the application. 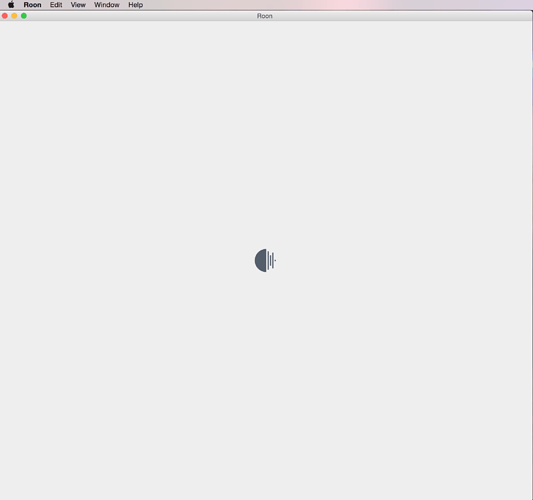 I think it might be performing a re-scan and may take a while … how many albums are in your lib?

While it sits like the screenshot shows, there’s no disk I/O coming from the Roon process, it’s using 27 threads @ 4% of CPU, and 148 MB of RAM.

Hi again, you could check the Roon log files to see if there’s anything obviously amiss, but I think you’ll need the help from one of the developers on this one.

I’m sure someone probably @mike will be in touch soon.

I also can’t log in to Tidal from the Roon app :\

As a test, you can first close Roon…then rename the Roon folder in your User Directory…e.g. Roon_Old

If this works, talk to Roon about ways to possibly recover the data in the original Roon folder

I assume you mean the directory in ./username/Music/Roon ?

I closed Roon, renamed it, and launched Roon. No effect.

Hi @yorktronic – I’ll be in touch shortly, and we’ll figure out what’s going on. Sorry for the inconvenience!

Correction: I’m an OSX newb and didn’t realize that the Library folder under username is a hidden folder. I renamed my folder as Ronnie suggested and now the app launches, though I don’t have any of the data from my old Roon database. I didn’t make many changes, so it’s not a big deal…

Yes, it’s the Roon folder in the Library [normally hidden] is the one I meant

If you wish, Mike and Roon may be able to help you “reactivate” the currently re-named Roon folder…or just start again, if you didn’t make many changes from the initial scan anyway

I had the same problem as @yorktronic in the last few days, and have now started again with a new Roon library folder. At this stage there were few if any changes, so no big deal - but presumably a watch-point for the future if we get into significant editing of metadata. Loading of the library still in progress, so fingers crossed…

I too have unfortunately had this happen to me. A power circuit blew that had my music attached to it. My Mac Mini with Roon was on a mother circuit and did’t go down. However once I got everything back up again Roon for some reason refused to start. Deleting the database as described above, and rebuilding got me back up and running.

A database back up/restore procedure would e nice. I haven’t done any tagging through Roon yet, and although Roon is quick to build it’s database, with over 7000 albums it it still took awhile to get back and functioning again.

Sorry gents, I was out of town and neglected this thread. Deleting the Roon library folder fixed my issue, and like everyone else, I wasn’t so far along in adding content / playlists for it to be too much of a pain in the…