There’s not much you can control on Tidal’s Home page in terms of content. Everything is what Tidal likes, wants you to see, which is heavily Rap based. About the useful part on the Home Page is the Suggested Tracks and Suggested Albums, which is based on your Likes. My comments for each of Tidal’s sections:
Featured - Low value due to priorities Tidal puts.
Mixes for You - Best part of Home Page. It’s based on my Likes.
Recently Played - obviously necessary and great to have
Suggested New Tracks - Great, based on my Likes or music I’ve layed
Suggested New Albums - Great, Based on my Favorites/Likes
Popular PlayList - Great, it aslo seems to be based on my history
Master Quality Audio Albums - So so, there’s no way to filter and pick the genres you like. At least the push the newest MQA Albums, although a good percentage is Rap.
MQA Playlists - Great
…
Popular Albums - totally useless

It would be great to see in Roon from Tidal’s individual user suggested content.

Albums>New: Majority is Rap and you can’t do anything about it.

I only see two rap releases on this screen. Three under recommended, ten in the Top 20, and three in Masters. These are on the TIDAL screen which displays 16 albums. Click on View All and it doesn’t change significantly. Do you want to share a screenshot?

Here’s a few screenshots and I know is not only Rap. Actually MQA has less Rap than any other. I have to click one by one it see what genres it is. 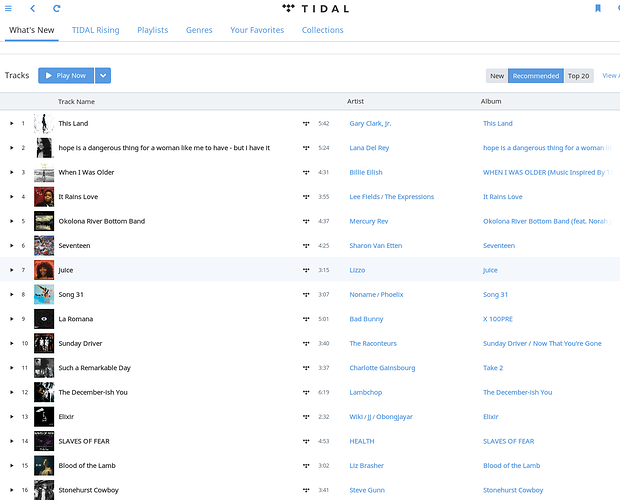 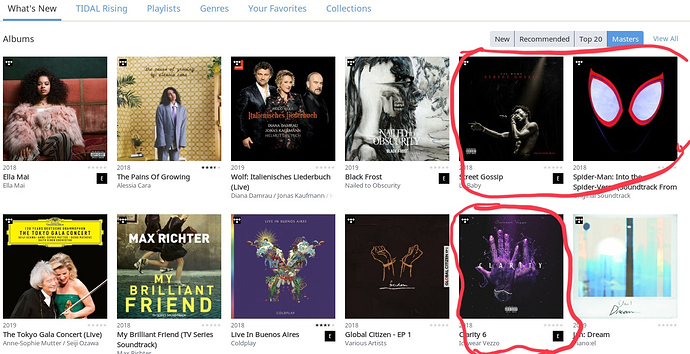 Out of interest, how long have you had a TIDAL account? My Top 20 only matched 6 of yours … I wonder if this is influenced by region and/ or play history.

About 2 years. Your questions then tells me that it will get better!

It might be that in the UK you don’t get so much Rap and Hip-Hop, but that might be due to Tidal’s owners.

Your questions then tells me that it will get better!

Maybe not, I been on TIDAL similar time.

But I do play a lot of TIDAL albums.

Do you play most of them on Roon or directly on Tidal? I wonder if Tidal captures the data of tidal music played on Roon. I would assume the answers is yes, but can’t be too sure.

Both, but mostly via Roon.