Hi @Max_Hudini, I agree that the drives are pretty good for music but your post raises a good point.

what it not help with is the performance of roon. before i had my files on 16tb ironwolfs.

This is likely true for the most part, reading an entire hi-res track from a conventional HDD is more than quick enough for Roon. SSDs have the advantage of being almost silent in operation (they do make a noise, if you “thrash one” and put your ear to it) compared to platter HDDs.

The factors influencing performance with a large library are:

If I may impose, how much ram? Any suggestions as to type, etc?

Any suggestions on how to migrate, trying to avoid over Ethernet as I’ll die of old age first.

Get a couple of USB SATA connectors and hook both drives up to a laptop or similar?

Looking to replace my Samsung 860(might be dying)
What is the difference in the Samsung 870 QVO vs the 870 EVO?
BTW it going into a Nucleus rev a.

Google is your friend here, basically, the QVO is a somewhat budget version, here’s the details:

Samsung QVO vs EVO vs PRO: What's the Difference?

This post talks about the differences among Samsung QVO, EVO, and PRO series, taking Samsung 860 and 970 series as examples.

the QVO is perfect for storage of audio files. QVO trades cell writes for capacity/$. Given that you will not be deleting/adding content in the thousands of terabytes on that 1 SSD, it’s perfect.

Very good point, if you’re just writing audio files and playing them then the QVO probably makes the most sense.

Samsung QVO 870 8TB is perfect for Roon. I have 2 of them (one for each Roon core, 2 different locations).

From a drive perspective there’s no difference whatsoever. All 2.5" SSDs are 7mm or less, so they’ll fit in anything.

There are NAS-specific SSDs on the market.
How much does it matter for NUC, Nucleus or Music Streamers/Players???
Which one will You choose between…?
1 Samsung 870 EVO (QVO)
2. WD Red SA500
3. Seagate Ironwolf 125

So in theory the NAS ready models are optimised, think lower power, improved reliability and the like. In practice, it probably made more sense for mechanical HDDs and this is just a bit of market-making. Given data reads and writes to a Roon music storage devices are pretty low volume I don’t think it matters.

Regarding which I’d choose. Speaking personally I’d not touch anything made by Seagate ever again. Either I’ve gotten ridiculously unlucky with their devices but in my experience, these go wrong, and other brands (reputable) don’t. YMMV. Samsung has been a/the leading name in flash memory storage for PCs for a while now, I’ve not had an SSD fail on me yet. Performance and reliability are still close to class-leading although some of the other manufacturers are a lot closer now than 5 years ago.

Well, QVO drives should only be used for storage. The WD RED can be repurposed as an OS drive. Like killdozer, have been burned by Seagate in the past and biased against them, so the Ironwolf would never even make it onto any shortlist.

Ironwolf would never even make it onto any shortlist.

I have a bunch (75 disk setup) of both WD Red Pro and IronWolf Pro (+ now lately Seagate Exos x16 + x18). I see no big difference in failure rate between the two brands.

Edit:
Reason for introducing Exos x16 disks, they have lately been sold at close to half price of similar models from both Seagate and WD.

Speaking personally I’d not touch anything made by Seagate ever again. 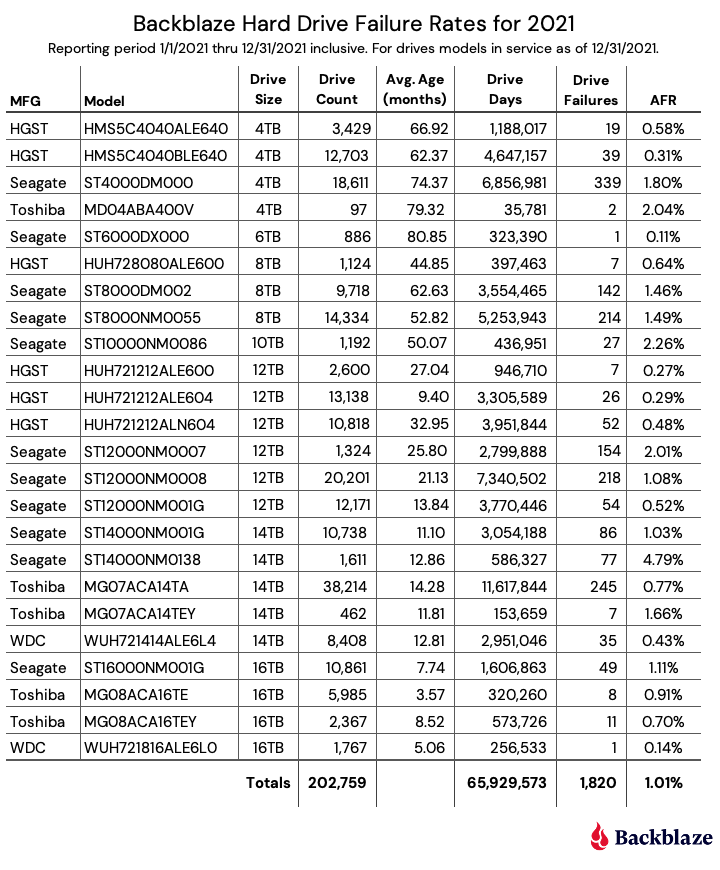 Last quarter, we reported on the state of our 14TB Seagate drives (model: ST14000NM0138) provisioned in Dell storage servers. They were failing at a higher than expected rate and everyone—Backblaze, Seagate, and Dell—wanted to know why. The failed drives were examined by fault analysis specialists and in late Q3 it was decided as a first step to upgrade the firmware for that cohort of drives still in service. The results were that the quarterly failure rate dropped from 6.29% in Q3 to 4.66% in Q4, stabilizing the rapid rise in failures we’d seen in Q2 and Q3.

I had 4 Seagate 3TB drives fail within weeks of each other. This was the explanation:

Seagate is facing down a lawsuit on high failure rates on its ST3000DM001 HDDs. Reports from corporate users indicate the drives fail quickly, and not according to typical patterns.

As I said, YMMV, but I’m sworn off Seagate.

I had issues with the same 3tb drives…many many of them. All too late now but they were a lemon at the time.

but they were a lemon at the time

The worst kind of lemon, cheap lemons. Despite the old folksy cliche they made crap lemonade…