SD Card Issue or Something Else?

I’ve installed Ropieee on a few different cards without issue, but I’m having a heck of a time with a Lexar 32GB card. I’ve formatted and re-flashed it a number of times. And it keeps getting stuck: 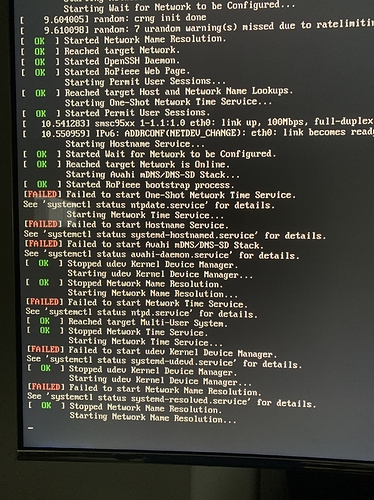 I can install DietPi without an issue (and have subsequently done so to get this Endpoint up and running). Is it the card? What am I missing?

It’s an RPi 3. Not the latest model though.

This is indeed strange. Looking at the messages it seems that there are network issues.
So this happens again even after reflashing?

Every time. I did another one hooked up in exactly the same manner without issue, although not hooked up to the same Pi, so there are a few extra variables at work.

DietPi is working, but then, I configured the txt file beforehand to use WIFI.

Maybe it’s something to do with the Ethernet port on the Pi. Just wondered if anyone had seen anything similar.

Don’t devote any time to it. I’m up and running.