If I search for “Matthew Passion” Roon correctly finds Bach St Matthew Passion as the top result, and correctly identifies this as a composition with 108 parts. But Roon then lists 1007 performances of the composition from Qobuz, most of which are only of one or two parts of the composition rather than of the whole composition. This makes the composition view next to useless for classical works like this. Please, you need to sort this out. When it only applies to your own library a search result like this is liveable with, but I have Qobuz which scales the issue up. You simply cannot expect anyone to scroll through 1007 possibilities most of which are incorrect. 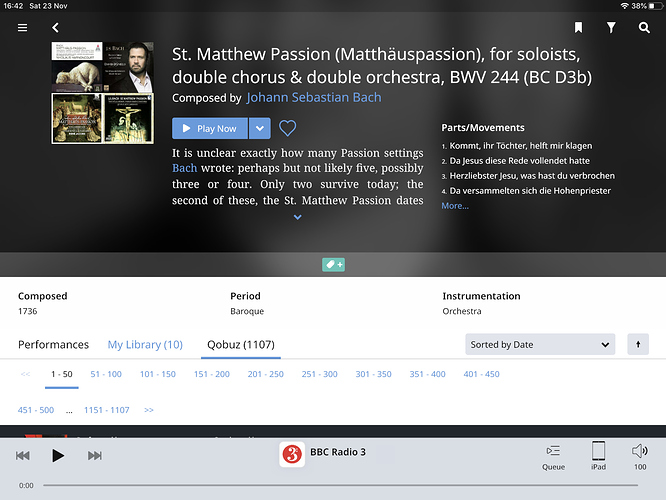 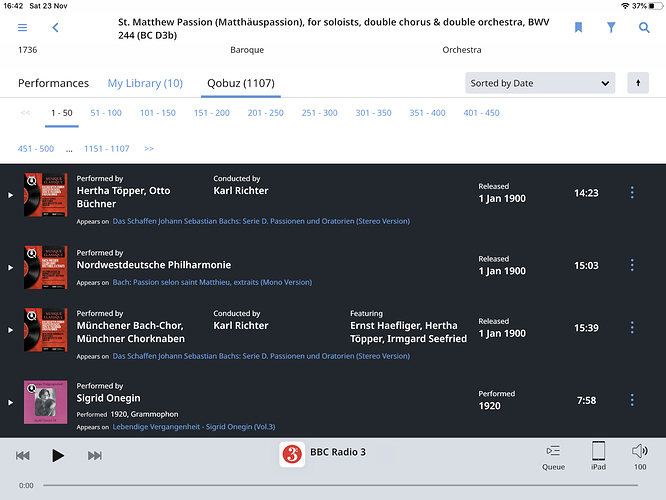 @dylan Dylan, this is NOT a metadata issue, every single classical work behaves the same. Hundreds and hundreds of the more popular works will also have individual songs or movements from them on “best of” or “selections from” or “recital” type albums. These should not be treated as instances of the composition, any more than any album with “Yesterday” on it should be treated as “Help!”.

Please explain why you think this is a metadata issue.

@Jez I totally agree with you on this issue.

If Roon doesn’t want to do anything to solve the messy results the two current streaming services seem to offer than it may be right to think of it as a metadata issue … “they don’t give us the data needed”. Of course, it would be possible to do better and there seems to be data out there to create meaningful results for a Performance tab, like idagio shows: https://app.idagio.com/works/1018149

Now idagio also curates its metadata manually, I think – something Roonlabs doesn’t want to do. I’m not very confident that this will work out but some improvement might be achievable with automatic data treatment nevertheless. There are for sure some indicators which could be used to conflate multiple album / set issues of the same performance into a single result (maybe with some kind of drilldown, in case there are different masterings available). Without giving more emphasis to the actual performance (which is the name of the tab, not “Albums where the work may be present in some way or the other”) things won’t improve.

(And I don’t think that is a request for a new feature, more a hope that an existing feature continues to mature.)

I moved this to the Metadata Issues section of Community since the data display in Roon. While I understand it’s not necessarily an issue with a particular piece of metadata, this is something that the metadata team will be looking into. I’ve forwarded your feedback to the team for further investigation and I’ll be sure to reach out when I’ve received their feedback.

This one’s sticky. Roon determines what is a composition with its own algorithms. But it only does so with those albums that are part of your library. And it would be impractical to extend the composition detection to the millions of albums in Qobuz and TIDAL.

So, Roon searches what QOBUZ and TIDAL give it. And Roon has little leverage (yet) to compel the streamers to clean up their metadata.

So what to do? I know they would appreciate your ideas.

Do you have a suggestion on how this should be fixed? A composition is not the same thing as an album so you can’t differentiate it that way. How is Roon to know that the composition is complete or partial? How is it to know what release is complete and which ones are not?

Why not use what is already provided byAllMusic? If you go the Johan Sebastian Bach page on AllMusic.com, select the Compositions tab, and browse to the St Matthew Passion, you will see: 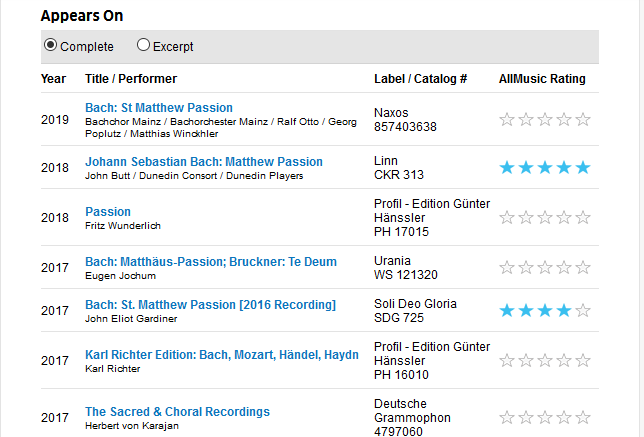 Note the choices offered under Appears On . It seems to be exactly what we are after here. Most of the metadata in Roon come straight from AllMusic. AllMusic is able to discriminate between complete performances and excerpts. Can’t Roon tap on Allmusic here ? What is the problem here ?

Good suggestion. Roon, by itself, can’t know what is a complete composition or one that is just an excerpt. I am not sure how AllMusic knows and if they push that data to Roon. But, if Roon could leverage that data, great. Roon would need to add the radio buttons for “Complete” and “Excerpt” as well.

Roon determines what is a composition with its own algorithms. But it only does so with those albums that are part of your library.

Actually… Some compositions are determined for us by metadata providers; others we synthesize.

And it would be impractical to extend the composition detection to the millions of albums in Qobuz and TIDAL.

We do exactly this and have done so for several years now. If you see a TIDAL or Qobuz album with composition information, it’s almost certainly down to Roon processing and not what metadata the streaming service gives or does not give us. Typically, streaming service compositions are the result of our either matching up the entire album to one where we have composition details, or figuring out from individual tracks what the composition is (and matching to canonical compositions where possible).

Where we’ve been limited has often been due to a lack of track composer metadata. Using Valence (machine learning) technology to pull in more composer credits with known confidence has increased the number of compositions that we are able to identify/create significantly.

Believe it or not, we now have so much composer information, we’ve had to limit the number of compositions/performances we create, to prevent (e.g.) every non-canonical (mis)spelling of Eine Kleine Nachtmusik showing up as a one performance/track composition. We know that such loners exist already and we need to do some better (more aggressive) normalization to “clean-up” single-performance compositions.

We’ve also heard people complain about their inability to pick out complete vs. partial performances of compositions. We’ve had these discussions internally, within the team, and felt that, for now, given that it is now possible to sort by performance popularity, we would err on the side of maintaining the status quo and including partial performances. But we understand the problem and are looking for a good solution.

People seem to fall on bath sides of this. I personally do want to see both complete and partial performances, but I would like to be able to distinguish or sort them in some way. Not that I know much about these things but the rovi api does seem to have an “excerpt” flag. Is this generally populated? Also populated correctly? I get that it’s not much use if it is empty or wrong.

We’ve also heard people complain about their inability to pick out complete vs. partial performances of compositions. We’ve had these discussions internally, within the team, and felt that, for now, given that it is now possible to sort by performance popularity , we would err on the side of maintaining the status quo and including partial performances. But we understand the problem and are looking for a good solution.

Thanks @joel for your understanding. The sort by “performance popularity” does not help find the complete composition, at least in the case of Qobuz’ 1107 results for the Matthew Passion - the whole work still appears mixed up with many different arias or excerpts.

If you can’t identify complete compositions from the metadata - something that may indeed be tricky with classical because of variant performances - can I suggest using the duration. It seems pretty obvious to me. A big piece like the Matthew Passion or an opera is of the order of two and a half hours long; individual arias from it are a few minutes. A symphony or concerto is typically 20 - 40 minutes; an movement a quarter of that. So if there was a way of filtering or sorting by duration that would probably give a good result. Your search results already show duration, so you must be able to exploit it. What does not make sense at the moment is that you quite correctly describe the Mathew Passion as having 108 Parts/Movements but then show a single aria lasting less than a minute. At 4 or 5 performances per iPad screen, 1107 possibilities is 200 screensful …