Today I had cause to fire up my pre-Roon, BubbleUPNP/OpenHome based multiroom music system and was reminded of how much I miss receiving metadata on my Chromecast devices when using Roon.

The best illustration of what I’m talking about is probably to take a look at the Onkyo receiver in our lounge/theater and the differences between Roon and BubbleUPNP.

The Onkyo TX-NR676E has built in Chromecast audio support (along with Air Play etc). When playing to the device from bubbleUPNP the display on the front of the device correctly indicates the currently playing track name (albeit in rather low resolution) and if I have the projector running a now playing screen is shown incorporating the correct album, artist, track, progress and artwork. 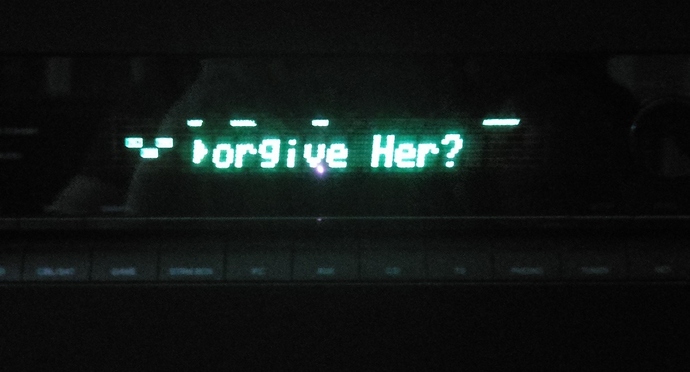 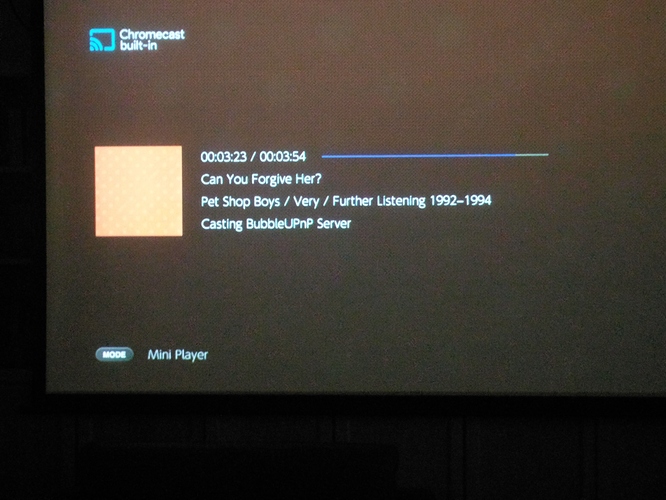 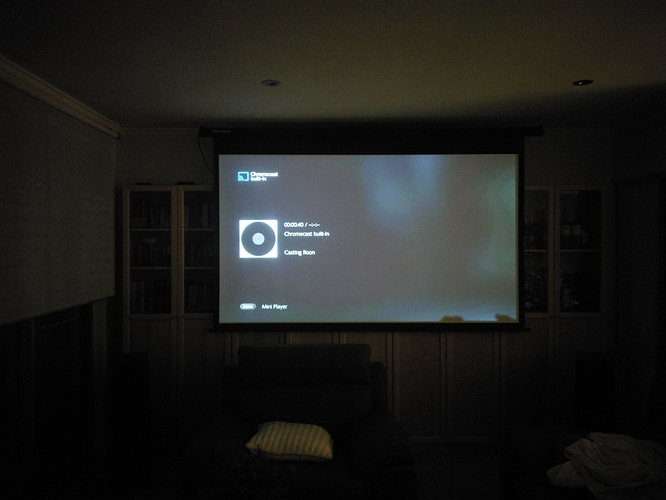 The same situation goes when viewing the status of Chromecast devices from Google Home etc.

Our OpenHab home automation system can access all of the Chromecast devices around the home and when I check out the diagnostic information being received by the system I see the following: 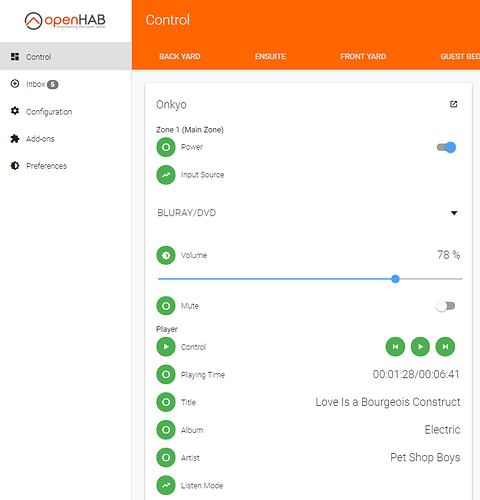 Roon doesn’t appear to make much of an effort… 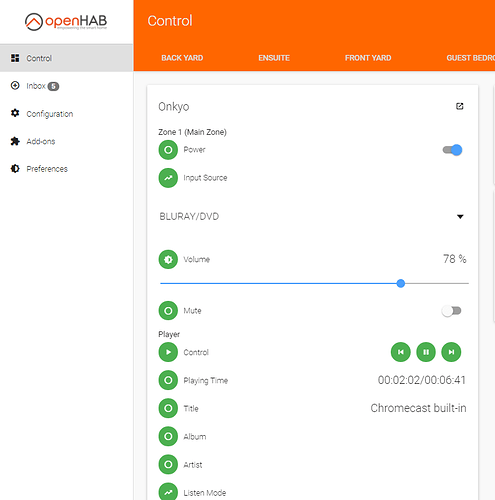 NB: I think that the Chromecast Builtin is a default value displayed in the absence of anything from Roon, not actually supplied by Roon. If you take a look at the projector screen image above you can see the text “Casting Roon” which may be the only data roon is sending.

IIRC: I’ve tried using AirPlay from Roon with the Onkyo before and found that the correct metadata was sent. It doesn’t suit me to use AirPlay because reasons.

It would be terrific if Roon could update Chromecast audio support to send additionl metadata.

Aaah. It’s nice that this just works by default using a regular chromecast. I have a bunch of Chromecast Audio (discontinued everywhere except Australia) and Chromecast built in devices. This probably goes part way to explaining why no attention was paid to sending the actual metadata to the CC devices. When populated correctly this metadata is also available in other places such as Google Home devices. Hopefully it won’t be too difficult a change to provide this data.

FWIW this is not a deal breaker and I’ll continue to enjoy my lifetime investment in Roon without the metadata if needs must. It’s just a little jarring when other apps accessing the Google ecosystem provide this and Roon does not.

I think it is not the same. As far as I know, Chromecast Video simply renders HTML page served from ROON, OP case is different.

?? That is the point I am making. Post title is chromecast devices not chromecast built-in.

I think the answer for you, might be to keep the audio streaming to the built in and add a chromecast via hdmi. On the hdmi chromecast set the web browser to display Roon. And then set the endpoint to enable display.

In settings, Under Display, you will see the URL for the Stream Roon provides. Copy that to the Chromecast Webpage.

Thanks. Distinction noted. I’ve updated the title to read: “Send correct metadata to Chromecast Audio devices” though I expect there are places during playback such as your phone where you would see the correct use of metadata appear if it were supplied even for a regular Chromecast with HDMI.

Do you see that in Google Home and on your lock screen?

Due to how the Chromecast protocol currently works, we can’t send more detailed information.

I explained why here:

Album, Artist and Track name not shown on Chromecast built in receiver Support

Right now, Chromecast devices do not support updating metadata during playback, so this information can only be updated when a track stops or starts. In order to support gapless playback, Roon sends audio to Chromecast devices (and other protocols) as a continuous audio stream, so there are no track boundaries at which we could update the information displayed. Unfortunately, there’s no way Roon could send this information and keep it up to date on these devices while also supporting gapless pl…

Thanks for the explanation. I had wondered if it might be tied in with how Roon sorted gapless playback on the Chromecast. A feat which other products don’t seem to accomplish. In a trade-off between gapless playback and updated metadata, I’d vote for gapless playback every time.

Yes, me too. But there also could be a switch in endpoint preferences, which could disable/enable gapless and therefore enable/disable metadata on Chromecast Audio.

Yes, me too. But there also could be a switch in endpoint preferences, which could disable/enable gapless and therefore enable/disable metadata on Chromecast Audio.

True though I’d imagine that this may cause more support headaches than it would solve.

Perhaps setting the coverart to be the Roon logo would be cool?

Hmm… If I ask Google to “play triple J radio on the livingroom amp” I actually see the metadata updating with current song titles etc. There is no noticeable “gap” in playback while this is going on. This is implemented by Google so I expect that there is something about the api that they’re not telling us. Perhaps some network sniffing is in order.