Separation of "Albums", into Albums, Singles and EPs

A feature I would like is the possibility to separate Singles (or albums with only one track in digital speak) into a “Singles” category and not grouped into Albums. If something similar could be done with albums that have “EP” in the title into an EP category even better.
For eg. the roon library says I have 983 albums. Actually, no I don’t. I have many singles and EPs.

You can set Album Type in the Album Editor, including EP or Single: 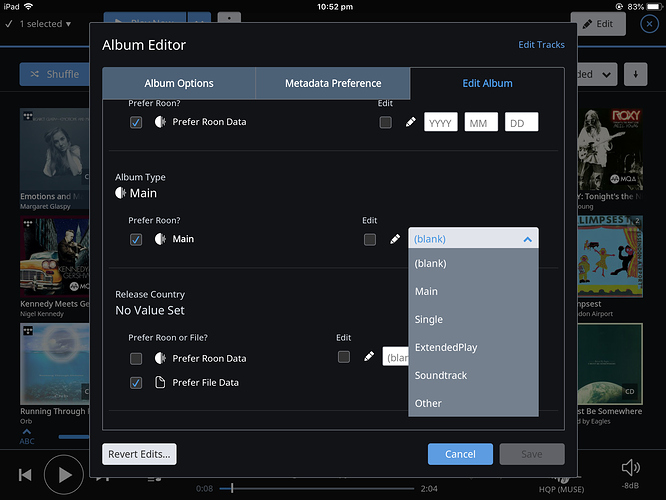 You can then Focus on Album Type in Focus/Album Type: 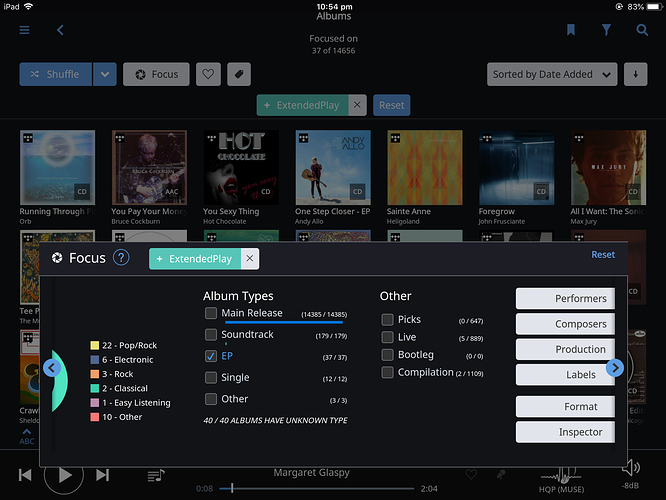 Do those capabilities answer your request ? If so I’ll close this thread. If not, please describe what else you would like to see.

Ahh, thank you Andrew. Yes it does for the most part - although would it not be possible for roon to automatically set the album type according to those criteria? EG 1 track = single, “EP” in title = EP? Or even from metadata where a release is known to have been an EP or a single release? I have a few dozen of each so manually doing it isn’t too much of an issue, but it is quite hard to distinguish them by sight. If there are hundreds in a collection it would be quite tedious as well.

Adding one or two tracks from an album doesn’t make a single release … it’s still an album release with some missing tracks. Unfortunately, if Roon were to accommodate one person’s preference it would no doubt be unsatisfactory for others. For instance, what would happen if you later wish to add the entire album to your collection?

Adding one or two tracks from an album doesn’t make a single release … it’s still an album release with some missing tracks. Unfortunately, if Roon were to accommodate one person’s preference it would no doubt be unsatisfactory for others. For instance, what would happen if you later wish to add the entire album to your collection?

Not if the album tag isn’t the name of the album the track is from. It would be the title tag, only matching the album name it was from if it happened to be a title track of the album. If the entire album were added later, it would be a separate album entry with >1 track.
I’m sure most people wouldn’t mind if a single track “album” were automatically to have the album type set to “Single”?

I think you’re probably oversimplifying things–and I’m sure others have a better grasp of the Meta data than me–but tagging is not how Roon identifies one Release from another.

To give an example, I have the single release of Land of Confusion by Genesis and this also appears on their Invisible Touch album plus a number of live albums and compilations for good measure. Roon identifies each as belonging to a specific release or release group (different versions of the same album.)

You are requesting that this relationship is broken and an orphaned track is reclassified as an (artificial) single … it’s not, it’s one track from one release whether that’s a “true” single, EP, bootleg, album etc.

Roon does populate Album Type according to metadata. I have 37 EPs and 12 Singles in my Library and Roon has automatically selected the Album Type for each of those.

The Album Editor menu enables users to specify Album Type for Unidentified releases, correct any metadata errors or create their own scheme. In the latter case I think the user would have to specify what they want if it is outside the release metadata.

If you wanted to specify every Album with one or two tracks as a Single you can do it as a batch as follows:

You can bookmark any Focus setting(s) so it can be recalled with a click.

Yes, and let’s not forget to add bootlegs as a separate category too (by which I mean that bootlegs can be displayed in their own section also, separate to albums). And collections/anthologies.

Righto I will give it a go next time. Unfortunately my free trial has now ended and other priorities, and a few functions not quite working as they should, have meant I won’t be subscribing just yet.
Thanks for the ideas though.