Believe it or not there is still a cult following of the videodisc or laserdisc or whatever they called it back then.

About 5 years ago, I sold my broken Laserdisc player along with about 30 discs to a budding nerd in high school.

Ok Ok well; I was into Laserdisc players back in the 80’s for movies only. They were just like giant CD’s! Then later they had concerts on them as well. Some of the disc’s had ``’Laser Rot” and eventually failed to play.

So Uwe, your TurnTurntable has a Laser instead of a Cartridge/stylus set up? Well if that is how you play vinyl as well, that’s pretty cool as you should eliminate my two biggest issues with vinyl…tics and pops from either dust or poor quality vinyl or cleaning and then having diamond stylus wear a pattern in your collection so that every time you change your stylus, you must replace it with a stylus that has the exact same dimensions as the previous one or suffers new wear issues.

I still have it. In my store room.

Here is my rather modest setup consisting of a Pioneer PL15D with Ortofon Blue cartridge, entry-level but proper Onkyo and fantastic Vifa Vivace speakers from 2012. And relating to this topic a HifiBerry DAC+ on Pi4 hidden behind the amp. I use it for Roon and Qobuz Studio and loving it. The Roon Core is an 10+ years old Intel C2D desktop hidden deep away in a closet in the hallway. 6Gb’s of RAM and Roon is on an SSD. If you want to know how that works: it works and I can group all three endpoints but I cannot use upsampling with it. So that’s the bottleneck. Just grouping works fine.
Total cost (please be seated): 200 euros including cables and other small stuff.
Pretty pleased with myself having this in the house 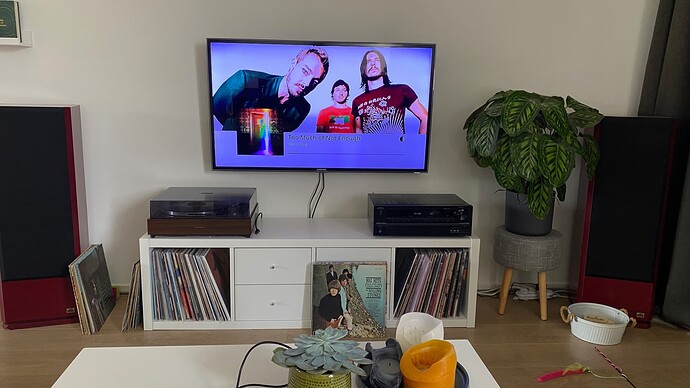 My brother had the same record deck playing into an Armstrong integrated Amp and a pair of Rogers Speakers. It sounded terrific (to my ears) and started me on the “hi Fi” road (to ruin​:smirk:). It is not the cost of the system that is important, but that it gives you listening pleasure

Just updated some equipment in my office/gym desk setup:

Replaced the Apogee Quartet with a RME Fireface UCX II and also added a Matrix Audio X-SABRE 3 DAC/Streamer + a Raspberry Pi 4 Display running RoPieeeXL to show the X-SABRE 3 Metadata because the X-SABRE 3 screen is too small to show metadata. The Matrix Audio mini-i Pro 3 stays on the desk as headphone amp/streamer. 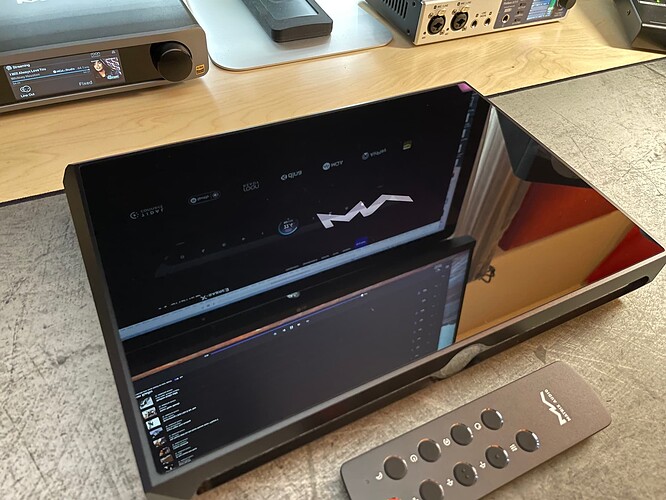 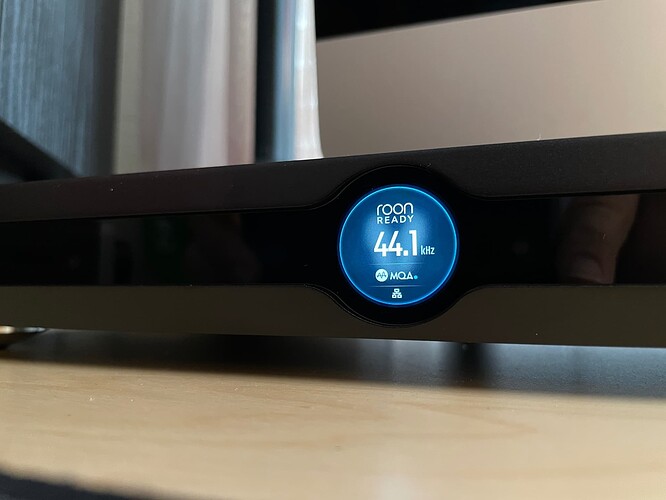 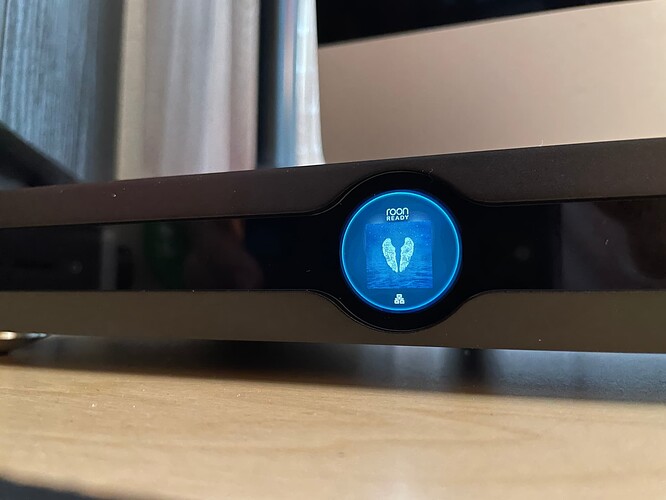 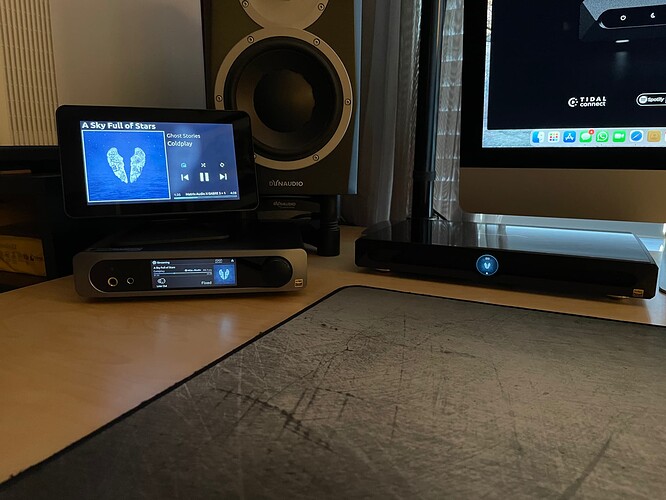 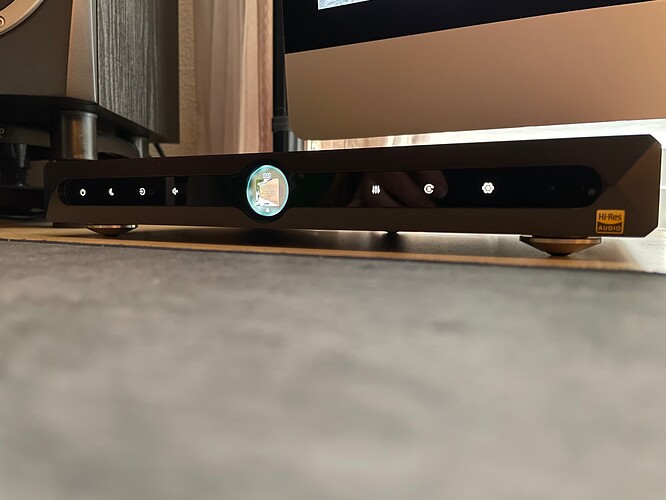 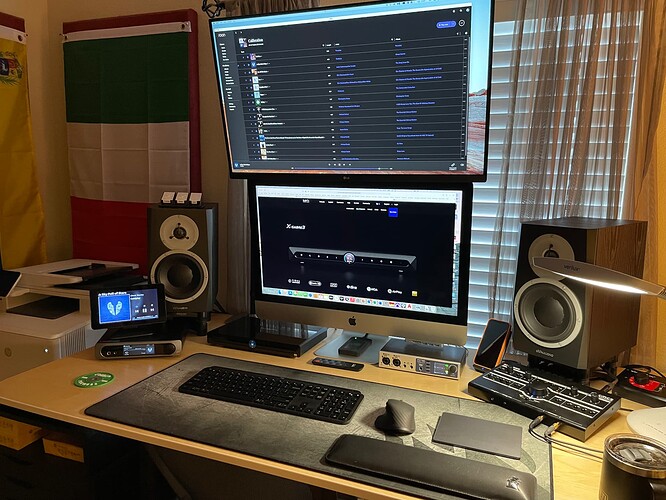 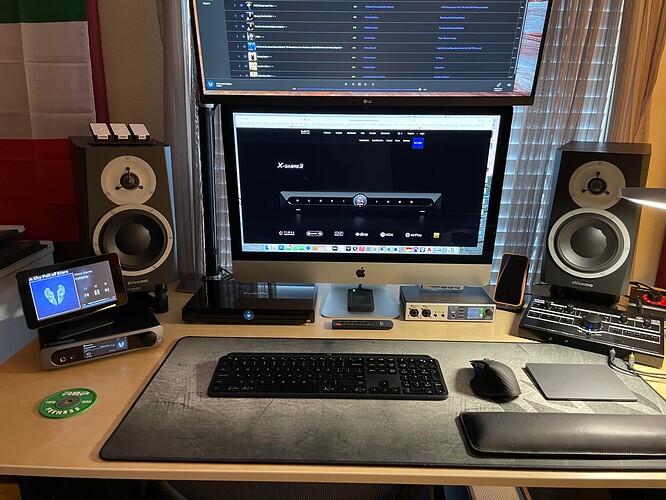 I’m done with updates for the rest of the year

Famous last words…lol
Not sure how you keep your office area looking so nice and tidy though, I cant!

Replaced the Apogee Quartet with a RME Fireface UCX II and also added a Matrix Audio X-SABRE 3 DAC/Streamer + a Raspberry Pi 4 Display running RoPieeeXL to show the X-SABRE 3 Metadata because the X-SABRE 3 screen is too small to show metadata.

Nice! The X-Sabre3 feeds the Dynaudios?

Or the Fireface feeds Dynaudios?

Both, the Fireface UCX II and X-SABRE 3 pass through the Drawmer CMC3 monitor controller and from the CMC3 to the Dynaudios and to the Rythmik Audio L22 subwoofer. 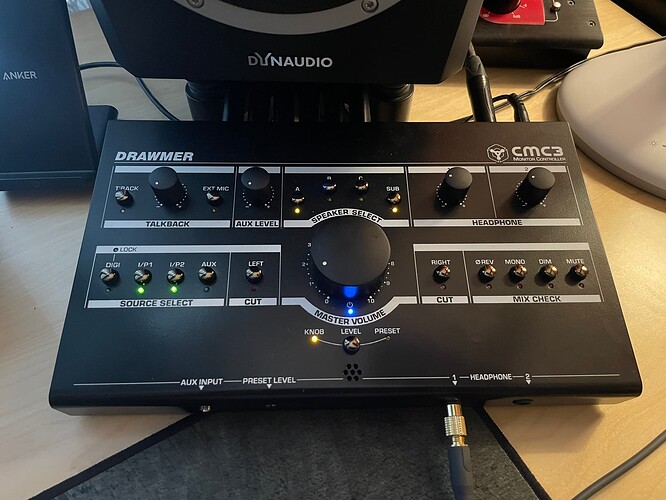 It’s a definite hot mess but completely bad a$$ SQ and functionality.

Two TT, both with completely different characters , one with a very high end MM cart, the other with a medium high end MC cart.
Three head cassette tape deck.
Oppo bdp-103 for the odd CD, DVD-A and BluRay audio discs.
Lumin T2 for serious Roon streaming.
iFi audio Zen Stream that I am working with as the final idea is to place into the living room system.

Maybe for Christmas I might treat myself to a new double wide rack and try and tidy it all up a little more. 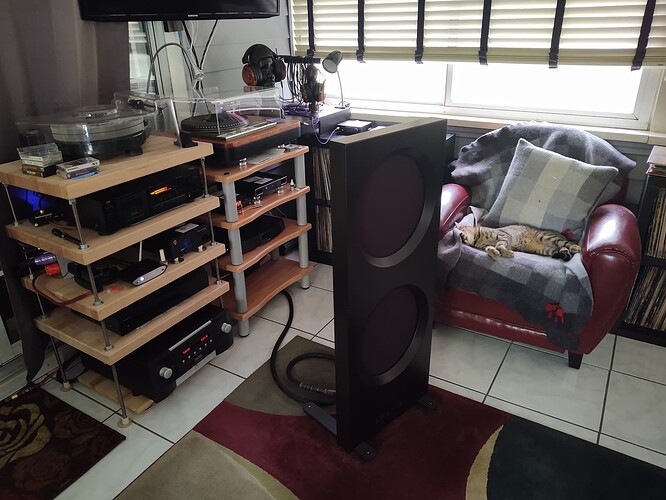 No. Do not tidy up. It looks like a dude’s room. Clearly the cat agrees. It is a very cool system. Years ago, I had a Harley in the home thearter. Have a photo somewhere.

Found it. The little urchin with the pacifier gets married next week. (Heavy sigh) 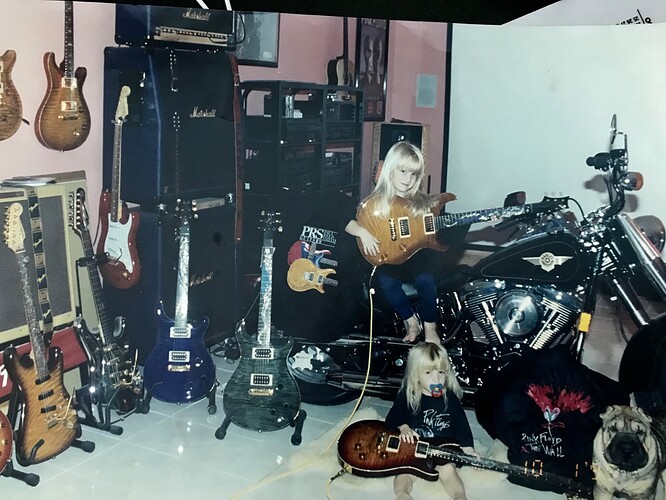 Priceless. All the best for her then! great picture.

What a gem of a picture!

Where does time go to!
I still think of my daughter as my little girl even though she is 21 and living in Hawaii now.

The Harley reminds me of days in England during winter when it was so cold I would drag my bike into the kitchen to work on it.
Just had a tiny back yard with an even smaller shed in it!
Still amazed at some of the work I managed to get done in that shed which was probably 4’x3’!
More than one engine rebuild…lol.

And the better half never ever complained bless her!

My wife is an enabler. She encourages my frivolous spending. Had many Harleys. The one in the photo was the final one. My first bike was a Triumph Bonneville.

The kids were small but loved Metallica’s “Black Album”

Was great to listen music back then in that environment with the bike. Yes, the kids grow up and leave as though they have a right to their own lives. Hint: they do not.

What an AMAZING picture. I also have three girls, my little one started last week Grad School (she is 22 this Nov) The middle one is 25 and works as a nurse in the PICU in Memorial Herman Children’s Hospital in Houston and the oldest one is happily married with two kiddos

Oh my, are those cassettes I see there on the top shelf?

Absolutely!
At last count I have approx 670 of them.

What can I say😝

My kids moved away. They are emotionally close to each other but not geographically. Three of them took music lessons (guitar, flute, drums, sax, violin, piano, trumpet…etc). Only one of them plays an instrument today…and only occasionally.

Their generation was the MP3 era, and their interests were not in music except (mostly) that which occurred in their generation. All had small stereos in their bedrooms, all had XMs in their car, all have SONOS…but they become consumers of minimal music.

I would get them Qobuz and Roon in a heart beat, but it is not wanted.

I never pushed music reproduction in the home. Music was always there, always playing. I do not think that two of them even have a favorite genre, group etc.

The contrary in my case. All three of my daughters are singers. The are called in our church “The Three Marias”

Their names are Maria Paola, Maria Grazia and Maria Alessandra

They sing every Christmas Eve service at the church we go and where I work as a Sound Engineer/Technologies Manager for 11 years already. 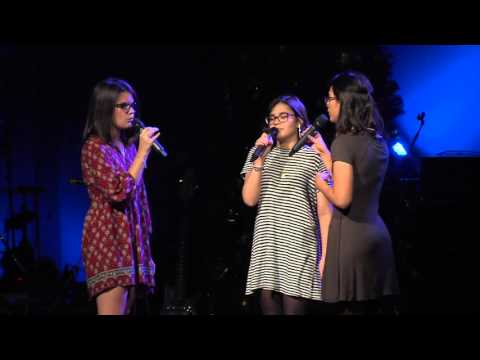 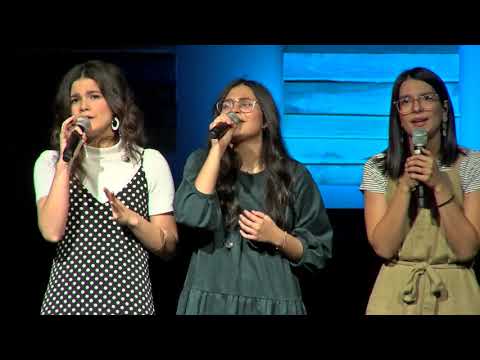