Shuffle Not working to Expectations

I am having some issues with Shuffle that seems to be a discussion on the boards, but I cannot find a resolution if one exists.

In the Christmas Genre I have 153 Christmas albums. I am noticing that there are many songs that are skipped and never played and there are other songs that play all the time. For instance shuffling Christmas plays a lot of the Mahalia Jackson album “Sings Songs of Christmas” but never the Dolly Parton album “Once Upon a Christmas” There are lots of other examples, but all the same issue. Any suggestions and or advice would be greatly appreciated.

How are you selecting them to shuffle?

I go to Genres, then click on the Christmas genre and then hit shuffle.

The best way I’ve found to make it more random is to add all of the tracks to a playlist and shuffle that.

Thanks for that. I will give it a try. Also will try a Christmas focus list and see how that works. Hopefully Roon will work on their Shuffle algorithm. Thank you!

I’m coming from the other end of the spectrum and can’t seem to disengage “shuffle” in order to play the list of songs in the sequential order that they appear in my playlist. Greg

Go to the queue screen the shuffle control is there.

That’s the playlist screen. Look at the queue screen for the shuffle toggle.
This symbol

I am not finding the “queue screen” ? Is this it? 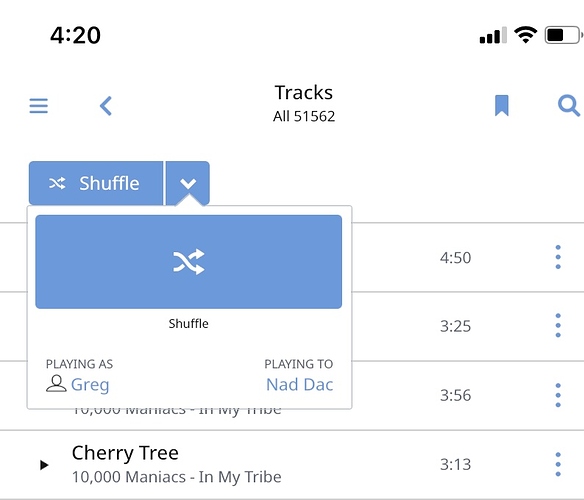 Hey Ged, Happy Holidays! I tried adding all of the tracks to a playlist and shuffle that. Shuffle exhibits the same issue of not playing certain album songs and repeating others. There appears to be a fundamental problem in the Roon Shuffle algorithm. This issue does not occur with iTunes most other players. Hopefully the engineers can work to resolve,

I’ve noticed that when shuffling a bookmark, roon sometimes pops up the track thumbs up/down dialogue, as if it’s using the same Vidalia or Valencia or whatever algorithm that roon radio uses.

Your observation seems to be further evidence of that, because there are numerous discussions about similar behavior in roon radio.

That is what I am seeing in genres or bookmarks. If I take all the albums and put them in a playlist it shuffles properly. Hope they will work on genres and focus bookmarks.

The essential problem is that people should NOT actually want a truly “random” shuffle.
Random outcomes can have clustering.
The chance of throwing snake eyes with dice is 1/36. Some people thus might expect snake eyes (using random outcomes) to happen every 36 throws. But reality is that you should expect short runs of sequential snakes eyes. And gamblers in a game of craps will sometimes bet on that.
Same for tracks in albums. If I have tracks from 15 albums people expect a song from the same album approximately every 15 tracks (even distribution). In reality, with truly random selection, you can have multiple tracks from the same album close together and tracks from other albums not played for a long time.

What I have is a script the shuffles M3U playlists but if an artistname or songname is randomly selected, but was recently played, it is left in the not-selected state and I repeat the random selection.
The result is intentionally NOT actually “random” - but the result is what I personally want in a “shuffle” with more even distribution of the artists.