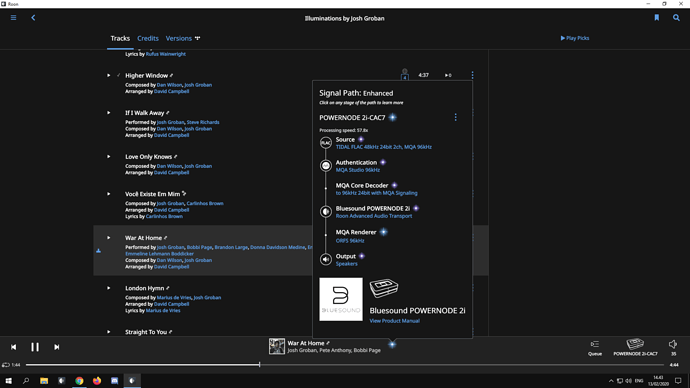 Question. Is there a way to get the MQA Renderer to say lossless? Or will it always be “enhanced”.

Im new to the Roon / MQA / Hifi world. Just trying to figure out why the MQA Renderer isn’t purple? Does the blue mean that the overall quality is lower than if it was purple?

It says my Powernode 2i is MQA/Roon ready.

The only way to make this path lossless is to turn off MQA. Once Roon starts manipulating the bits, it goes from “lossless” to “enhanced”. Personally, I would not get caught up with what this means.
For example, when I turn on my convolution filter for roon correction, my path goes from lossless to enhanced. But the music sounds so much better with the room anomalies fixed.
I’m not going to say much about MQA, because it inevitably devolves into squabbles. But the original bits are being modified by the MQA decoder/renderer, so the path becomes enhanced.

Follow-up question. My Roon Core is on my PC. Which has Chord Mojo connected as DAC.

If Im streaming from the PC to the Powernode 2i, nothing audio wise from my PC affects the outcome right? It’s purely down to the AMP / DAC on the Powernode 2i + the speakers. Right?

That’s right. Each stream is independent of each other. You can have ‘enhanced’ in one stream and ‘lossless’ in another stream.
Is that what you mean?

Not quite. I mean. The DAC/amp/soundcards on my PC does not interfere with the sound when its streaming to the Powernode 2i right?

No, it should not. There is a switch to ‘exclusive mode’ that is available for USB connected devices. That is the ‘purest’ signal path for USB connections. You would use that for your Chord.
If the endpoint is via ethernet or wireless, exclusive mode isn’t an option but the stream does not go out via a soundcard. Different path there.

Does the fact that the music is being streamed wirelessly decrease the overall quality? Compared to if all the connections were cabled?

No. As long as you are not getting dropouts, the digital stream is the same as if it went through ethernet. Sometimes with very high resolution music there may not be enough wireless bandwidth, but then you’d get dropouts. The transmitted signal would still be clean.

Thanks for helping me out :d So many questions :d

You’re welcome!
There is certainly a lot to learn with Roon. The Community is here to help with that.

Is it “normal” that if I go from 80% volume to 20% via roon that my speakers can make a little crackling/static noise for a split second? I mean when I use my BlueOS app to control the Powernode 2i, nothing happens. But when I go from 80 -> 20 (or any other big jump in volume) via Roon, I get some kind of scratching sound for a split second.

I wouldn’t call it normal. I don’t currently use Roon’s volume control, but when I have I don’t think there was an audible effect. But if it only happens during extreme volume changes, I wouldn’t worry about it. It’s like Henny Youngman said, “Doctor, doctor it hurts when I do that.” Doctor says “then don’t do that!”

I agree with @David_Gibson, you should not hear audible clicks or pops when changing volume. I know there have been a number of people who have had issues with the new generation Bluesound devices. But I don’t know if this was an issue or not.
I have an older Bluesound Pulse and I don’t hear any pops or clicks. If this does bother you, open a separate post with the issues in the Support section of the forum. I’m just a Roon user like you, and can’t help much with the real technical stuff.