Simultaneous sound from computer and Airplay

What I want to achieve is what I have with iTunes - simultaneous playback of the same music from my Mac Mini in one room, plus via an Airplay device in another (I have both an Apple TV2 and Airport Express available)

I’ve read the documentation, played around a bit and so far have been unable to get anything to come out of the Airplay devices.

Is this possible? If so, how?

it is I have 2 airport express on my network and they work fine. have you activated the on the settings? the can be inked to run in sync

The Airport Express and AppleTv show up in settings. But I’ve seen no way to link them and have had, to date, no sound via Roon from each.

What should I be doing?

Someone must know how this works. Anyone?

Hey Michael, assuming that you Enabled them in settings, you should be able to select them in the lower right of the screen as the Output Device ( or Zone). It might say system output right now.

When you click on it, you will see your available devices (you might have to wake up your Apple TV). Similar output devices (ie AirPlay) will have a Group button next to them. Click Group and you should be able to select both your Apple TV and Airport.

For the moment, linking between different types of zones, or non-network zones, is not supported. Our forthcoming RoonSpeakers streaming protocol should allow for lots of flexibility to link playback between all kinds of different devices.

Yes, of course the devices have been enabled in settings. 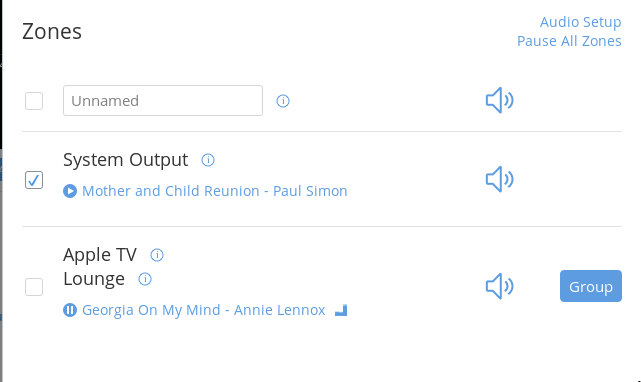 I can play music through my Mac Mini by selecting it first and hitting play. But then music doesn’t play through the AppleTV.

So the problem remains: how do I get the same music playing through both simultaneously? If it can be done, then how?

Hi Michael, sorry I misread your first post and I thought you were wanting to play through both the Apple TV and Airport express. As Mike indicated above, no, it won’t work directly from the Mac Mini and an Airplay device.

However, what is your system output from your Mac Mini? For example, are you connected to a dac into a stereo or just playing through connected speakers?

What I’m thinking is, are you able to get the Airport Express connected to your Mac Mini output. That way you could stream to both the Airport and Apple TV at the same time.

A description of how you listen to music directly from your Mac Mini would be helpful.

I have a Mac Mini in one room that has been the basis of my computer music system. I have used iTunes on it for years to supply music in that room and, via Airplay, to an Airport Express (early version) into the lounge.

My expectation was to replicate this with Roon replacing iTunes.

The Mac Mini is a late 2009 model with a Core2 processor. It runs Roon and, after a ram upgrade from 4MB to 8MB, is even pretty snappy with the software. The Mac Mini is running OS X 10.9.3. Audio from the Mac Mini is decoded by a Music Streamer + DAC, into a Plinius amplifier. The music files are stored on a USB hard drive attached to the Mac Mini.

Network connections between the Mac Mini and the AppleTV2 is via ethernet.

With the responses above I am now confused. Should I expect to be able to play music simultaneously through the Mac Mini and AppleTV?

Bottom line is no, replicating your old iTunes setup right now won’t work. You will have to wait until they release the upcoming Roon Speakers software. Not sure when that’s happening.

My thought was to add the Airport Express into your Mac Mini room setup. However, if the older Airport is not supported, then that won’t work. Also, you may not want to include an inferior sounding AirPlay device into your Mac Mini setup.

@mike could you make sure I’m correct with what I’m saying?

Yeah, you’re correct Greg, and thanks for checking.

Just for clarity’s sake, I’m reposting the following – keep in mind that playing via outputs directly connected to the Mac Mini would be local outputs, as opposed to network outputs which curently support grouping, like Airplay devices and Meridian zones, and devices running RoonSpeakers in the future.

For the moment, linking between different types of zones, or non-network zones, is not supported.

Moving on, @AudioEnz – can you point me to where you’re seeing this:

I don’t think we’ve done a lot of testing, but I vaguely recall someone getting this working recently by upgrading to the latest firmware. We don’t have one in our test lab, but if you have one handy I’d be interested to know how it goes.

Moving on, @AudioEnz – can you point me to where you’re seeing this:

I don’t think we’ve done a lot of testing, but I vaguely recall someone getting this working recently by upgrading to the latest firmware. We don’t have one in our test lab, but if you have one handy I’d be interested to know how it goes.
[/quote]

Any Airplay v2 devices on the same network with your Roon app - whether Apple or Third Party Airplay - will be recognized by Roon.

“Airplay v2” is not a phrase the is recognised in Apple’s documentation, as far as I can see. Nevertheless, I am unable to get Roon to play through an early Airport Express at all, whereas it will play through a later AppleTV2. Your recollection may be involving a very early AppleTV1 that was reported in these forums.

My work around for this is to purchase a second airport express and hook that up to your DAC and run it into your stereo that is currently coming off of your mac mini. It’s not exactly inexpensive but it should do the trick. You can bypass the DAC on the APE by connecting it to your current DAC.

Two years later and it seems this has not been solved. I have the same issue and luckily have an extra APE.

ON APE and DAC - https://www.cnet.com/news/using-apples-airport-express-with-a-dac-a-how-to-guide/