I am finding patterns in why I have so many “performer” and “production” credits for long-dead composers. This is coming from roon’s meta-data suppliers. I certainly never tagged to this level of detail. For example, if roon finds a:

(1) “Cadenza” credit then roon will categorise the composer as a performer
(2) “Revision”, “Liner Note” (probably because of a citation) “Original Material”, “Text” or “Orchestration” credit then even more worryingly the composer will be credited as an album producer.

This creates a lot of confusing clutter on various screens where you will see dead composers with long lists of “appearances” on albums and also long lists of “production” credits on albums. It creates unnecessary confusion on all searches on composers as you are often presented with multiple composer, performance, production options and it’s easy to click on the wrong thing.

These credits can be manually removed but is there not scope for roon to pre-process these credits more intelligently? More automation must be better. For example, “Original Material” seems to be used for the “theme” composer when the work is something like Variations on a Theme by Composer X by Composer Y. If I change the tag to “Composer” instead of “Original Material” then the production credit disappears. Similarly many composers extensively revised works over the years so if I remove the “Revision” tag then the production credit also dissapears.

Even more inconsistently I notice that contemporary performers that improvise their own cadenzas are credited as “Composers”. On the other hand when a performer uses the Composer’s suggested cadenza, that Composer is credited as a performer (even long dead ones). There must be a better way for “smart” handling of Composer performer and production credits.

Just to keep things in one place. 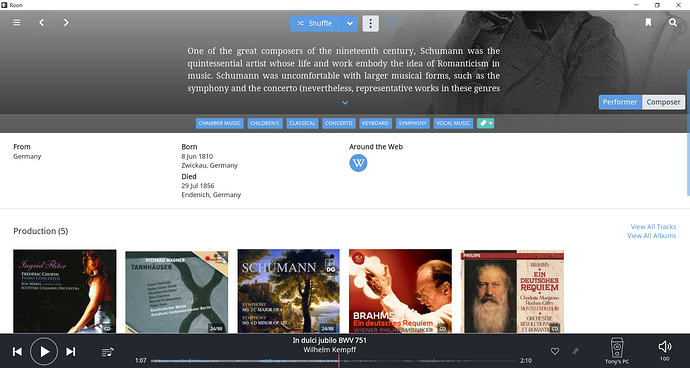 What is causing this is an album level credit of “Quotation Author”. So in the album booklet Schumann has been cited in relation to text on the other composers. If you don’t like these production credits then this one has to be deleted at an album rather than a track level

thanks for raising this topic. The cadenza thingie has bugged me for quite some time. It’s highly unlogical to me to not credit someone who wrote a cadenza as a composer. I never noticed that it is done the other way round with improvising artists…

Yes. These performer and production credits have been driving me nuts from the beginning. I’m only getting around to doing something about it now. Once I started removing these credits and could finally see what I was looking at I have found an even more bizarre one. It’s all over my library and no doubt all over yours as well. Roon will make production credits for dead composers on other dead composers albums.

I put it in the original post to keep things in one place.

Sometimes Composers will borrow, transcribe, annotate, and/or arrange compositions “composed” by other artists. I would hope the credits/tags would pick these up.

How’s about a specific example or two that you’ve encountered?

I would hope that is picked up by the meta-data suppliers as well. My objection is the way that it is being interpreted by roon. It seems to me to make more sense that an original theme composer gets a composer credit rather than a production credit.

I am wading through my library now and fixing things as I go along. This Brahms album is a good example: 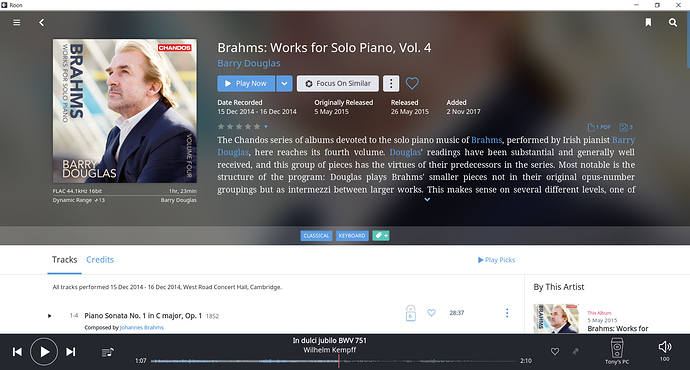 It has both the Schumann and the Paganini variations but they are treated inconsistently. In the Schumann variations, Schumann was originally credited as “Original Material” because it’s his theme. But in this context roon interprets Schumann as a “Producer” rather than a “Composer”, so I changed it: 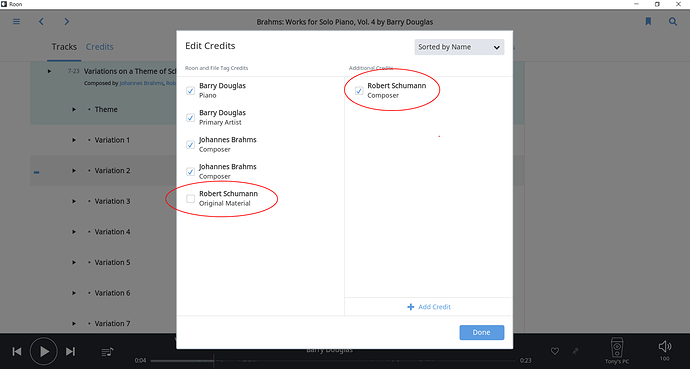 On the other hand with the Paganini variations roon does not credit Paganini either as “Original Material” or Composer and instead credits Brahms as the composer twice. So not a lot of consistency there: 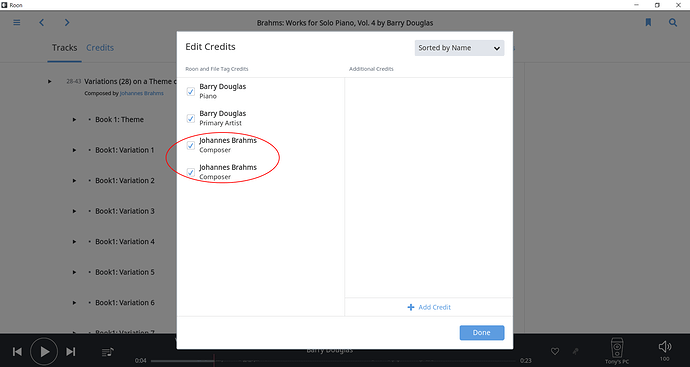 Yep, can’t argue. If you stumble upon it, whose label are the two albums you referenced?

Somewhere in the KB (Best Practices for Tagging) Roon shows which roles are treated as composer or production. It’s quite involved as I recall, but just simple mapping

Do you mean the Barry Douglas album above? Its just one Brahms album not two. It’s a Chandos album.

Well, there you have the answer in the role mappings. 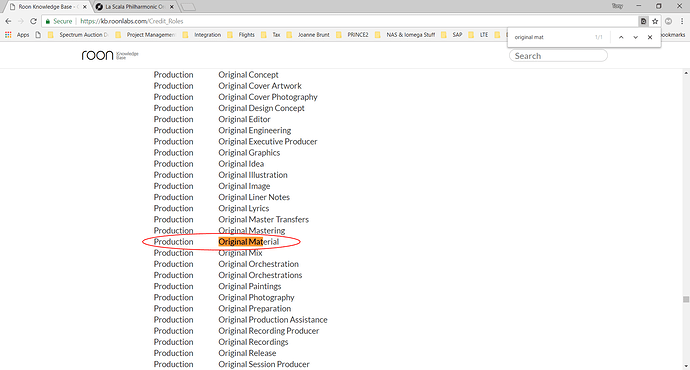 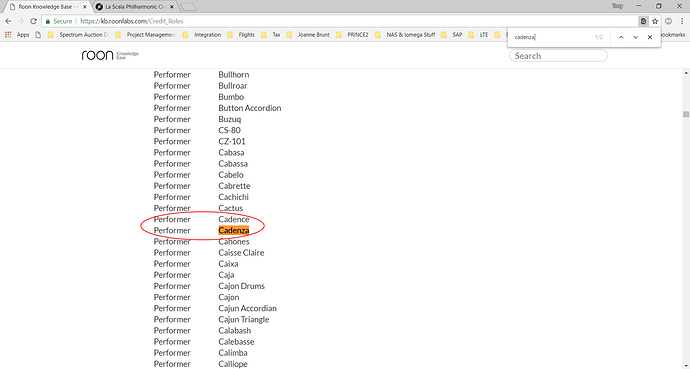 I think there is a lot of scope for revisiting the mapping of several of these production and performer roles when associating with composers. It never made any sense to me that most dead composers have such extensive performer and production credits.

by the way - what makes things much worse is that you can only correct it by editing it on track level, so identifying and correcting the occurence of a cadenza credit in a big box-set is a nightmare…

Yes, it varies. Some of these are set at a track and some at an album level. There must be scope to automate the pre-processing rules. I’m not even sure I understand why roon is mapping certain roles the way it does in the first place anyway.

But after a suggestion by @John_V it should be possible to batch process your cadenzas on box sets. If you go to the composer page and scroll down until you find the production credits you don’t want you can click on “tracks” or “albums” and get rid of the production roles you want as a batch. You will probably find you have to do it at both a track and an album level. It is all hit and miss of course but another common credit I find being handled as production rather than composer is is “Orchestration” or “Arranger”. So famous examples are:

In my case my remaining production credits for Debussy looks like this (including a small box set): 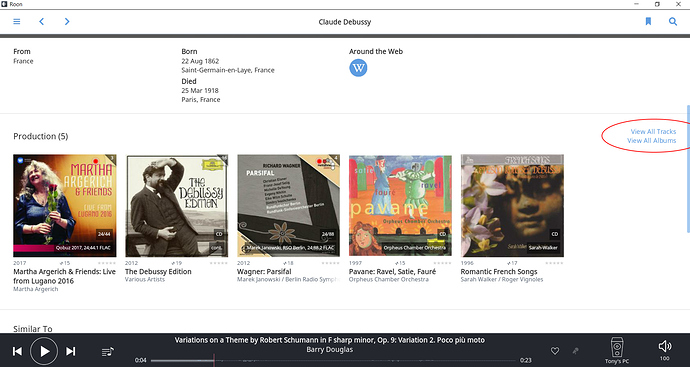 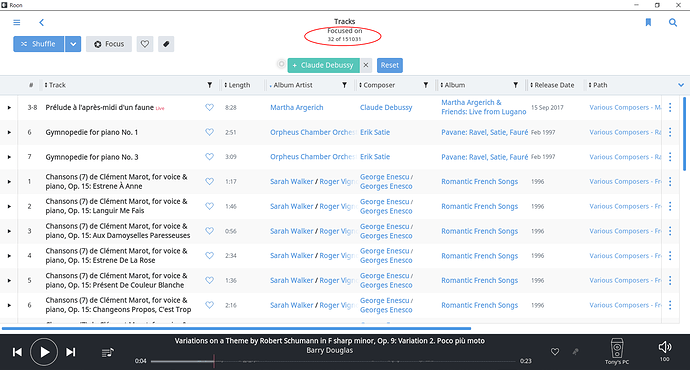 I can select all these tracks and “edit” them to blitz them all in one go. As it happens I am not brave enough so I just do the albums one by one to at least make sure there is a remaining “Composer” tag. As it happens also I need to also do this at the album level to get rid of the Debussy “Quotation Author” production credit on the Wagner album: 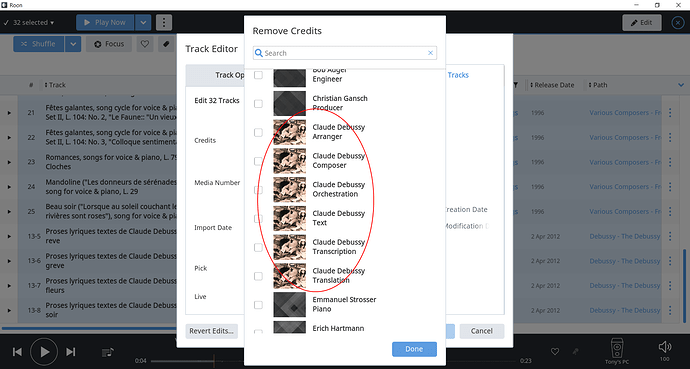 It would be much better if roon could find a way of automating all this in a pre-processor, rather than it being done as a post-processing manual operation.

This is an extremely common problem. Another famous example is Mussorgsky orchestrated by Ravel (Pictures at an exhibition). Core albums of the repertoire like Karajan’s Deutsche Grammophon Bolero give Ravel an “Orchestration” credit for Pictures at an exhibition rather than an “Orchestrator” credit. It means Ravel does not appear as a composer and it messes up quite rudimentary searches returning unexpected results:

I need to do this for that composition to fix this 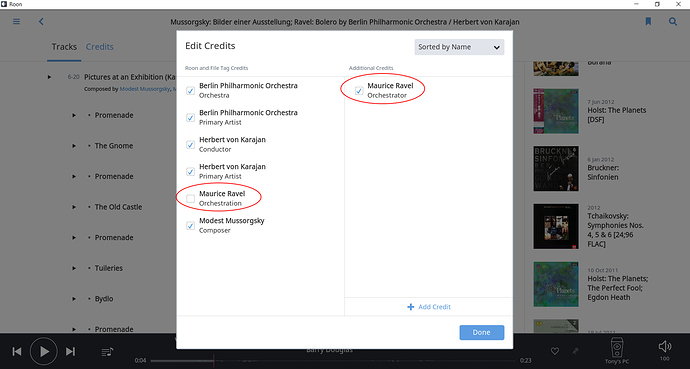 Is there a way of searching for these composer production and performer roles? I’m just randomly stumbling around at the moment.

Tony, you may be randomly stumbling around, but you are casting useful light into some hitherto unexplored corners. Thank you for that. You are also proving the adage “garbage in, garbage out”. The state of the metadata from Roon’s suppliers leaves much to be desired, particularly for classical music.

I think “garbage in garbage out” betrays our age group in the IT industry. A new roon generation should be thinking “garbage in, reengineered, eco friendly, low carbon footprint recyclables out” :-).

Here is another example. On this album, a very famous violinist from the 19th century gets a composer credit as “Arranger” for Mozart’s 4th Violin concerto: 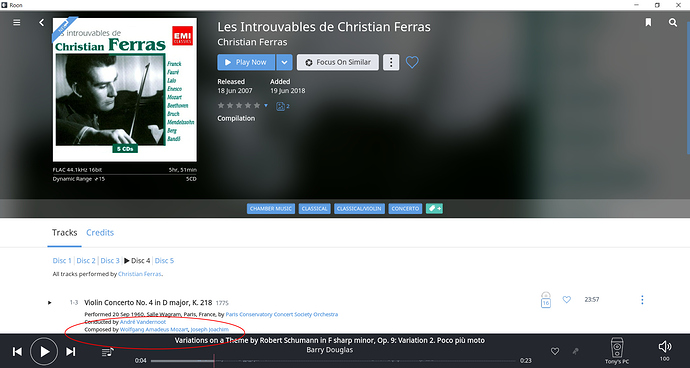 Of course Joachim was nothing of the sort. What he did was he wrote a series of widely used Cadenzas for the concert stage. But there are many, many others both from Mozart himself, long dead performers and newer contemporary ones. Here is a discussion by professional violinists about the Cadenza options:

So what Joachim should get is a “Cadenza” credit. Not an “Arranger” credit. The problem is that as @Klaus_Kammerer1 has been pointing out for a long time roon maps a “Cadenza” role to performer when it would make much more sense to map it to composer. Although roon sensibly maps “Arranger” to composer this is a very misleading interpretation of Joacim’s role in this case. 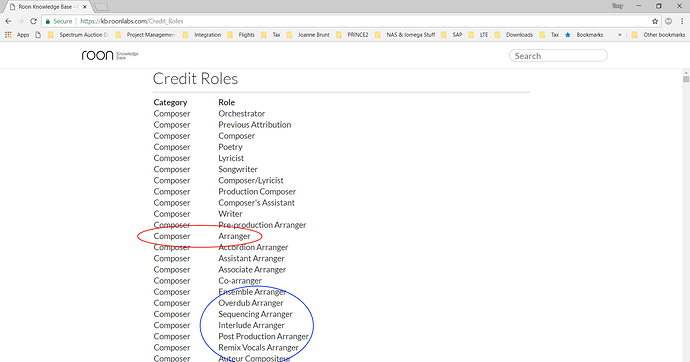 It is also clear from the long list of arranger sub-roles that many of them should in fact be mapped as production roles. Some of them pretty obvious like “Sequencing Arranger”. On the other hand something related to creative content like a Candenza writer gets a performer credit: 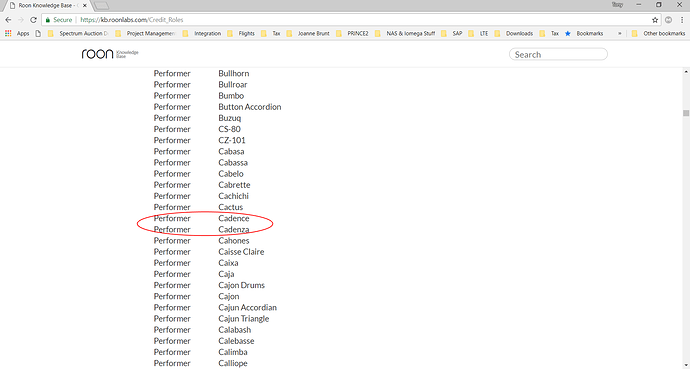 I don’t want this all to come across as librarian nit-picking. Personally I have almost no interest in tagging or navigation or attempts to force roon’s object model to behave more like legacy string parsing list managers. In an ideal world I would never touch a tagger again. What I do think is important is to improve the behind the scenes automation to straighten out this mess otherwise I just cannot imagine how the associations needed by much more highly automated radio and discovery that I am interested in are ever going to work.

It is of course an issue that the meta-data suppliers do not have their house in order. But there seems to be scope for the automated application of more sensible role mapping that would result in a much more enhanced roon experience for everyone, not just the classical enthusiasts.

Geoff, I don’t suppose you know where the roon “roles” list originated or what the reasoning is for the mappings?

It is pretty obvious that many of the mappings don’t make a lot of sense or are just plain inconsistent. I don’t want my roon cluttered with unnecessary production and performer credits. But I don’t particularly want to delete my “Original Material” and “Cadenza” credits. It is useful informatin. Better would be for roon to map them to Composer rather than Production or Performer.

It is not just the illogicality of the composer mappings. For example, I have not been able to get radio working when I seed with choral music. roon quickly goes off at a tangent when I know I have a lot of choral music. But I now see that a Vocal Ensemble is categorised as an “Ensemble” along with various types of Orchestras and Rock and Jazz Bands. On the other hand a Choir or a Chorus is categorised as a “Performer” along with lots of other soloists. It doesn’t make any sense.

Someone at roon really should take a closer look. There is a lot of scope here to improve things. I have absolutely no idea how roon works but these odd and inconsistent associations seem to be effecting search and navigation. I hope these associations are not being used in other parts of roon. Driving radio picks for example.

Tony, sorry, I’m just a Roon user, I’m not privy to the design processes and internal discussions of the Roon Labs developers and architects. They will be reading these Feature Requests, and don’t generally respond directly; but we can always invite someone such as @mike to comment if he wishes…

Ok, understood. My main concern is if there were knock on effects with radio. Not really working for me.