My Time Capsule was getting old and full – and since the missus relies on it for her Time Machine backups, I set out to get a replacement – only to find myself buying a Synology DS718+ with 2 WD Red NAS drives.

Having owned a QNAP TC-469L a few years ago and thoroughly disliking everything about it (the noise, the half-baked software, the slowness of just about everything) I was a bit hesitant, but the Synology DSM software turned out to be quite nice and speedy.

Setting up a RAID1 and enabling Time Machine (over SMB, forgoing AFP) was easy enough, as was setting up a backup routine for the Data share of my ROCK NUC. Plugged in an external drive for NAS backups, a portable harddrive for a quick sync of my music files for taking them on the road and activated a cloud sync of all NAS data to a Backblaze B2 bucket. Plugged in a spare 4GB RAM module I had lying around and created a handful of Linux VM’s to mess around with.

All set in no time for under €600 – and I probably should have left it at that. But of course I could not contain the itch and just had to install @crieke’s Roon Server SPK. Picked up an M.2 SDD external case, put in an old WD 120GB M.2 SDD for Roon’s database and installed the SPK, fearing the worst.

It actually turned out to be quite nice, with very little difference to the ROCK install on a NUC6i5 (16GB/128GB NVME). Complex views like Discovery and the Focus bar are marginally slower, but very acceptable. Connection times from iOS devices are the same (fractions of a second), as are other page renderings. I’m sure big processes like Background Audio Analysis will be slower as well (I did not notice \it since I restored a backup), but hey – they are background processes.

I have to say that I am a very average (but active ;-)) Roon user (library of ~30K tracks, 3 active zones) and do my DSP (Dirac Room Correction) outside of Roon – but here I am, running Roon Server on a NAS. I can whip up a Debian server doing all of the above in under an hour (blindfolded if I have to), but having it all on one clean, easy to manage box is actually a nice experience.

I really should feel dirty, but I guess I don’t. 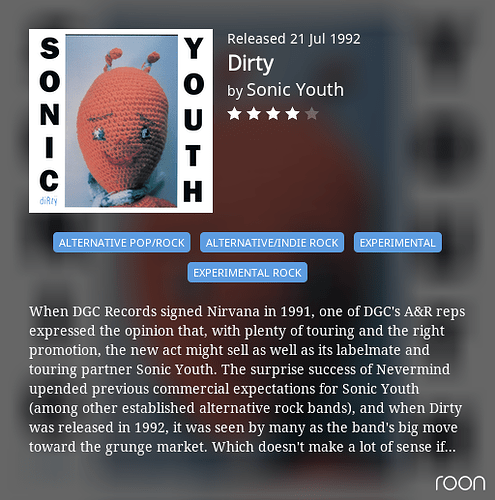 The dark side gets its power through temptation…

I expect to see the title of this thread changed in the near future, something like “So…I bought a NAS, realised it was a huge mistake and sold it”. Heh heh

The dark side gets its power through temptation…

I’ve been following your new simplicity philosophy with great interest, but I’m afraid I’ve had an adverse reaction to it: I’ve been pruning quite a few single purpose devices from my life. I like the architectual clarity of this solution: easily accessible data that’s local to Roon Core, local backup with versioning, syncing backup to the cloud.

Softwarewise, Synology appears to have come a long way over the last few years. I wouldn’t mind if a model like this would become available with an i3 at nominal cost, but for now it does just fine. It’s currently running three Roon Cores simultaneously: one native via SPK, one as a Docker install and one in a Debian VM – and it still does not break a sweat…

I choose my thread titles wisely.

When I first looked at Roon it was my intention to build the system with a NAS but I eventually went down the MOCK route, so all joking aside I am very interested in your long term experience with it.

I feel in a very similar vein to Anders, I like simplicity and once I have set things up I don’t want to have to keep playing (although I did have fun with setting wireless up with my USBridge), for me I value the time I spend with my son, listening to music or riding bikes. I would purchase a Nucleus if I could afford one here in Australia.

I used a Synology DS918+ last year with Roon Server and it worked great. The Intel Celeron was even able to able to DSD256 without affecting Roon browsing performance.

I posted the same advice last year but if somebody already had intentions of buying a NAS for backup purposes (or other NAS features), there’s nothing to lose in running Roon on it until a future Roon update maybe one day limits it’s performance. Then you can just add a ROCK or Nucleus later if needed. In this case, if you can run Roon Server without any issues with it’s performance, you can save your money on ROCK or Nucleus until running Roon Server on the NAS becomes annoyingly slow/painful.

But because of this risk of a future Roon update perhaps one day causing the lower powered Roon Cores to really struggle (even with no DSP) I wouldn’t recommend someone go spend money on a NAS just for the convenience that it can run Roon Server. It makes more sense (to me) to do this if you really want the other NAS features.

I’ve recently changed how I use my DS918+ though. I added a dedicated ROCK for Roon. My NAS is now offline (unplugged from the wall) most of the time and powered up approx. fortnightly to add new files. While it’s booted up I also run data scrubbing and extended SMART scans on the drives. I usually also backup to other external USB drives too. But for ~ 12/14 days each fortnight my NAS is unplugged for the wall. I also keep a couple of offline USB drive backups too now.

There were a couple of things that turned me off from Backblaze and other solutions (not cost) but I will keep an eye on developments in cloud backup/storage. I would LOVE to do away with the NAS and USB drive backups completely one day but for now it stays. I’m guessing a solution will come up in the next year or two to allow me to transition.

Right now I just hang a USB hard drive off my ROCK for music storage.

While I had no issues with browsing speed with my NAS as Roon Server, I do notice a significant step up in browsing performance with ROCK with my new NUC7i7DNHE. It’s blistering fast. Now that I’ve experienced this difference, I don’t think I could go back to running Roon Server on my NAS.

Just to share another data point. But no question in my experience (not any expertise), the NAS running Roon Server can be absolutely fine right now.

All good advice – but in the mean time the little NAS that could has been swift and stable and is offering loads of fun. I added a little ROCK to the mix as well: 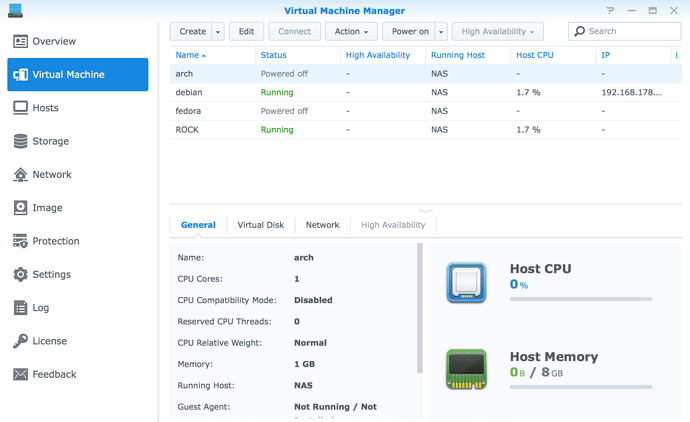 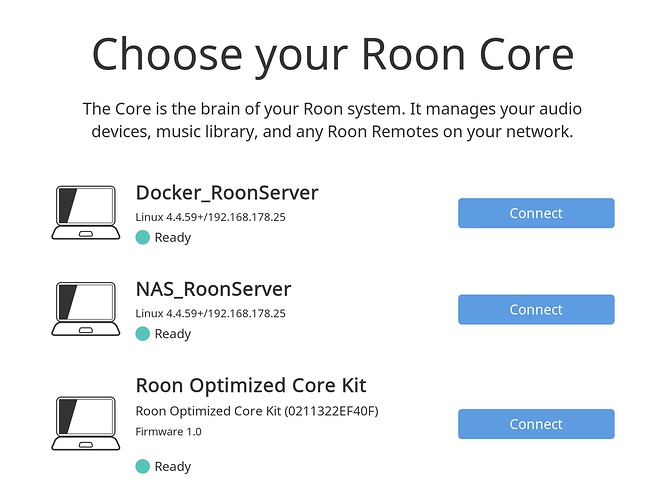 Three Cores running simultaneously: bare metal SPK, Docker and VM. They play simultaneously as well, without as much as a hiccup.

Note that this is probably the worst way ever to deploy ROCK: in an inefficient VM on an underpowered NAS.

The upsampling thing surprised me a bit: I am toying with a loaner Mojo this weekend: 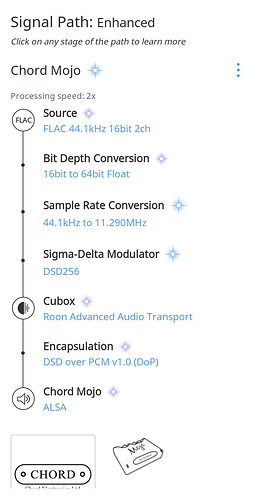 Still don’t like how it sounds though – but hey: it works.

Still don’t like how it sounds though – but hey: it works.

You probably already know but for any others, the Mojo (and all others but Dave) will convert (decimate) DSD to PCM.

DSD up-sampling to Chord DACs is usually not technically the best idea (Rob’s own advice) but still doesn’t stop people doing and enjoying it.

Yeah, I know (owned a Mojo before). Still sounds its best to me without any upsampling, DSD or PCM.

I keep trying to find a reason to get Roon off my NAS and slap ROCK on a spanking new NUC, but I come up empty-handed every time.

Maybe it’s time for a new hobby. How much is a decent fishing rod these days?

Yeah, I know (owned a Mojo before). Still sounds its best to me without any upsampling, DSD or PCM.

Many Chord owners aren’t aware of what happens to DSD with Chord DACs so just thought I’d mention for others.

I keep trying to find a reason to get Roon off my NAS and slap ROCK on a spanking new NUC, but I come up empty-handed every time.

Not at all surprised, per my post just above yours. A year from now things may (or not) but different if Roon Core becomes more resources demanding.