Just wondering if this is the i2s connection to the RPi or some other interface?

Yes, it is the i2s connection to the RPi. 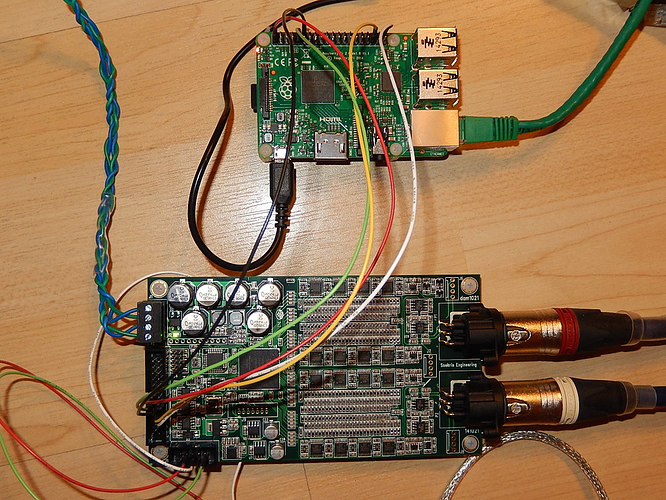 We do not support this card currently in DietPi, although it may work with manual configuration (of which I have no idea at this time

Same as above. I believe the Allo Sparky kernel only supports their DAC’s natively, however, it may work with manual configuration.

Here is a link to the Ian’s stuff…will post progress when I am brave enough to give it a whirl.

board quality is top notch and no drivers required.

let me know what you think…I think it should work with DietPi and RoPieee too.

Thanks that’s look interesting… DoP has a slight overhead processing; that it needs ‘pack’ into PCM frames at the PC side and then ‘unpack’ at the DAC side. I’m still waiting for ROCK to be patched so it can support native DSD. With that I can do a full DSD512 up sampling, I think it is worth the wait…

Well I have managed to get up sampling to work at 24/129 into the Soekris DAM 1021 I2S inputs from the RPi but DSD is not happy…I get a bit of audio but its like under a constant noise.

Anyone have any ideas? I tried with DietPi and RoPieee and I only get option for DSD64 - anyone had any luck with more than that for I2S? @spockfish @Dan_Knight what should be supported in the Roon settings for I2S DAC setups? 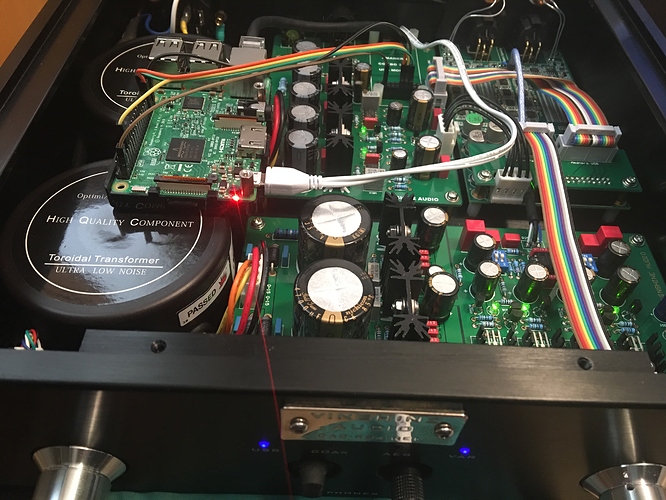 I have no luck with the Soekris on the Pi. You take 3.3 V from the Pi, and ground and data, LRCK and BCLK, right? I have set I2S in Dietpi to the Soekris. The Soekris works fine with USB 2 I2S.
Anything I have missed?

I was confused that the light is blinking until it plays something. A consequence of Stretch?

I think I will have another shot at this when I get some time…Maybe @spockfish has some updates that will help things along or maybe @Dan_Knight has something too.

I’m setting up a Sparky Network Streamer with Dietpi & Roon Bridge connected to Ian Canadas McFifo & Mc DualXO isolator & reclocker Boards and then to a HDMI LVDS Module to output I2S to my PS Audio Junior DAC. The USB output works but can’t get the I2S chain to work yet.

Can you tell me how you got the I2S out from your SBC to work in dietpi and to recognize your HATs?

I am not sure I can help you, unfortunately. I have not tried any of the equipment you are using. My setup is a Pi 2 and Soekris. I am now using Ropiee, simply connecting the RPI like the picture from Wizardofoz above. In Ropiee the I2S driver is named Raspberry. It works flawlessly up to 192. But Dietpi worked well too.

Thanks Henry. I’m still looking how to get I2S working with my McFifo HAT.

Hi @wizardofoz
I’m curious if you got Ian’s boards to work with DietPi?

I’m setting up a Sparky Network Streamer with Dietpi & Roon Bridge connected to Ian Canadas McFifo & Mc DualXO isolator & reclocker Boards and then to a HDMI LVDS Module to output I2S to my PS Audio Junior DAC. The USB output from my sparky works but can’t get the I2S chain to work yet.

If you got yours to work could you tell me what settings you used in dietpi.

Patrick I haven’t had another shot at it yet and never managed to get as far as trying with Ian’s boards as the i2s off of the pi alone for DSD seemed to be a stumbling block for me. I am not sure if the Sparky can be used with Ian’s board. IIRC something to with master and slave issues…but I might well be mistaken

Thx @wizardofoz
I have learnt from dietpi support that my dietpi settings and connections are good so I’m working on the assumption that the problem lies with the HDMI module connections.

Do you know if I might have better luck with an RPI?

@Patrick_Bryson well a RPi is not too expensive to play with - my sparky is on a back burner as its part of a VOLT+ setup that the Kali and Piano 2 boards appear to have failed.

I was trying to drive the DAM 1021 direct via its I2S inputs so cant comment on any HDMI style connections.

Keep us posted on progress tho

@wizardofoz
I might try a RPI but technically it shouldn’t be different from the sparky. I was going to try the Kali too but decided on Ian’s boards as they are highly regarded. I’m not Concerned with DSD so hopefully I can get all this to play soon.

I have contacted Audio g-d to see if they will supply me with a HDMI module with UFL input connectors as I’m going on the assumption that the problem is with my diy connecting of it to the McDualXO.

I found out the LT3045 3.3v regulator powering my HDMI module was faulty. Have ordered a couple of new ones from Alexey at LDVOR. Also Audio g-d said they would be able to supply me with a customised HDMI module…

Been a while … has anyone made any progress with RPi and dam1021 yet with or without Ian’s DoP-dsd options.

I had a bit of an electrical disaster frying my dam output opamps and buffer resistors. I tried repairing but didn’t quite get it right…this was in a custom dac setup by Vinshine audio. So I bought a new dam board and put it in…still not working then I found another issue and fixed it so now I have a spare dam board, that I think is repaired…thinking to maybe resurrect this RPi to I2S to dam again.

@Patrick_Bryson so any progress Patrick? I haven’t gathered enough time to retry mine yet, but I am tinkering with the idea to use a RPi as it has better ethernet support, tho if I use i2s probably dont need to worry as the USB will be unused.

@Henry_Larsen did you manage to get DSD working yet Henry?

@Artur did you get Ian’s module?