Goodmorning everyone!
I would like to ask you for help:

Can I ask you if there is a software that does “clean up/organize” in my folder by placing all my albums in this order? :

Mp3tag does file and folders based on metadata. As an example

Converters to rename files or to import tags

Mp3tag provides a variety of possibilities to get tag information from parts of the filename or rename files based on the information stored in the tag of a file. The base concept behind all converters in Mp3tag is the so called format string, which...

Yate will do this as well. Mac only. https://2manyrobots.com/yate/

If you are using Roon, organizing your folders by genre won’t do anything in Roon. I have a folder for lossy and one for lossless. Then I organize by artist/album…and that is overkill for Roon yet is enough for me to be able to locate what I need to locate.

What are you doing that requires you to organize by genre?

Hello,
I would like to have my directory divided as follows:

Also beware of pop/rock which seems to be the “I have no idea so I’ll tag it with that” genre of choice.

I am using MusicBrainz Picard. I like the way it organizes the albums together and the ease of use.

But as winders says. You can organize as much as you want, roon does not need it and you might up spending a lot of time organizing, without direct benefit in roon. Although for your own organization it might be worth the effort.

From my own experience. In the past I spent a lot of time organizing folders. Had all kinds of scripts, etc… now with roon, I just organize by artist and album, to have some structure, thats it.

Oh. This has nothing to do with Roon. This is about changing the organization of your files outside of Roon.

exactly like that!
Roon works very, very well, but my directory is chaos

Okay. Why do you want something different than to organize by artist and album? What are you doing that requires more granularity? Are you using other players besides Roon? I am just curious…

on my nuc (with ubuntu) I have a 4tb external drive dedicated only to music. Inside the hard disk I have a folder with “Lossless” where I put all my CDs in flac and all the music I bought.

The problem is that there is too much chaos: currently I have divided the folders exactly like this:

and inside they are divided by Artists.

Until now it works, but every time I buy or make a backup of my CDs, I get mad at where to put the music.
I was hoping there was a software that did this automatically, in the sense I put new music in a folder and he automatically (according to my tags) moves it to the correct folder.

As I said previously, I have two folders that Roon watches. One for losses files and the other for lossy files. Here is an image of what I have: 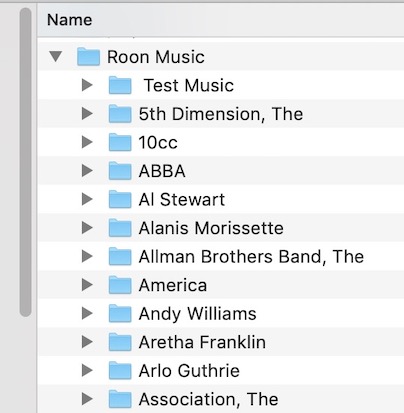 It’s simple to navigate and there is little question where to put stuff. Classical requires a bit more thought but it’s not hard to do. This is much easier than trying to break it down by genre too.

I used to use folders based on genre / artist but found that, in too many cases, artists spanned genres.

So I switched to the structure below. Creating subfolders based on artists names in alphabetical groupings makes it easier to manage (I have a large collection with nearly 1,800 artists). I find that naming Artist folders with Surname, Forename where appropriate (it doesn’t work for groups - but for those starting with The I treat this as a forename so Beatles go under B as Beatles, The).

I find this much easier to manage - fon’t have to remember, for example, which genre I originally put Neil Young in! 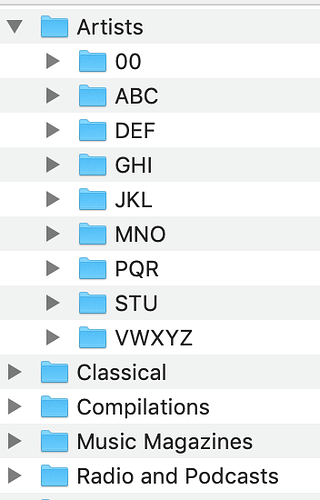