Some "hi-res" albums play only at 16/44 - regional restriction or metadata error?

I recently subscribed to Qobuz and most hi-res content plays at hi-res. Occasionally, I will come across something like this, where the album view reports the title as hi-res (in this case 24/96), but during playback the signal path reports 16/44.

Anyone know if this is a licensing issue and in my location Qobuz don’t have the hi-res streaming rights, or is this a metadata issue somewhere? 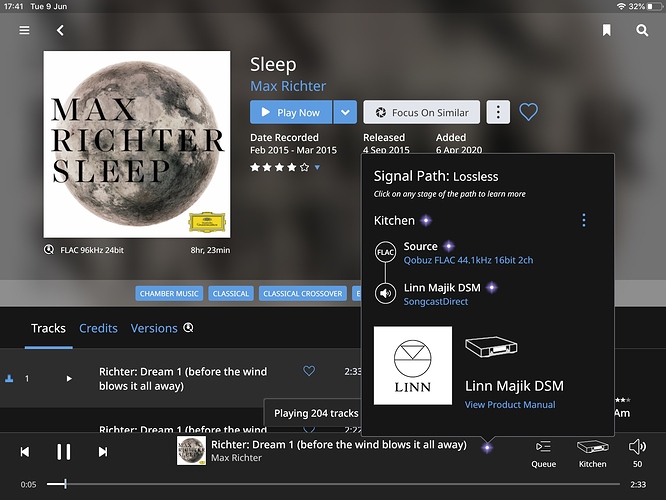 answering my own question to an extent, I see the Qobuz app on my iPad also reports the album as hi-res, while my Linn app plays the album in CD quality, so I guess when we see a hi-res badge on a Qobuz album, it just means that in at least one country, it’s provided in that resolution, just not necessarily where the subscriber happens to live.

I took a quick look at this and it also plays at 16/44 in Qobuz’s own apps. Seems to be a labelling problem which I have raised with Qobuz.

There’s an mqa version on Tidal…

I took a quick look at this and it also plays at 16/44 in Qobuz’s own apps. Seems to be a labelling problem which I have raised with Qobuz.

thanks. I may have come across some other albums on Qobuz badged as “hi-res” that do not stream in hi-res, at least here in the UK. I was rather more annoyed when I added the Jackie Brown soundtrack to my Qobuz collection, only to find that all but one of the tracks on the album are “unavailable”. I ran a Tidal trial for a few months and can’t recall encountering this, maybe I was just lucky. Or maybe Tidal are better at making their content available at the level it’s advertised at.

In the end the recent Qobuz price reduction won me over, given that MQA had no wow factor for me.

You do come across the Unavailable issue on Tidal and sometimes it’s just one track on an album, sometimes many more. I think this is a thing in the streaming world and if the music is that important to one, you have to buy it.

I’ve seen a bunch of albums in the past that were marked as hires and eventually got corrected with the correct rate. When I asked Qobuz about them at the time they claimed didn’t have the hires streaming rights but could sell at that rate.

Just looked at the qobuz website, not obvious to me how customers report issues of this nature to them?

They’re active in this forum:

Qobuz catalog is the highest resolution for sale in their download store. Not all of those titles are available to stream at that resolution.

So… Roon gets the catalog and says resolution X. You hit play. Qobuz feeds you the resolution they are licensed to stream at.

I believe this is the root of what you’re seeing. Probably could be fixed if Qobuz would send over the right data to Roon.

Qobuz catalog is the highest resolution for sale in their download store. Not all of those titles are available to stream at that resolution.

This is true, but normally it does say “download only” or words to that effect.

So… Roon gets the catalog and says resolution X. You hit play. Qobuz feeds you the resolution they are licensed to stream at

This is good to know. Appreciate the correction. I find this happens a lot more than I would expect (happens so often I don’t trust the resolution of anything I play in Qobuz until it’s actually playing). Should we be reporting this when it happens? To Roon or Qobuz?

Agree, it is useful to know that Roon is displaying the Qobuz-declared streaming resolution, in which case a standard reporting mechanism for flagging discrepancies with the actual playback resolution would be helpful.

And I agree with @ipeverywhere , these discrepancies are not rare, eg Springsteen on Broadway is advertised as 24/48 but plays at 16/44.