Sondheim's Sweeney Todd - What a Carve-up!

I have two versions of the original Broadway Cast production of Sondheim’s Sweeney Todd: a 1CD “Highlights” version, and a 2CD version with all the musical numbers included.

Things start to go awry in Roon when I look at the track listings for the “Highlights” album. Here’s a screenshot showing Roon on the left, overlaid with File Explorer showing the album folder tracks on the right. 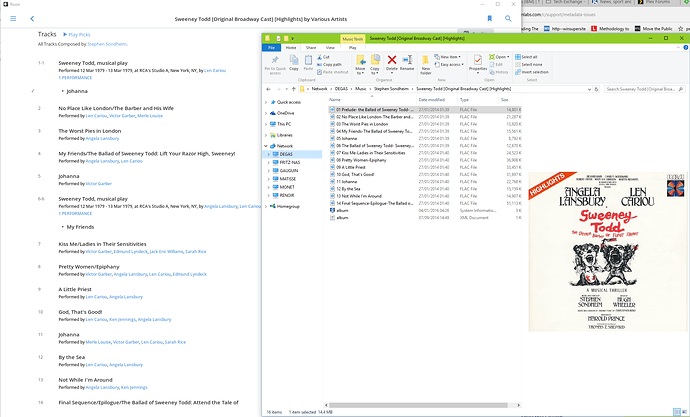 I don’t understand why:
a) the first and sixth tracks are marked as 1-1 and 6-6 respectively, and both given a running time of 1:26:17
b) Why there are extra “Johanna” and “My Friends” tracks shoved in, and in the wrong place.

It’s a similar story for the 2CD version. “Johanna” has got shoved in again in the wrong place, and the grouping of tracks is not correct. 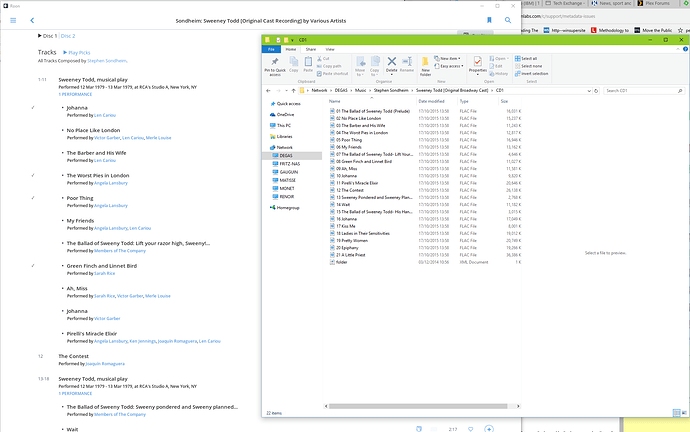 As far as I can see, both albums have been ripped into the correct folder structure and with the correct ID3v2 tags. They display correctly with other Music players, but Roon seems to have ideas of its own.

Another thing, it appears as though Roon is trying to group tracks into works, so if the work is Sweeney Tood, then I would expect all tracks to be listed as a sub-group (i.e. offset to the right with a leading bullet). But as you can see here (and in multiple other examples in my album collection) this automatic grouping goes disastrously wrong.

Is there any way of manually fixing this (and ideally feeding this back to Roon so that the metadata can be fixed at source for everybody)?