Track from tidal album appears as “unavailable” but I can access it via tidal. I can play the track on tidal on all devices/ interfaces but keeps showing “unavailable” in Roon. Tried to delete the album from the library: did not fix the problem. Tried to relaunch the Roon core, did not work either.

I’m wondering if the metadata between qobuz and tidal is mixing up roon. In the UK its available on tidal but not on qobuz, licensing no doubt.

Thanks. Some more information on this:

I have the same or similar issue on a different album, the final track on My love is cool by Wolf Alice.

It’s the 12 track version of the album, the 25 track version is OK. Both versions show up in tidal and both play in the tidal app.

Thank you for getting in touch about this. In researching your report it appears that neither of these tracks is licensed for streaming in your region. It could be that TIDAL has worked out exclusive licensing on their end but cannot do so when sharing with a third-party, such as Roon.

When I encounter albums in Roon that have unavailable tracks due to licensing I sometimes rebuild the album manually. 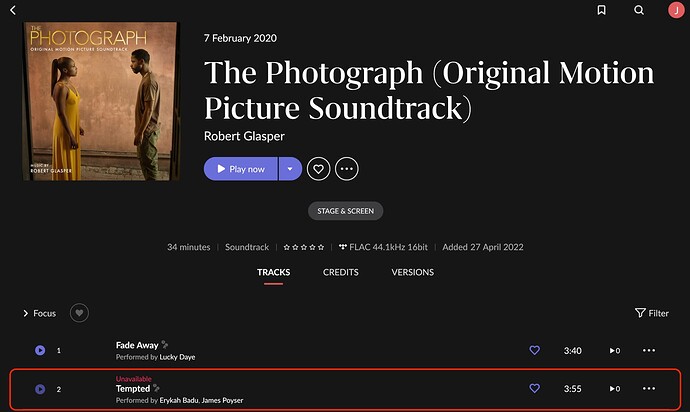 To do this for The Photograph:

I added The Photograph, then added the Tempted single by Erykah Badu to my library.

Then, on the albums page, I merge those two albums.

After doing so I remove the unwanted and unavailable tracks from the merged album.

I hide the local four-track version and I’m left with a complete version of The Photograph on TIDAL. 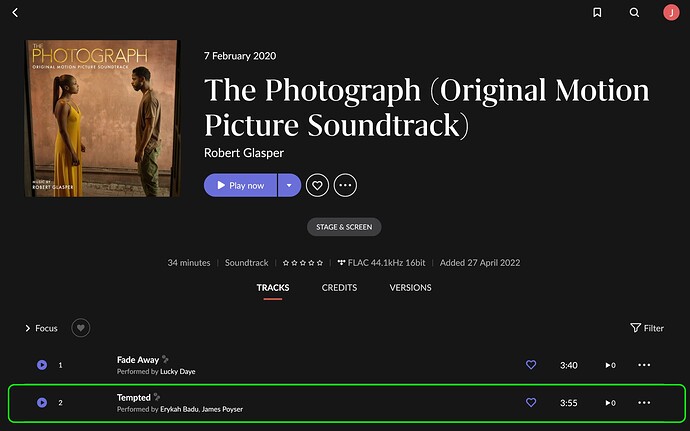 Admittedly, this may not be an ideal workaround in this particular case (as the single track in question seems to be available on TIDAL itself) but in some others where the album is missing several tracks, and those tracks are readily available elsewhere on TIDAL (various artist discs, compilations, etc) and you would REALLY like to have the album, in complete form, it can be a fun rewarding task, to me - others may feel differently.

Dear Jamie, Thanks for looking into this. I have now a better understanding of the complexity of the problem. I appreciate that you have been able to suggest a fix for the problem (even if rather inconvenient and convoluted). Having said this, Roon should try to fix this problem with Tidal. Clients that access Tidal via Roon should not be penalised. Roon is more expensive than Tidal. Tidal gives me an interface to listen to music but also gives me the content. Roon just gives me an interface. In this particular case, Roon interface makes harder to access the content that I have already paid for. This is rather unsatisfactory.

Roon should try to fix this problem with Tidal. Clients that access Tidal via Roon should not be penalised.

Other players with Tidal integrated also does not have the ability to play that track. For example, look at BluOS’s Tidal page for the same album:

Notice that BluOs, doesn’t even give you the indication that the “Tempted” track has been dropped except if you catch the numbering going from 1 to 3.