Andre are you streaming from Qobuz?

Though you’re bit depth is still getting reduced to 16bit the sample rate is now going to the Sonos maximum of 48KHz.
I have never seen that with Sonos and just tried a couple of 24/96 local album’s and streaming Tidal and it is as is was.

I am streaming from my Synology NAS.
I am not subscribed to Tidal nor Qobuz.( not available in Canada unfortunately).

Its very interesting that you get 48KHz as I cannot seem anything beside converting to 16bit 44.1 on my setup. Are you doing any DSP?

Or maybe you are just blessed

As far as I am aware I do not have any DSP ( I’m still need too Roon. So I’ll double check.

Usually when you see processing speed, that usually means some DSP engaged.
It could be volume leveling as that is a type of DSP

Regarding the stream play…I have no DSP.

I have SONOS:One as speakers 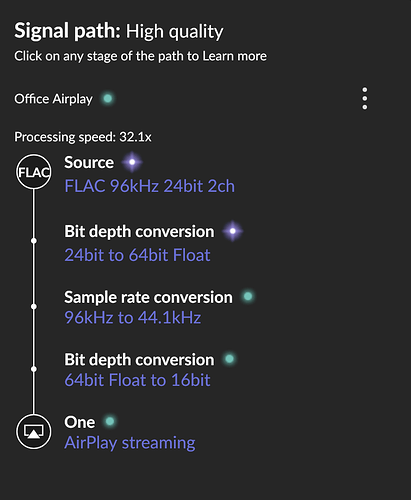 That’s exactly what I would expect to see from Airplay on a Sonos.

Here is what my Sonos signal path looks like playing a CD album on 2 Play 1s in a stereo pair with all DSP, headroom and audio leveling and cross fade turned off. 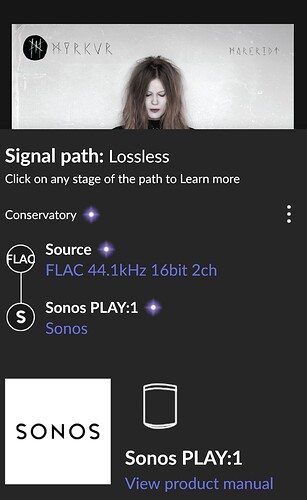 And the same thing with a high definition album 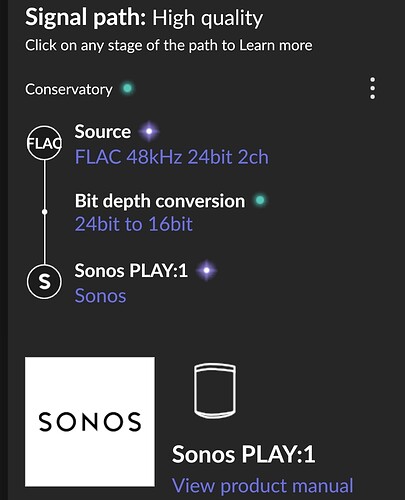 I do have problem with the streaming method though. Sometimes it skip to the next song while in the middle of the current song. rather annoying.

So I have found that when using cross fade and volume leveling. I leave both turned off now and rarely have any kind of skip.
I had so many when I had them both enabled, so worth trying it off.

Andre I have managed to reproduce this Now.
So I engaged DSP for sample rate conversation and then I get the same result as you 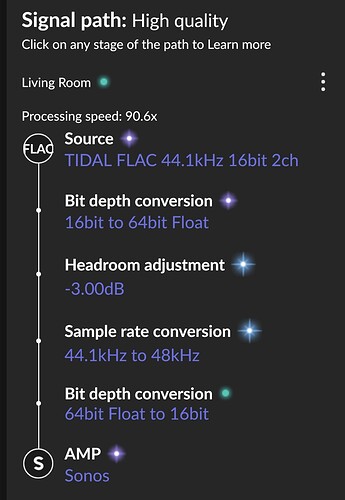 I use Sonos streaming from my core (laptop and roon Win10 desktop app) sounds great. I don’t have the acumen to engage with the above sound variables.

I did find this: Why "Roon Ready" or "Roon Tested"?

However, I am curious as to the differential between audio output channels’ “roon tested” and 'Other network devices"? I’d think Sonos would be roon tested by now. 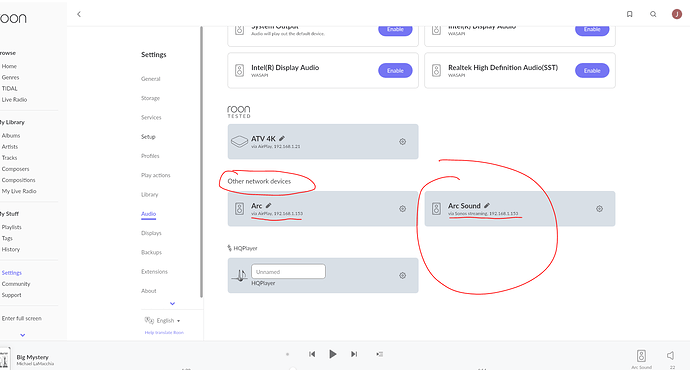 Well, using Sonos is most prob higher bitrate. But depending on Airplay 1 or 2 and some other stuff. However, one advantage when using Airplay 2 you can group S1 and S2 Sonos environments via iOS. You can also group any other Airplay speakers with your Sonos by using Airplay 2. + Do the groups via iOS. Once you did the groups, just use Roon as normal.

None of the new Sonos S2 devices have been officially tested only the original s1 stuff. It still works the same though. Tested status relies on the manufacturer to supply models to Roon to test. Obviously Sonos are not interested with S2 devices. My ARC shows up under other network devices works perfectly.

Thanks so much @Michael_Pauliks and @CrystalGipsy!

Hi Eike there is some confusion here. Normally you would be 100% correct with your statement.

But Roon is sending music via AirPlay in Roon’s case and not the iPhone, so like the Sonos protocol it goes from the roon Core to the Sonos speaker via the AirPlay protocol.

Hopefully this helps explain what happens.

I have both “Sonos Streaming” and “Airplay” set up with the Sonos Arc as the endpoint. Couple of things I noticed:

A strange one as they should be quite similar besides a slight upscale on the SonosNet.

What’s the reason you have cross-fade enabled, does that improve the soundstage for you? If you turn upscale and cross-fade off does that make them sound more similar?

I can’t hear the difference between the two, just noticed I wasn’t getting the icon for the higher quality with AirPlay. I have crossfade enabled to mix the end of one track into the beginning of the other. Toggling it on or off makes no difference. It’s off on one output because I was testing to see if it changed anything.

LOL, I opened this conversation in January because I was curious about Sonos vs. Airplay. Since asking that question, I was getting really terrible skipping and dropouts using Sonos. I switched to Airplay and now it works as expected. I’m taking comfort in the comments that there doesn’t seem to be a discernable difference in sound quality. Sounds good to me.

FWIW, I have two sets of Sonos speakers. The set in my study are wired and didn’t have the problem. The set in the kitchen use Wi-Fi and they had the problem with the Sonos protocol. I use a very current Wi-Fi 6E meshed router, so I don’t think Wi-Fi is a problem.