Sooloos C15 raging against the dying of the light

but like that Welsh genius, I fear its final days are here. I currently use a C15 with an MD600 for storage and an 818v3 into DSP8000s (along with some MS200s for other rooms) so want to change as little as possible. I also love the “always on” touch screen of the C15. I find that apps on an iPad are no substitute as there is inevitably a mix of (a) the iPad’s not charged, (b) it’s on the wrong app so I need to find the Meridian app © my daughter has pinched it to watch YouTube or (d) the app needs updating. Hence, I am looking for a simple replacement for the C15 which will continue to use the MD600 as the core but which is an always-on, dedicated touch-screen. I have used Roon for quite a while intermittently but have always stumbled on a full adoption because of need for an iPad or computer screen interface.

I am a Mac user so don’t want to have to dive into the Windows world of pick-and-mix server or NAS systems as life is too short to learn all that again with a different OS. Can anyone recommend something that gives me 2018 version of the C15 with Mac simplicity of use? Budget is (relatively) unlimited for the right solution but I would like something that is essentially fire-and-forget. Any recommendations gratefully accepted.

If you wish to retain the MD600 running the Sooloos Core, your options for a C15 replacment are limited to a
Meridian TouchPC application running on say a Windows all-in-one device with a 1080p touch screen.
Unfortunately there’s no “TouchMac” application.

If you are willing to let go of Sooloos and just run Roon (I did have not not looked back since) then you have more options … such as a setup like this:

Roon Nucleus (Can be viewed as a comodity device, comes preconfigure and auto updates. Nothing for the user to worry about.)
Apple iPad Pro 12.9" (iOS can be configured so it only runs the Roon App.)
iPad Pro screen stand (as an example, there are lots of designs available.)

If the iPad is still a problem for you, then consider using a Mac with a touch screen, running the Roon application (set the power management to never sleep, and have it just blank the screen).

I too am a Meridian lover! I have the same basic setup as you do, without the dsp8000’s. I tried to follow all of the Meridian heavyweights (like Carl and Russ and many more) to Roon but it did not work for me. After trying for months to get Roon core to recognize my Meridian endpoints, I just gave up. I LOVE Sooloos! After spending more money than a lifetime subscription and more time than I care to think about, I just want to listen to music and Sooloos ALWAYS works for me. May I suggest just buying your daughter her own Ipad? Enjoy the music

Thanks for the suggestions Carl - seems that the new iPad Pro has solved at least one of the issues (number 5 and counting) in that you can charge the iPad on a stand in a landscape format. I always thought that the portrait view is wrong for viewing music - the last vestiges of vinyl clinging on in how I like my metadata presented ;-)!

James - would love to carry on but the touch screen is dying and each input can take 3-5 seconds to respond. Before I know it, Faithless is playing at 95/100 and on the DSP8000 the neighbours tend to notice. As probably does the local geological society. Daughter has her own - she just finds the child restrictions a nuisance and so has done the obvious and gone for mine instead!

Faithless is playing at 95/100 and on the DSP8000 the neighbours tend to notice. As probably does the local geological society.

Brilliant. As another 8k user I know exactly what this sounds like too

In Roon you can set the min/max range for volume control. This is arguably one of THE best features ever added. 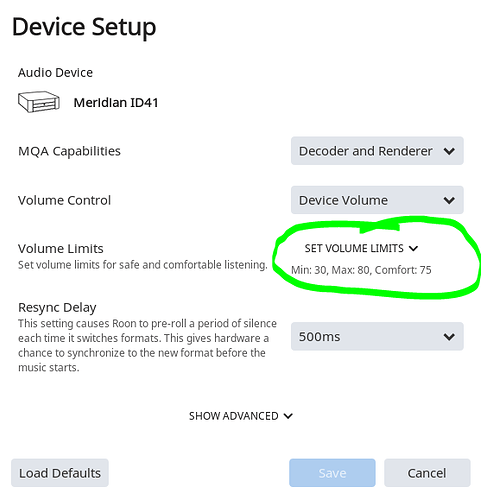