Sorting: My Titles Should Be Preferred by Default: Here's Why

I like Roon. It’s better for what I need than anything else I have ever found. And I have been looking for four years now. Why am I seeking an alternative? Well, the price, for one thing. Also, it’s unnecessarily technical, employing jargon that only audiophiles understand. The problem with this becomes apparent when I try to interest friends in the software. Most don’t know from “sampling” and bit rates. They are the MP3 generation. Oh some may have run across the term Hi Res but not much more than that…If we ever expect the truly dreadful but necessary venue, HD TRACKS to get some discipline and become user friendly, they have to have competition, and If we ever want to have “record stores” whether virtual or actual, that carry all of the music we love in High Resolution, it has to become popular and keeping a special jargon as the exclusive way of talking and thinking about the subject keeps us isolated. I say “us” but I am really not one of you I read the updates from the community dutifully but most of the time I have no clue what I am reading. I found Hi Resolution because I wanted better sound than MP3 for classical music. Now I need a music player that will provide a platform for organizing and displaying my 2f000 plus albums, and make it easy to find them when I want to listen, and one that will play all my files. That’s it. I Roon does that very well, and I love some of the features, especially the reviews and educational tools. Butt there are others that leave a lot to be desired. One of them is so asinine that more than once I have thrown things across the room in frustration.

I listen mostly to classical music. For that reason I prefer to organize my albums by title rather than by artist. This is the single greatest difference between “classical” music and everything else. With classical music the focus is almost always on the composer, then the work, then the artist. Roon, like everyone else follows the default procedure of favoring the artist, which, okay, I can life with because It is just one click to switch to my preferred sorting system. But I am not done yet. I often have multiple performances of the same work in m library. So it’s useful to me to see them all together. Which they would ge if my titles were preferred. I have other little quirks. If the pianist Paul Lewis releases most the keyboard works of Schubert, for example, on multiple bbx sets. I like to see them all together too. So I devised a system that would accomplish that. (“Schubert: Piano Works (Lewis 3)” for example) It doesn’t matter if you don’t like my system. Because the only thing it is for is helping me find the album I want when I want it. Problem is, Roon disregards my preferences and follows its own bizarre scheme. Thus, recently, I noticed that I could not find an album I knew I had. It was a recording of Mahler’s 9th Symphony played by the Vienna Philharmonic under Claudio Abbado. It wasn’t with all my other recordings of that work. I searched for it. Finally I found it. Under S. for Symphony. I also found there a whole page of other albums I would not have been able to find had I been looking for them. Worse, I lost a recording of Mozart’s C minor Mass which I was particularly fond of. I did not find it under M for Mozart, or Mass, or C for the key. I found it finally under W, for Wolfgang. Seriously. I began to browse my library. There was a Verdi opera under G for Giuseppe, This is just absurd. And it isn’t a small problem. I regularly have to search for albums I know I have but which are buried in obscurity because of the arbitrary album ID process Roon prefers over my own system. Plus even if I had the most prodigious memory, with over 2000 albums, I don’t expect that I will remember every performance of a . particular piece that I have ever bought in the last 40 years. So one improvement I would like to see is to have the Option of preferring mine across the board. Not just on in a single field in a page ull of metadata for a particular album. A software program as sophisticated as Roon is, and though I appear here today complaining about one thing, I am a dedicated Roonist, boners like this should embarrass it creators and curators. So that’s my screed. Here endeth the Lesson.

So one improvement I would like to see is to have the Option of preferring mine across the board. Not just on in a single field in a page ull of metadata for a particular album

You can do this in Settings/Library/Import Settings by changing Title to “Prefer File” in the Metadata preferences for Albums section: 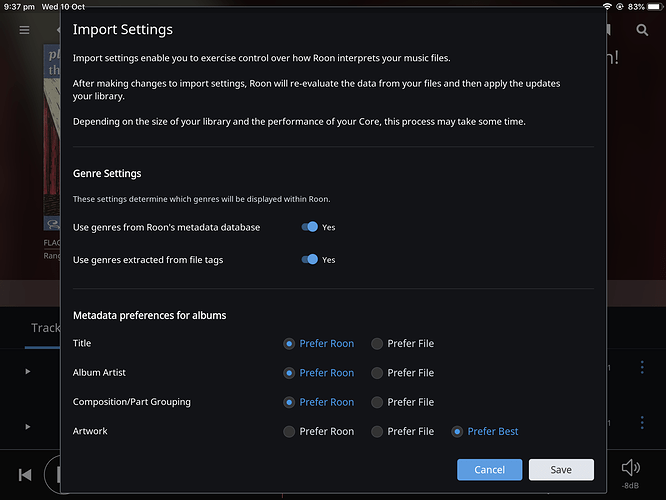 Thanks… I have been with Roon for 3 years now and that is the first I heard of this ssetting. I thought I could maybe do it album by album but I did not know I could change it in one fell swoop.

Import Settings was introduced in Roon 1.3 in February 2017, so it was amongst a lot of other changes.

You might also be interested in this KB page which provides more detail about File Tags and Roon.