Here’s a topic I don’t recall seeing here. It involves something I’ve noticed over my 50+ years of listening to music on my various systems. Some days everything sounds perfect, and yet maybe the next day with the same system, the same music sounds like crap. I’m talking sound quality here, not emotional response to the music. Maybe it’s humidity or atmospheric conditions, but it applies equally to hi-res streaming, cds, fm or my turntable and over my speakers or headphones. Anyone else notice this or is it just my ears that are the problem?

I’ve noticed this as well. I think it may have more to do with the listener than the equipment. Things like mood, how well you’re feeling, etc. YMMV.

Yep. Since switching to Naim amp noticed this even more. Seems to be very moody. Sometimes its like is this the same amp I bought? It could well be other things at play but its annoying.But when its on form oh boy!

I’ve noticed this as well. I think it may have more to do with the listener than the equipment. Things like mood, how well you’re feeling, etc.

I’ve always taken the same view - I found it interesting, too, that alcohol might play a part in this (where relevant)!

I’m painfully aware that I’m not all that consistent in my assessment of the sound from my kit, and I’ve learnt to be very careful when introducing changes (e.g. room correction) to ensure that they are tested over an extended period and across multiple music types.

Good point. I thought that might be it, but I had to stop drinking 20 years ago and it’s still happening. I do miss my single malts though.

Most of my equipment has been moody like that over the years, but you’re right, from my ancient Heathkit tuner and mono amp way back then to my current setup, when everything comes together it’s magic.

I’ve noticed the same differences in SQ at certain times, but never cared to bring it up.

Maybe something to do with barometric pressure and the interaction with my old biologic equipment. Way older than Heathkit. 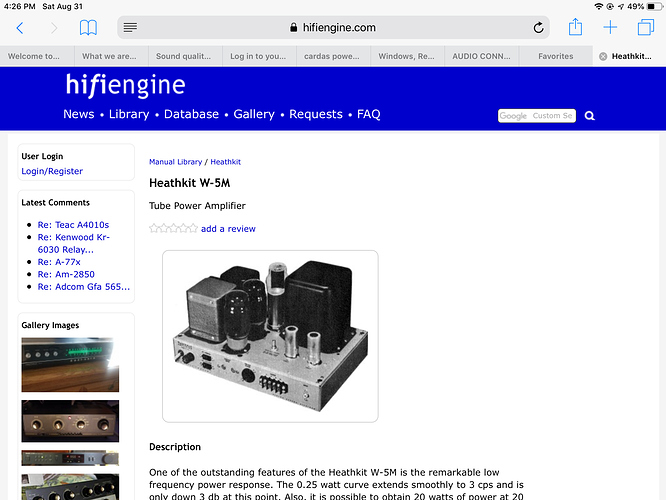 Had a set of these with cages in the 70s. They were nice.

Yes, I am very aware of this phenomon also. A lot has to do with atmospheric pressure, humidity, temperature, ozon particles etc. After all music reproduction is nothing more then modulating the air. The air condition itself plays a major part in this. I’m not an expert on this so don’t ask me what kind of condition has what effect, I am just very much aware of it. I have found this effect bigger then the effect of power polution.
I have a high effiency loudspeaker system with featherlight papercones wich are a bit more influenced by weather/air condition then relatively heavy metal cones for instance.
For example the Kef B110 bass/midrange driver used in the famous ls3/5a monitor has a very high spec variation with temperature variation. They really do sound different in the summer then in the winter. The cone and surround stiffnes and resonance behaviour varies a lot with temperature. The resonance frequency of the ls3/5a also varies with atmosperic pressure
Your ears themselves are also influenced by weather and air conditions.
So yes, day by day variations are not very uncommon. Most audiophiles never give any thought about air quality so they will tell you it’s either the power grid or your imagination.

That makes sense. Actually my late father, who was an electrical engineer, told me pretty much the same thing 50 years ago, but being an 18 year old know it all I thought he was nuts. Somewhere he’s smiling and saying “See, I told you so!”

I have definitely thought the same thing over the years. I always put it down to the mood I was in or stress levels.

Three of us went to the Melbourne Hi-Fi show several years ago, we had a massive night out together the night before the show, that went into the early hours of the next morning. All three of us were nursing hideous hangovers at the show. We were totally gushing over a particular pair of speakers (can’t remember the manufacturer), stayed in the room for a good hour, the speakers were fast, articulate, accurate and had bucketloads of bass, Depeche Mode never sounded so good.

When we went went back the following day we had to go in to demo them again, same set-up, same speakers and the same music. All three of us just looked at each other and asked if anything had changed. They sounded dreadful, the things we liked the day before now had our ears hurting.

Things always sound better with drink that’s for sure.

I also perceived this phenomenon, sometimes very obvious: it is not about small variations in sound quality, but even big ones. Sometimes I perceive this phenomenon even on the same day (I listen to music many hours every day).

The main factors I thought about were these (in order of priority):

Very recognizable. But at least you had a really good time during the first demo

I’ve had the same experiences mentioned above and, while I can’t speak for anyone else’s system, an occasional reboot of my server, NAS and even my dac usually helps to a surprising degree.

Give it a shot.

Switching liquid spirits can help too!

A few years ago when we were exhibiting in an audio show, turning off an air conditioner was found to improve the SQ.

The more resolving your system is, the more sensitive it is to varying conditions.

In my view the power supply plays a central role. Look for power conditioners or regenerators; I have found good discussions about those at Audioquest and PS Audio.

More mysterious to me are the connections between interconnects and devices. Every few weeks, I shut down everything, take the interconnects off, eventually clean them with alcohol and connect them again. It sounds tedious but the result is very rewarding. My representation of it: connections act as electronic devices, increasingly so with time if there is some kind of oxydation. Yet I did not have any confirmation of that intuition by competent persons.

This is perhaps the reason why new cables often sound better than the old ones: trying them you just refresh the connections.

The effect is still enhanced if I take out all power plugs and plug them into their sockets again.

Every few weeks? actually I go into this when I am loosing interest in the music I play. It can last a bit longer but fits well to the experience of sound quality going down with time. There are of course other variations, my system often sounds better at week-ends when neighbours are away and there are a lot less switching devices around on the power grid.

What happens with connections is that if they become oxidized or dirty, they start to rectify the signal. And the sound of rectified audio is beyond horrible. So just a little bit of oxidation will have a very unpleasant effect.

Here’s a topic I don’t recall seeing here. It involves something I’ve noticed over my 50+ years of listening to music on my various systems. Some days everything sounds perfect, and yet maybe the next day with the same system, the same music sounds like crap. I’m talking sound quality here, not emotional response to the music. Maybe it’s humidity or atmospheric conditions, but it applies equally to hi-res streaming, cds, fm or my turntable and over my speakers or headphones. Anyone else notice this or is it just my ears that are the problem?

I’ve heard the same thing. My own guess is that it has to do with my mood – when I’m in an up mood, I listen for the good things in the sound, and when I’m in a down mood, I listen for all the nagging things that are wrong with it. But it could also have to do with issues like power getting dirtier or even my computer adding more noise and jitter than usual (hypothetically speaking). Sometimes too I’ll make a subtle change in my system that makes things sound horrible, or vice versa.