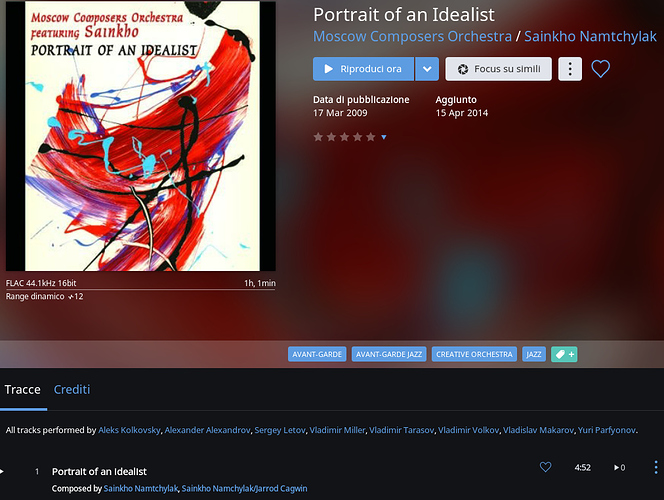 the tracks are credited to sainkho namchylak/jarrod cagwin as a single artists, but they are 2 artists.
besides:
in this album there’s a performer credited sainkho, which is the same Sainkho Namtchylak.

If you select all tracks, then Edit/Remove Credits, I’ll bet one of the tags you see is a single string “Sainkho Namchylak/Jarrod Cagwin”. Roon, TMK, does not parse credits, but rather takes them as is. Remove any and all concatenated credits and replace them with individual credits. Someone before us conveniently (lazily?) found a way to tag everyone with only one tag. That’s not bad per se, but there are side effects. One of them is the essence of your question. Add a tag for Each artist, and any “rich metadata” will link to either.

Notice on your pic the long list of Performers who are in fact Composers. That’s because your tags have added Primary Artist status to each of the composers. Try deleting those too.

All of the above is undoable. Good luck.

i didn’t realize this possibility to add / remove credits.
so, this can solve some unbearable situations (not this one…)

about the other point: the long list is not of composers, but actual performers (members of the moscow composer orchestra, that’s why it’s so long)
in my tag scheme, ALBUMARTIST tag has the same role of roon album artist (one single tag, like “miles davis quintet” tuck&patty and so on). while i use the ARTIST tag for the actual performers track by track.
and i already used PERSONNEL to store the performers roles, and WORK for the composition.
so, my scheme was already more or less the same of roon, with some differences:
-PART missing (and i like the structure in roon)
-my syntax for personnel was different (and still is…)
-i used BAND to store orchestras or ensembles. it was a bad choice, because this tag is interpreted as albumartist by some softwares… , so i changed it in (almost) my library with ENSEMBLE, following Roon.

at the moment, importing my library in roon has not produced strange effects, apart some repetitions. it’s difficult for me to distinguish what’s roon contribution, and what’s already in my tags. these are more notable when there are errors, in roon metadata or my tags (yes it happens…:))
the main “news” for me is the cross reference between albums, the possibility to jump to different versions of the same composition.
in my library this was not possible (i’ve never found a way for example to treat live, alt tk, extended, remix and so on of a title).
it was partly possible in classical by a certosine WORK/COMPOSER tagging, but it is difficult, and in general not so effective within squeezebox environment.

@staff @support
it’s an old post…
the problem of artist “sainkho namchylak/jarrod cagwin” is in allmusic:

that artist does NOT exist, and is wrongly credited to some albums of sainkho namchylak with no connection to jarrod cagwin.