I just wanted to mention that Roon is both spouse-approved in our household (new software rarely is) and meets my particularly specific preferences. It’s really an impressive achievement and a product I’m happy to support and evangelize.

The experience of many of us is that Roon remains “geek stuff” and other members of our families tend to leave it to us to use it. That is frustrating both because they miss out on the thrill of discovery that Roon brings, and because Roon can become a barrier to their enjoyment of music in the home.

Once set up I would hope that Roon can be easily used by anyone in the family.

I’d like to see more work done on Profiles to enable people to see different default views of the library (exclude a genre for example).

I’m sure the devs would be interested to know any suggestions or issues you (or others) may have in order for less technically minded family members to use Roon and fall in love with it like we have.

I wonder with 2 or more user profiles how the app remembers what profile is in use or does one constantly have to check …I seem to recall setting up a 2nd one and that it often came up as the one that was selected even though its not my one.

can anyone confirm if its sticky to the device or randomly selected each time the app starts up?

Profiles do this, and more, apparently…

I’d like to see more work done on Profiles to enable people to see different default views of the library (exclude a genre for example).

I’m sure the devs would be interested to know any suggestions or issues you (or others) may have in order for less technically minded family members to use Roon and fall in love with it like we have.

One question right off the bat—how do different profiles manage Last.fm scrobbling? Does whatever profile initiated playback then scrobble plays to that Profile’s logged-in account? If the specifics could be locked down, that might be a good implementation for multiple-user family or small-office deployments (not sure how the licensing works on that last bit).

The experience of many of us is that Roon remains “geek stuff” and other members of our families tend to leave it to us to use it. That is frustrating both because they miss out on the thrill of discovery that Roon brings, and because Roon can become a barrier to their enjoyment of music in the home.

I—surprisingly—found the opposite to be true. We had been using iTunes to share a music library with my wife and play throughout the home, configured like this:

This setup worked pretty well, allowing my partner to (generally) control playback from her phone and play to the bedroom speakers or kitchen Deepblue. Unfortunately, Home Streaming couldn’t play a large portion of my library (never could figure out the cause), the system always felt sluggish, and the iPhone Remote app is buggy and poorly maintained (if not stalled in development purgatory). Also, I spent way too much time managing the library and not enough time enjoying it.

On the other hand, once I had Roon setup, the iPhone Remote interface was immediately intuitive for my partner and things always “just work.” The automatic radio feature (at the end of queue playback) is really convenient for her because she really doesn’t know everything that is in my library and is so paralyzed by choice that she would rather just not have music playing at all. So now she just picks a song or album she’s always loved and lets Roon handle the rest.

I still use iTunes to manage my library on a personal workstation (before syncing to my Roon Core on that original Mac Mini), but Roon has separated playback from my library management, making the whole setup simpler and more stable for her. The result is powerful and network-managed without requiring a Tech Support / Enthusiast mindset to be used effectively. Hopefully your team can find a way to convey that message to a wide audience of potential customers.

+1 on profiles showing differing views of the library - I’d specifically like to be able to enable and disable folders on a per-profile basis.

My girlfriend is really digging Roon, and now grabs my iPad away from me to build playlists, and search for albums… 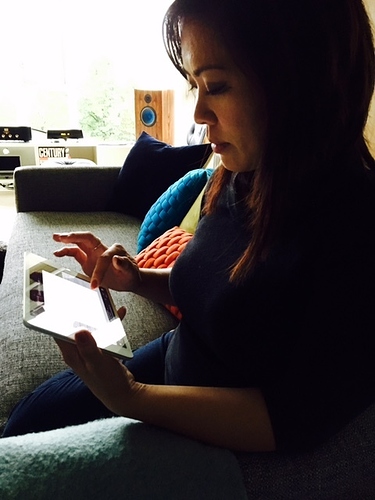 A post was split to a new topic: “Default” profile

I’l tell you, I made my wife use Roon and decided to share the long way till this happened with you. Maybe this might be a blueprint for your own success.

The long voyage began when I moved into her house and replaced her old Bang & Olufsen BeoSound 3000 system with my Audiovolver, my Horns, the Krell power amp and my Woofers.

She had almost never used the BeoSound before, but now it became important. Great

“Use Roon intead” I said but I heard that it is much too complicated to use the phone for CD playback.
So I decided to connect the BeoSound 3000 to the Audiovolver (analog cable no S/PDIF) and explained her the button to press to select this source. “I can’t remember what button I should press.”

Next I designed a word page with images, printed it with the instructions about how to turn the Audiovolver on and how to select the source. This is just pressing two buttons on the remote! These instructions disappeared in the drawer and were used maybe three times a year after asking me what to do

And now, somehow, a miracle happened.

At my son-in-law’s house, she heard Marlon Williams’ Make Way For Love album and fell in love with it. Back at home: “Would you please burn a CD for me?”. I said we can listen to it with Roon. “No I like to get a CD for my car” I ordered a download it in the Quobuz store and burned it on CD.

“Really nice of you, and how can I play the CD now in the living room”

I left to my study.

There I added her as a new Roon user and saw for my pleasure that the favorites of this new user were empty! Then I tagged this album and also a Christmas album and a Frank Sinatra album she likes as her favorites. Next I went to her phone (yes Roon was still installed months before but never used) and opened her favorites. The three albums were in place. Closed the Roon App and reopened it. Jeah! It still showed the page with the favorites of my wife. THANK YOU ROON GUYS this is one of the really great features

Next I went to my wife and said “look here, i want to show you something”, opened the Roon App and she saw her favorite albums. I told her to touch one of the the album and press play.

Oh God, seems she was convinced!! “How can i change volume”.

Now I knew that I had won. One more happy Roon user on this planet. Perhaps this new Roon fan is not using all the features, but the simplicity of this approach made it possible to have an entry point and the chance for further improvement

Just takes a man with patience, understanding, and perseverance.

Mine is slowly getting it but her damn love of Spotify is the kicker so all my endpoints are Spotify friends - 3 are Lumins, many others are RPi with RopieeeXL and some are just airplay ready that she can pick off in Spotify, but at least she now uses roon when we setup something to play while going to sleep with a sleep option now in roon that’s the winner.

plus I have 5 rooExtend units with M$Dial and 2 Nuimo s for my indulgence.

I know how you feel, my wife would listen to a cheap Echo Dot rather than use Roon because it is easier to say “Alexa, play Greatest Hits Radio” than find phone; unlock phone; start Roon; select My Live Radio; select radio station; press play. And it’s hard to disagree.

What did it for me was to get rooNuimo - just touch here and it plays for you!
But sometimes she listens to another radio station, so it would be great if rooNuimo could handle more than one radio station…