And there it is: support for the Raspberry Pi 3 Model B+!

For the rest this a modest update: some improvements and some more preparations for Sparky support.
And to those that run a display: as this version has an updated extension you need to re-enable it.

One final remark: I’ve noticed some stability issues on WiFi 5G. I’m testing a brand new kernel as we speak so expect another update in a few days.

For completeness, here’s the changelog:

FYI, @spockfish, I did not need to enable the extension for my 3 displays. V91confirmed. Thanks Harry.

@spockfish I have some problem updating to (091) on my Pi. When I enter the webpage I see you have an update. When I choose to update I get a message “RoPieee is busy updating…” but nothing happens it just says that. If I relode the page I get you need to reboot but when it has rebooted it is still on version (083).

let it go. this can take seriously some time, so just let it be for 20 minutes or so and then reload the page.

Yes as Spockfish says it really does take a while.

Well I left it over night and it was still saying updating this morning. Did a reload of the page and got the message of reboot but it is still on 083.

Can you send me feedback (from the ‘advanced’ page)?

Here is the advanced page. 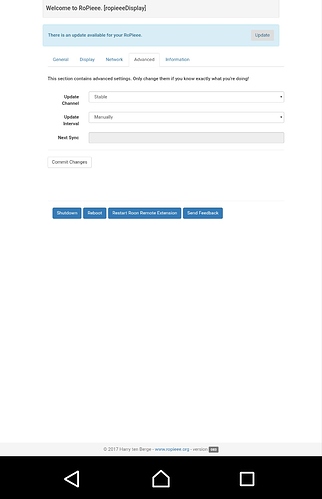 Yes, and then please clock on ‘Send feedback’.

Gahhhh I was a bit stupid there

Hmmm… that’s strange. The file is empty. Can you reboot and try again?

It might be that your SD card is toasted.

But if it is that would it still work as it should? Everything works as it usually do.

I would re flash the latest image to the same card and see how. 32gb and larger always give me issues but 16gb cards are good, as are 8gb

I will try it later today and see if it works…

@spockfish I did a clean install on the SD card and now I am runing (091) and there were no problem with the SD card.