Standalone endpoint for headphone use

I’d like to put together an all-in-one, standalone endpoint for headphone use. As cheaply as possible!

I think I’m right in saying that I need a bridge, dac, and headphone amp and that the cheapest way to do that is most likely going to be a Raspberry Pi using Ropieee (which I already use as a monitor for one of my endpoints, so I’m vaguely familiar with setting that up).

The reason for the post here is to get any advice I can on the hardware I need and a bit of a steer in the right direction.

I was looking at the Hifiberry Amp2, but it seems that it doesn’t have a headphone amp, and that’s where I start to get a bit unsure of myself and questioning what I want!

Has anyone put together anything like this that could share deatils? Simply I want a small box on the corner of my desk with ethernet in and headphone out - seems like it should be easier than I’m making it

Be careful using HAT amp modules as many wont tolerate a common ground signal for the headphones. Anything using a 3.5mm jack should be fine but might struggle with some headphones that demand more power.

This is what I built RoonBridge on Volumio Raspberry Pi Image?

Other options could be to use a DAP like a FiiO that can run roon as endpoint.

How about your RPi idea, add an Audioquest Dragonfly Red or Cobalt

Using something like the Pi-DAC Pro or its cheaper sibling should give you what you need, but beware that with higher impedance headphones you’ll likely want something with more oomph (as @wizardofoz mentions).

If going the Dragonfly route (of whatever colour) has anyone considered or even tried plugging it into a cheap Android phone instead of a Pi? That would give you the added benefits of a local screen to control it (you’d obviously run the Roon remote app so that it is seen as an endpoint which also gives you all the other remote capabilities) and it also becomes a portable solution probably with fairly decent battery life which is nice if you want to go to the kitchen to make a cup of tea or whatever without needing to take the headphones off. It’s surprising how cheap some of these almost 6” screen phones are, between £50 and £80, so not far off the price of a Pi+case+PSU.

Apparently one issue is that some Android phones don’t pass the digital audio out through the USB port in which case the Dragonfly wouldn’t work of course but with Amazon’s returns policy (at least in the U.K.) it would be easy to try at no risk.

I decided to keep it simple and go for a Pi 4 (with touchscreen) and the Dragonfly Red, which hadn’t even ocurred to me until @Mike_O_Neill (and then @Julian) suggested it - so thanks.

I saved a couple of quid with Black Friday deals and should end up with a touchscreen display (via Ropieee) here on the desk, which I’ll control from my PC but this also gives me the option to take the dragonfly with me when I travel or want to roam about the house - which is useful as I’m away from home three nights per week at the moment so I’ll get some use out of it in hotel rooms and possibly at my desk in the office.

Thanks everyone for the suggestions

I do the equivalent, I have the Apple camera kit, for my iPad which is a USB female to Lightening, so I can plug my Dragonfly into it

It plays Roon around the house as well as local files. My kitchen system is my iPad to a Beoplay A1 Bluetooth loud jenough to cancel out the sizzling of sausages

There is an Android app USB player pro , I think, which by passes Android and plays direct to a
USB. You need to make sure the device supports OTG in the case of Samsung. There is a small app that tells you

Final beware is the 1.7 upgrade needs Open Gl 3.0, myTab A doesn’t have that support so I cannot update to 1.7 , bit of a paper weight now

I’m an iphone user myself, so will use the Camera kit (the dual-socket one) in the hotel. Should work well for me!

Yep, mine is the single usb version but other folk use the charging version OK

A quick update as Amazon decided to deliver most of the bits a day early! 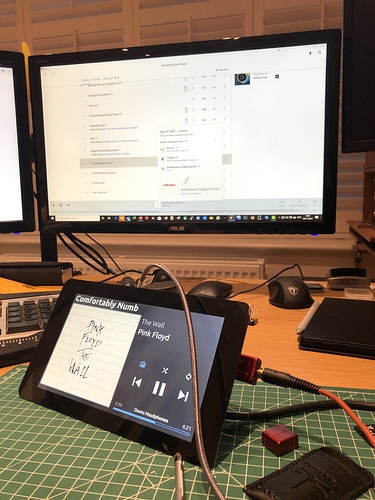 I’m still missing the proper power supply and the case, but proof of concept has been achieved!

Thanks for the suggestions everyone, this is exactly what I needed - quality is perfectly good enough for the headphones I’m using and I have the added benefit of the Dragonfly DAC to carry around with me.

Avoid that pi and Dragonfly they are a very underwhelming combo, the dragonfly looses it mojo with the pi I find. Maybe its the noisey usb on the pi, sounds so much better in my pc and fanless NuC than the pi.

To be honest - it sounds fine! I’m sure the noisy USB could be improved upon, but this is about convenience. I can always sit a bit closer to the Pro-Ject Pre-box Digital and plug in to that if I’m in a really picky mood. This is primarily for listening to the radio whilst I’m working and occasional listening when everyone else is in bed. My headphones aren’t the best either! 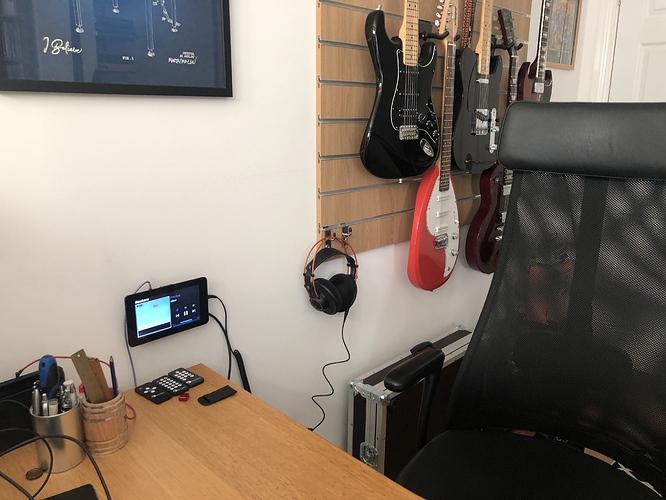 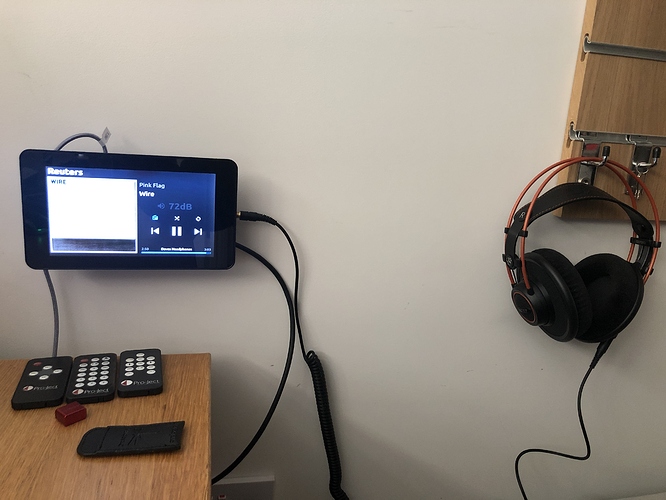 This has met expectations. I stuck it to the wall so its taking up no desk space at all. Compact, sounds fine and out of the way when I need it to be.

This is what I have set up on my side of the bed for night time Roon listening on headphones. Just using the now-defunct (but readily available via ebay) Google Chromecast Audio. Cost me £30 and plays hi res audio on Qobuz. Phones are plugged into the 3.5mm output socket. Obviously you need to be careful you don’t 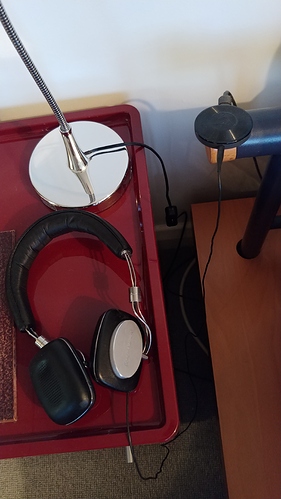 @Dave_Kitson
Was wondering what that wooden unit is called where the guitars are hanging ( guess you can hook up many other stuff, too ).
Thanks a lot for your reply.
Cheers
Thomas

Here in the UK it’s called slatwall. It’s what they use in shop displays and you can get a variety of different hooks, hangers and shelves that slot into it on eBay.
The challenge is getting a small quantity delivered as a lot of the manufacturers seem to want to sell it by the pallet!

Cool, thanks a lot. Will try to get’em here in Germany.
Cheers
Thomas

Consider the Orchard Audio PecanPi Streamer. Roon endpoint, exceptional DAC and it can function well as a headphone amp.

A little too late - but that does seem like a neat little box!

For anyone else reading this thread with similar interest, I set up a Rpi 4 4Gb put in to a SmartPi 2 Touch Display case with the official Rpi touchscreen running RoPieeeXL and am using one USB port going to my Chord Qutest & another going to a Meridian Explorer2 (each with an AudioQuest JitterBug in line) and Roon recognises each DAC as a separate end point. I then link them so that the display will show whatever track I’m playing on either DAC (I listen with Qutest into amp & speakers when I can listen ‘loud’, and amp off & headphones at other times).
In theory you could actually have 4 USB end points off Rpi, but for me with JitterBugs, there isn’t much space unless you use an extender. (I also have an RF remote connected via a tiny USB dongle) [BTW, please support the guy who wrote RoPieeeXL by contributing some money if you use it. It is an amazing piece of software for ‘free’!]