Hi there, I am using Roon since two years and at that time, shut down my Audioserver every evening. In the meantime I play music using the Opticalrendu, which is supplied by a Farad super3 power supply. After stopping the music played by Roon and leaving the PS ‚Switched on‘, the power supply gets quite warm. I was told that the Roon nucleus has network traffic even when no music is played. And obviously, it consumes power. Is there a standby mode within Roon, or do you have another advice to avoid energy waste …. Thx!

First, there’s no need to use a big inefficient linear power supply with a NUC or Nucleus: it makes zero sonic difference, it just gets warm!

Second, there’s no “standby mode”, though you can power it off using a web link (eg, http://rock.local/1/poweroff), and power it back up with a “wake on lan” app. The WOL function is unfortunately not built into Roon application.

I turn my NUC on/off every day, Americans don’t understand, they don’t have to pay European (German) electricity prices

I have a nuc 10i7 and I turn it off with the link like you said but I can’t in any way wake it up with wol.
In the bios I set the status wol but the nuc just won’t turn on.

Can I ask how exactly you do that?
Thank you very much

To power it up, I use Tweaking4All.com - miniWOL v2 - Quick and Easy Wake On LAN Utility
And/or (on ipad): ‎Mocha WOL on the App Store

In mocha : On which port?

9 I think, I didn’t change the default settings, I just added the MAC address for my NUC.

Thx for your comments, I will do it that way! Thx

During storms, the off switch is directly in the outdoor line

Is no different with us on the coasts, but I also always turn everything off, only the music stays on when I’m awake

I thank you but unfortunately it does not work for me.
Maybe I’m doing something wrong in the NUC bios, would you have a guide for the bios or some step by step photos just to verify that my configuration is right?

I thank you but unfortunately it does not work for me.

Thank you I tried but it doesn’t work.
I swear I’ve tried everything from resetting the bios to updating it but no dice.

I will use the traditional method: my finger 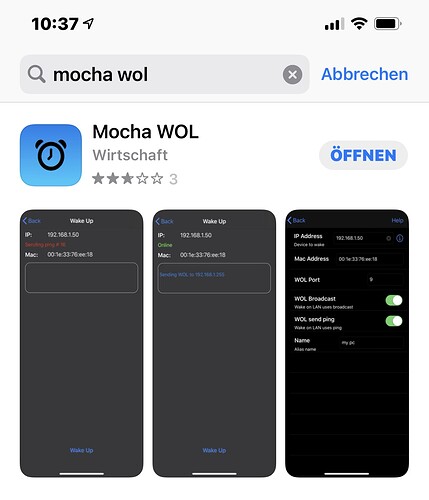