Storing music on HDD or SDD?

I want to switch to NUC, and I know that the SSD drive is used by Roon OS and database and it should not be used for storing music. That’s why I plan to add SATA drive for an internal storage for storing music. I see that the drive can be either SSD or HDD. The benefit of SSD is that it is faster, but they usually come in smaller sizes, whereas HDD is slower but comes in much larger sizes. I was wondering whether there are any performance drawbacks of storing the music on a HDD as opposed to a SSD?

whereas HDD is slower but comes in much larger sizes. I was wondering whether there are any performance drawbacks of storing the music on a HDD as opposed to a SSD?

There are no performance drawbacks of storing music on a HDD, the only thing is that a HDD ‘can’ be heard, whilst an SSD is completely silent.
Capacity should not really be a problem for SSD - up to 8TB now - but of course for ‘a’ price.

If you do not mind the possible noises of the HDD, I strongly recommend to go for that.

Other advantages of SSDs is more robustness and faster Backup/Restore. Also syncing with other sources like iTunes/Music-App is much faster with a SSD.

I run with a USB attached HDD and have no issues.

Reliability is more important than speed. Roon needs that drive to be fast only for the initial indexing and scan but once that is done it’s plucking music files at rates that are a fraction of even the most modest budget HDD. You really don’t need speed for reading the music files unless, maybe, you’re pre-upsampling to like DSD1024 or something non-standard.

So, my vote, go big and don’t worry about running out of space when loading all those sweet sweet tunes.

I would add that most HDD for customers have a lifespan from 5 to 10 years and humidity or temperature variation could affect it even if you don’t use the disk regulary. Around 20 % of HDDs will give up in the first 4 years. So it’s a good idea to buy two disks and make regular backups. That’s also a good idea for SSDs, but failures are less common. There’s no mechanic that can fail.

HDDs have a significant price advantage if you are getting any kind of size.
Yes, you can hear them a bit if that matters to you.
If your Roon\System disk is SSD, and music storage is on HDD, there isn’t any practical performance advantage to SSD. Their speed isn’t relevant in that scenario.

Really depends on where the NUC is to live , if in your listening room then SSD, if anywhere out of earshot then HDD.

As everyone has said there will be no performance issues . I use a PC with internal 4Tb HDD in another room from where I listen

Bottom line is Financial and Noise. I think these days SSD would be my choice but 4Tb is still quite an investment compared with HDD

I just moved this week from network HDD to external SSD (Crucial x8) direct to my Mac mini which runs the core; performance wise I saw a HUGE jump in refreshing when importing new music. But experienced NO difference in playback.

As I currently am re-ripping my entire cd collection the SSD is obviously a major speed improvement. My old HDD is now my back up drive for the music, still in the network but not loaded in Roon.

FWIW.
My NUC is in a high case so have an SSD in there. I just use that drive as one of my backup locations though for Roon. The other backup location being on a NAS running a set of HDD.

For my ripped music I have a USB SSD attached to the NUC and Roon points to that for my local library. When I rip CD / download music, I do it to the NAS HDD. I then rsync the NAS HDD to the USB SSD.

When I just had music on the NAS HDD, I found that the drives were spinning too often, creating noise and Roon search was also very slow.

Basically, having the music on an SSD attached to NUC is super fast and totally silent.
SSD is the way to go.

There are no performance drawbacks in storing music on a HDD as opposed to a SSD and playing music from it in Roon.

As @anon90297517 says, a HDD makes a little mechanical noise, a SSD is silent. Depending on where the NUC is situated, the noise can irritate some listeners.

I’ve had a HDD in my NUC (situated in my main listening space) for the past four years, and never been bothered by noise. Having said that, I’ve just upgraded the internal drive to double its capacity. This time I went for a SSD, the price premium over an equivalent HDD was acceptable to me.

Bear in mind, though, that if you do use an HDD internally, 2TB is the largest size you can fit. All SSDs are 9mm* thick, whereas HDDs up to and including 2TB are 9mm* thick, but above that they’re 13mm* thick, due to an extra platter, and therefore won’t fit.

EDIT: I found this out by personal experience! A year ago I bought a NUC8i5BEH, and also picked up a 4TB HDD to fit inside, but when everything arrived I realised the HDD wouldn’t fit, and used it briefly with a caddy. I realised, though, that I only had 1.4TB of ripped files and therefore could easily get away with using a 2TB HDD, so I bought one of those and fitted it. Very tidy setup, although there is a faint amount of noise from the drive, which isn’t an issue if, like me, you have the NUC elsewhere in your home, but it might be if you have it in your listening room.

I am running ROCK on NUC more frequently playing redbook, so I put ripped CD and 16/44 quality into internal 2TB SSD, while some DSD512 probably over 10GB per album, I store them into external 5TB 2.5" WD Black gaming drive, very good value, top and bottom aluminum plate for cooling and using exfat format, so you can easily take it down and do the copy and backup on windows or mac computer. so I try to accommodate most of my music in 2+5TB storage plus Qobuz/TIDAL, and shut down my NAS to avoid any chance of hijack if running 24/7 online (but power on for update weekly) and less wearing.

WD Blue, Red and Green 4TB SSDs are all 7mm. They are, but it’s HDDs that are bigger and won’t fit. As I said in my post (as I understand it anyway) all 2.5” SSDs are the same thickness; it’s the HDDs that are thicker once you go beyond 2TB.
(I obviously got the size wrong, but not the fact that any suze 2.5” SSD fits, but only particular HDDs).

I recently purchased a Sonic Transporter setup with a built in 8T SSD… over 300,000 tracks and it is fast and rock solid… Music Servers – Small Green Computer .
their System Optique has transformed my appreciation of music. It is such a leap forward in terms of fidelity it is actually hard to describe. It is also super compact compared to 40,000 CDs !

SSDs have a performance advantage regardless of the size of files stored and accessed. This has to do with the fact that hard drives spin down their platters after a time of no use to save power and protect them from physical damage. However, this means that when you ask for a file the drive has to spin and then seek to find the file. SSDs simply request data from the respective cells. While the difference is not huge for smaller files, its additive to all of the other latency involved with networking. Added to the unreliability, small throughput, power consumption, and noise of spinning disks I would only consider a hard drive if tight on budget or storing a huge amount of data.

Saw some discussions earlier in this thread about SSD vs. HDD reliability.
This article summarizes two important papers on the topic. 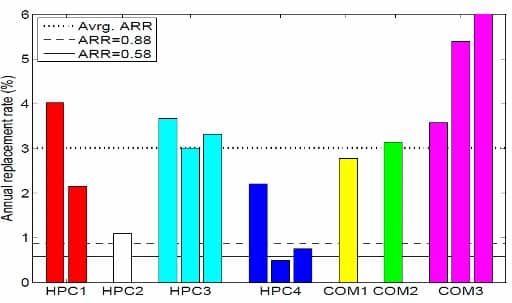 Hard drive reliability has certainly generated research. A highly noteworthy example is the work of (2007), Bianca Schroeder and Garth Gibson a very

The short answer is HDDs have a practical failure rate a bit higher than SSD but SSDs experience unrecoverable data loss at a much higher rate. To me that says HDDs end up more reliable.

My opinion is you need to keep the HDDs powered up as the heatup/cooldown cycle seems to cause them to fail faster. My brother worked at a major disk drive manufacturer for many years and he mentioned to make sure I clone or backup my SSDs.

I think the bottom line is that all drives whether HDD or SSD will eventually fail. They’re consumables. Always have a backup strategy, so when your drive fails, it’s a painless rather than a painful experience to recover and carry on.

Good points. However, it should be noted that solid state cells have become way more stable and controllers are leaps and bounds more reliable these days. It should also be noted that recovering data from drives is a highly expensive process. Not feasible for many people.