Is the OSX Tidal desktop app decoding MQA in software?

I don’t think so, just delivering it to a decoder. This is why so many DACs are receiving software updates.
The unfolded MQA files should still sound equal or better than CD though.

The Tidal desktop app does seem to be decoding MQA in software. Check Settings -> Streaming -> Sound Output -> Built-in Output -> Gears -> Passthrough MQA. “Disable software decoding of MQA.” If not set for passthrough, then that setting and its description imply that MQA software decoding is enabled.

DrTone, when you say you are “seeing” sample rates over 48, what are you looking at?

The sample rate lights on my DAC.

The MQA content is below the noise floor if you can’t decode it and as such irrelevant. You still benefit from the encoding process with enhanced timing.
MQA is backward compatible. That’s the point really. Knowone loses oh, and the authentication.

@WiWavelength - So does that mean decoded MQA is being sent via Roon to my DAC? (my config is: Roon–>HQP–>µR–>non-MQA DAC)

No. To my knowledge, Roon presently cannot decode MQA. But it can output bit perfect, undecoded MQA.

This appears on the Tidal app on my iMac when I select the select the Built-in Output gear in Streaming under Settings. 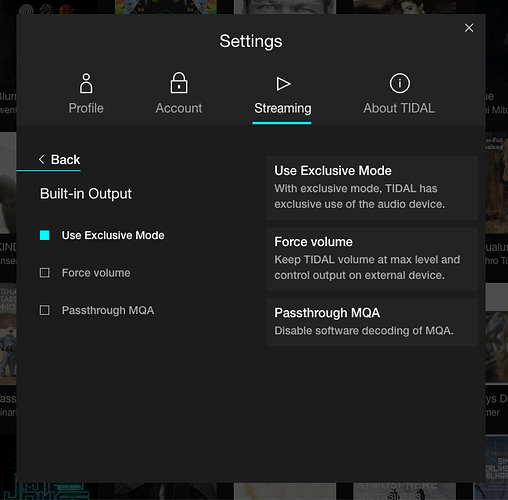 My Devialet shows 96kHz with MQA decoding in the Tidal desktop app activated without it it shows 48kHz same as Roon does so Tidal unfolds the full hi-res file. Right now I am playing John Coltrane - My favorit things in 24/96 from Tidal desktop through Devialet AIR to my Devialet 440 Pro, the sound is really fantastic

Software decoding has always been planned for MQA. See the answers to questions 42 and 43 here.

DSP also has to be done carefully with MQA and requires two stages of MQA decoding either side of the DSP to get the full MQA. See question 65 in the above.

I found four versions of the Moondance album on Tidal and the last one is MQA.Love this album.

Also lots of Joni, Aretha, Otis, Donny and Jackson Browne & Doors [not listed under Masters as yet]…and suspect I’m only scratching the surface

Well right, there was always going to be software decoding at least in the Tidal apps. The question has been whether MQA would allow Roon (and others) to decode MQA streams and files in software before sending it to the DAC rather than requiring purchase of an MQA licensed DAC. Of course in Audiophile World, “best sound quality” is highly subjective and you will run yourself into bankruptcy chasing that dragon.

I suppose I should turn off up-conversion in HQP (as well as taking HQP out of the chain) and see what Roon is sending my DAC.

EDIT: So… there are two version of John Coltrane: My Favorite Things showing up as Tidal albums in Roon. The first one plays as 44.1 on my DAC (no HQP) and the second version is playing at 48 KHz. Will try some other “Master” albums and see.

EDIT2: Seeing the same behavior on other albums listed under “Masters”, Madonna: Like a Virgin (44.1 and 48 versions) as well as Joni Mitchell: Blue, however I haven’t found anything that comes in above 48 KHz.

EDIT4: My DAC doesn’t show 16/24/32 bits, but I wonder if these are folded (i.e. not decoded) MQA streams and they boosted the stream rate to account for the added MQA elements and maintain some sort of AQ / data-rate parity with the pre-MQA 16/44.1 streams?.

EDIT5: Roon is showing these 48 KHz streams from Roon to also be 24-bit. So it appears that they increased the file sizes a bit to accommodate the added MQA data elements.

Also lots of Joni, Aretha, Otis, Donny and Jackson Browne & Doors [not listed under Masters as yet]…and suspect I’m only scratching the surface

Scratching the surface is right! Plenty of stuff not listed under masters which is also there. Even following the artists listed under that masters section doesn’t capture it all. I did a Warner Bros. search in Roon which helped me find some artists I might want to search for and it threw up a couple of names.

I hope they come up with a better way of distinguishing it all soon.

I am not MQA enabled (yet!) but it is already noticeably better than the Hifi setting and my rips. Luckily the Dragonfly Red I have is due to be upgraded at the end of the month!

On Roon no Master q. and software decoder. I think that dev must rebuilt Tidal module in Roon (propably on 1.3) to implement new feature. So, If you play via Roon, you don’t have now master quality imho. 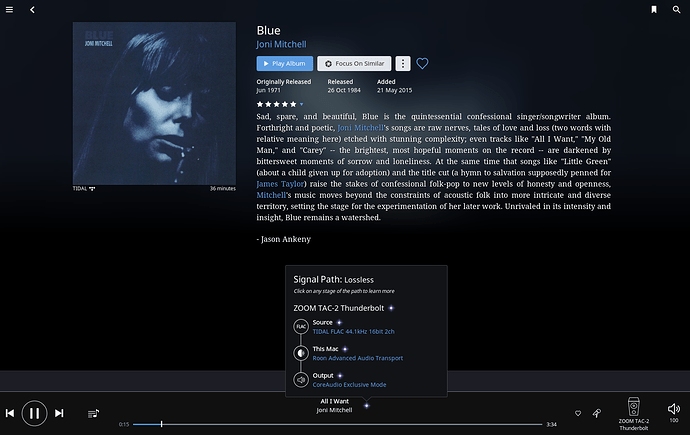 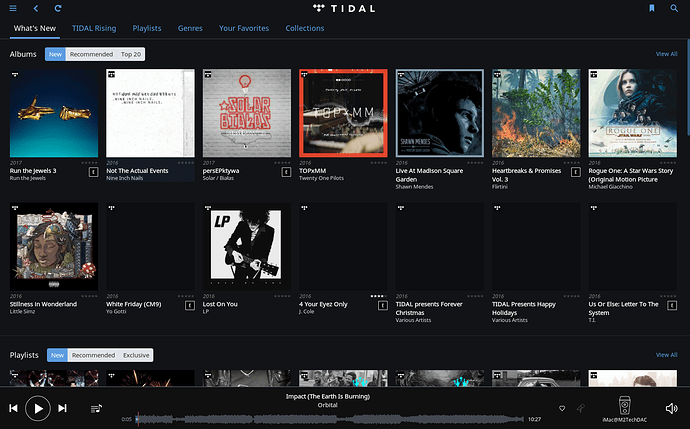 See… in what’s new section you have only new, rec & top. Only in Tidal.app (exe) you have Master. And, of course you don’t have option in Roon /Tidal to change decode mode (pass or soft). 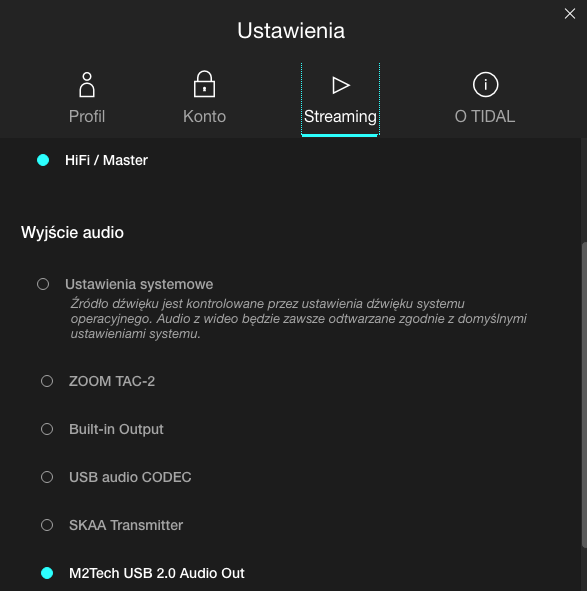 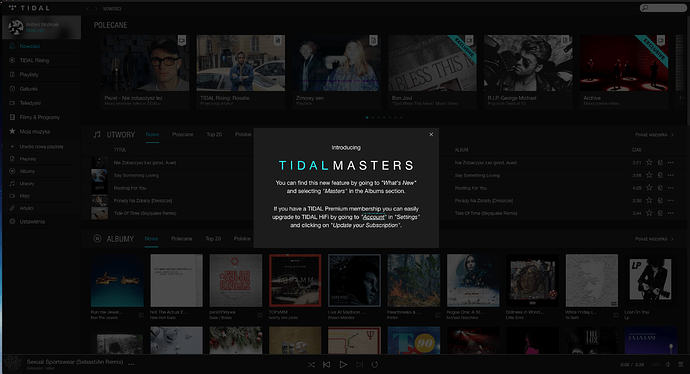 On Tidal.app works perfectly, software decoder in my opinion is only solution for MQA. Warner give us 30k songs now, so not 10 albums/songs in demo mode, but 30 000 tracks.

This is what I’m seeing in Roon for a title that shows up as “Master” in the Tidal desktop app: 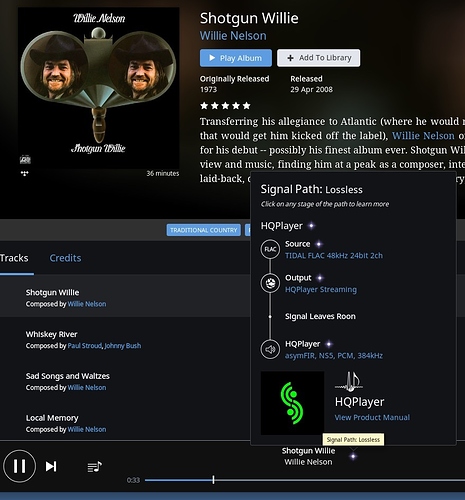 My Mac Mini isn’t close enough to my DAC for a direct USB connection. And this is the second “Shotgun Willie” album that shows up in Roon under Tidal Albums (the first one (shows up as 16 / 44.1) has more grayish or washed out album art). 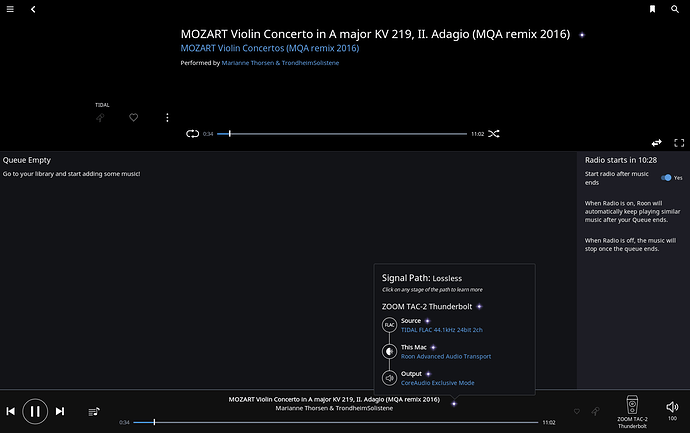 …but this is material only for MQA hardware decoder (DAC) or this HQP plug, but you haven’t Tidal MQA decoder, also this “Master” integraton in Tidal interface dosen’t exist (see above). So, you have “HiFi only” version Tidal in Roon for now imho.

The BlueOS iPhone app clearly highlights MQA files when playing them.
Obviously only possible when streaming to a bluesound device.
Not clear on bit rate etc nor whether the app is decoding or the device.
I guess we’ll find out via Roon signal path when BS becomes Roon ready in a few weeks.

Tidal mqa files via BlueOS I meant to add

Mhm, it’s correct, cos Bluesound now is full compatible with MQA (also some NAD’s devices with BluOS are… the same producer here, only different marks).

And this is what I was suggesting above… these are folded / un-decoded MQA streams, but they are delivered as 24-bit / 48 KHz to account for the MQA overhead without any real or perceived loss to audio quality when compared to 16 / 44.1 streams without MQA data.

I still have to wonder how much MQA is paying Tidal to increase storage and streaming costs as well as implementation costs for a service tier that comprises less than half their subscriber base with no increase in monthly per/sub revenue.

That is big question (about SQ) in Tidal MQA integration:

Like you see, we have better resolution support (ie 24/96) than MQA files flies

(24/44), and that “unbroken version”. Hmmm? This text is from FAQ on Tidal site (Master integration) 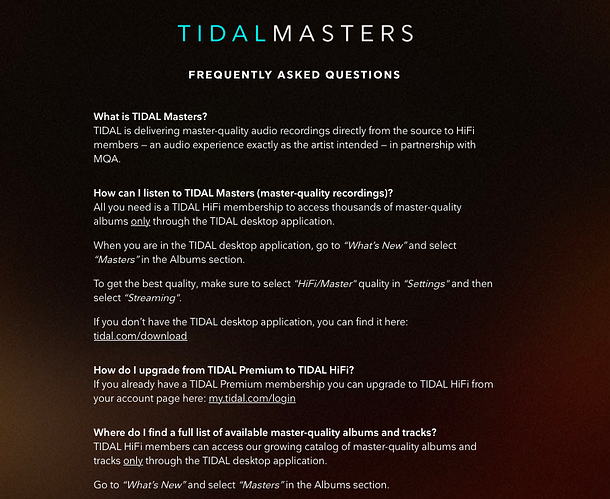 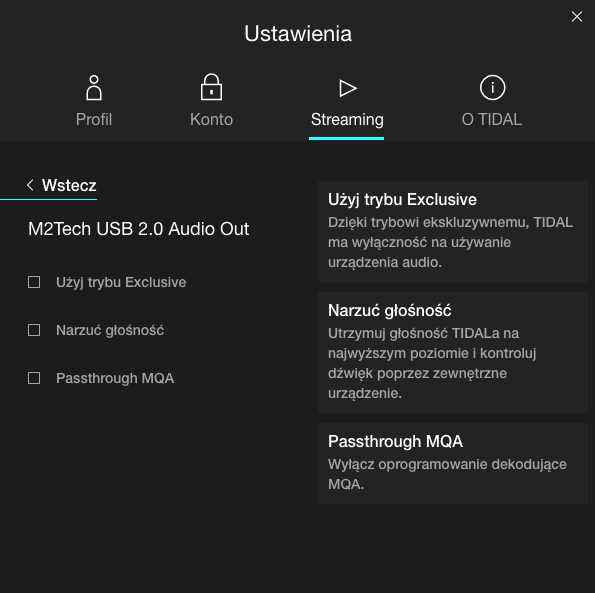 Yes this is exactly how Bob Stuart has explained that it works.