This is why these thing offer trials, and honestly, how long does it take to decide? Recently a load of cliff hangers got burnt by Roon increasing their lifetime price, and then the complaining started… “I trialed it for 3 years, and was just about to buy lifetime, and now this!” . Start the trial, and use it to decide if you want to commit, this is the function of a trial. Otherwise cancel and move on. No drama!

I probably am overthinking this.

… one if my downfalls when it comes to spending $$$.

Ok, so I started to sign up with the annual plan and saw this 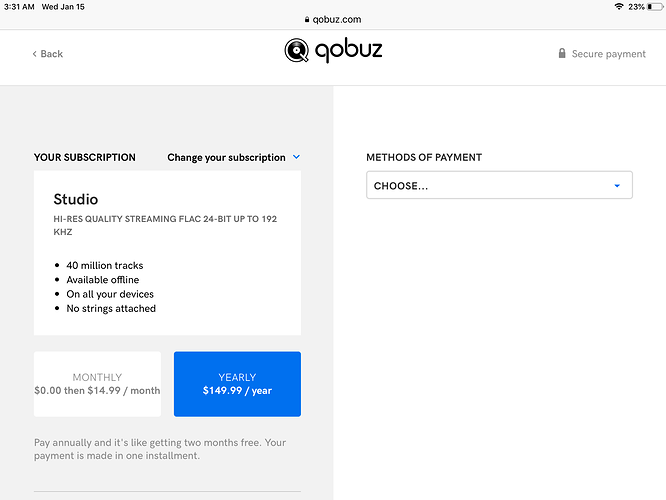 This seems to indicate the monthly plan comes with a 30 day free trial period, but the annual plan does not.

I sent a message to Qobuz asking for clarification. It would really suck if there is no free trial period with the annual plan!

In the perpetual comparison between Tidal and Qobuz, my 2 cts.
Had a Tidal account for many years and liked their large music collection although their preferred music taste is definitely not mine :). But due to their larger collection, that’s 1-0 for Tidal.
After some Qobuz trial, I noticed that I picked up more new music due to their pre-selections. So now I use also Qobuz as in the end, this hobby is about finding and hearing music you like (at least for me).
So that makes it 1-1.

Lately I did some improvements in my setup (better DAC and pre-amp) and now I also notice a difference in sound quality when streaming over Roon. For instance, yesterday I played Supertramps ‘Fools overture’ and noticed that the soft piano play at the start of the track sounded somewhat distorted and there was some shifting going on in the 3D location of the instrument. I noticed that Roon had selected the Tidal track. Switching to the Qobuz track made these problems disappeared, the piano sounded fine again and was firmly located in the 3D scene. Both 16/44.1kHz tracks.
Maybe it has something to do with the server location (I’m in Europe), used compression technique or master tape used, not sure.
In the past, I did not notice such a large difference in sound quality using a headset comparison. As I had no Roon in that time, I used their apps.

So overall is Qobuz the winner for me at the moment.

Qobuz every time for me. FLAC Hi-Res instead of Tidal’s MQA offering is superior IMHO. Customer service is much, much better and your streaming library is stable in terms of rights issues. I was always losing albums in my Tidal streaming library. Hope this helps

The reasons I switched from Tidal to Qobuz are here:

I was subscribed to TIDAL, but bought the occasional download from Qobuz. Now that Qobuz integration is there, I have switched because: The Qobuz content is comparable to that of TIDAL for the music (predominantly classical) I am interested in. I see (hear) no advantage of MQA over HiRes recordings (I don’t think I do) The additional cost of Qobuz Sublime (€300 p.a.) over TIDAL HiFi (€240 p.a.) is offset by savings on the reduced prices of download purchases. Qobuz offers digital booklets with…

Integration with roon radio is worth it for me.

I think you can sign up for the free trial and convert to annual. BUT, the current promotional pricing is supposed to expire in a couple of weeks.

Yep, I’d like to get this figured out now as to not miss the promotional pricing.

I’ve not yet received an answer from Qobuz, but poking around a bit on their website, I found this;

Can I get a free trial period to experience Qobuz streaming?

So it’s either try out Qobuz with little $$$ risk by signing up with a monthly plan (more expensive over time), or risk $150 ($30 less expensive for a year) on an annual plan.

I feel like someone just pissed in my cornflakes.

You can do the trial, and before it ends, change plans to the annual, when you actually make the payment.

This is my understanding as well.

I’m not sure you can do that. When I was on a monthly plan and switched to annual, I think the annual went into effect with the monthly ran out, but I don’t remember for sure.

James, it doesn’t work that way for new sign ups. I recently signed up for a monthly plan with Qobuz. After a week or so into the free 30 trial I decided I wanted to keep it, so I went for the $150 annual plan to grab it before the promotion ran out. As soon as I signed up for the annual plan they cancelled the free trial and charged me $150 and I was then on the annual plan.

I’m seriously leaning towards the monthly plan to start.

No more thinking…signed up for monthly plan.

And now the questions really start!

I added my first album to my collection. It shows in Album view and Artist view, but not in Genre view when looking at all albums under genre (Pop/Rock in this case). Is this normal? If so, if I play by genre, are Qobuz albums I’ve added not included in what’s played?

I don’t usually use Genre playback, but I opened some Genres to check for you and I’m seeing Qobuz albums that I’ve added to my library there. When running in Roon Radio mode, it will randomly play tracks both from your library and from Qobuz’s library, thus allowing you to discover new music/new artists.

I just went back to check, and now all the genre tags on the Quboz albums I’ve added so far have disappeared completely!!

What is going on??

Am I going to have to manually edit the genre tag for every Qobuz album I add? This doesn’t make sense.

EDIT: I see what’s going on. I had Roon set to just read file tags. When looking at a Qobuz album, all the genre tags show, but as soon as I add it to my collection, the genre tags disappeared. I have it now set to show genre tags from files and Roon, and now the albums appear as they should.