Subtitles for discs in boxsets?

Is there a way?

This is a long-standing feature request, check back over the forum

The simple answer is “not easily “

Classical is the worst case …

I have learned from experience not rip the complete box set then export the folder to your Roon folder!, it can end up being a complete mess. Rip the discs one at a time add to Roon in its specific folder then adjust the metadata as required, here is an example King Crimson/Audio Diary 2014-2017 disc 1 and so on. once done create a playlist then add each album from 1 to 5 etc.

You will notice one of the discs is 2014-2018 and when I originally ripped the box set complete then added to Roon, for some reason Roon got confused and would not add this particular disc to the set. Even trying to merge discs does not work all the time?. Thats not to say Roon as bad at box sets just sometimes it recognises the discs belonging to a set and other times just gets confused. Below is an example of where Roon did recognise the boxed sets although still had to merge the albums as it split them up for some reason.

The bottom line, make sure the metadata is as accurate as possible before adding to Roon also be prepared to spend time editing and adding your own album art etc to the metadata if needed. A little effort goes a long way.

FYI I have the Faust box set in vinyl but have not yet played them.

If you have CD1 - Disc Name etc ie a more complex folder name than simply CD1 , Roon assumes a separate album and splits them off accordingly

That’s a nice little trick. I’ll have to try that. I still look forward to the day when they build in a more “official” solution to this problem. I know it’s been on a lot of people’s wish lists for quite a while. I’m actually finding the majority of what I buy now is special editions and box sets so this is really an important one for me.

Here is another example of a box set, Steve Hillage, Searching for the spark, 22 Discs. As you can see instead of merging all discs as a box set, I have split up each individual album and added its relevant album art then as previously set up a playlist. Why do I do this, because sometimes I like to go straight to a certain disc in the set and this makes it easier. If I want to random play the set I use the playlist. 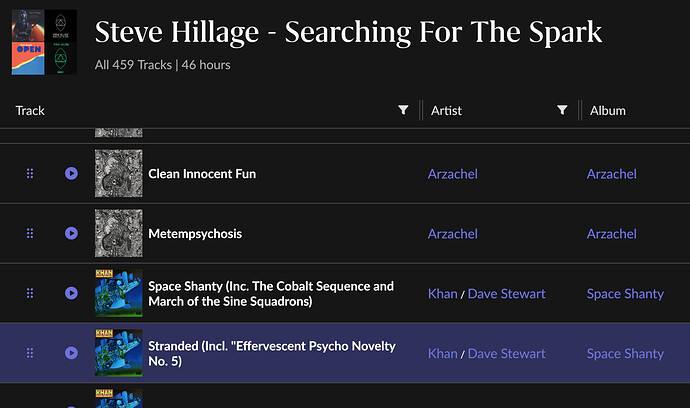 At the end of the day album art is there to help identify an album and it’s all part of the experience. Am I to fussy by half, maybe?.

It doesn’t seem unreasonable for Roon to consider this feature request. Big Box sets have been with us for a while, and this doesn’t seem that difficult a request.

Another simple way do do box sets is to load each Blum individually, then use a tag with the box title.

Again, these things are all within the scope of reality for Roon to implement. Not rocket science, just another field on the user side of database record.