Since I started using Roon a few weeks ago I’ve started using dbPoweramp. I just used my Sooloos C10 previously and was blissfully ignorant of the whole process. Well, no more. So! I’ve been doing some research on setting for ripping my CD’s.

I’ve done some very preliminary tests ripping. Initially “Burst” vs “secure ripping”. Now, it seems that both modes use Accurate Rip. “Burst” mode seems work very well, sounds fine (no critical listening yet though) and is fast. It also produces “Accurate Rip” and a CRC check. If “Burst” produces this what real advantage is “secure ripping” since from my reading they (all things being otherwise equal) produce bit perfect copies.

Secure ripping takes dramatically long, 10-15 minutes per CD! No sure this is really worth all that effort. Thoughts are appreciated.

Also, I read where using “ReplayGain” (not the apply version) is also recommended. If indeed it is recommended that I use this what settings? Particularly the LUFS setting. I’ve read anywhere between -18 to -23 (default setting). I’m also using the OS X versions and have download the latest version. When using ReplayGain I also get an ?error? informational? message that the level had to be adjusted. I’ve check track and album as well.

Below are the setting I’ve tentatively started using, but again, just trying to figure all of this out.

In Roon I normally use “sound leveling” because of the dramatic changes in loudness that occurs without it are just terrible. Sometime more than a 15 reduction or increase in volume is necessary between albums to keep the volume at a nominal level. I know this doesn’t mean “bit perfect”, but it is a less painful existence.

Thanks in advance for any advice. 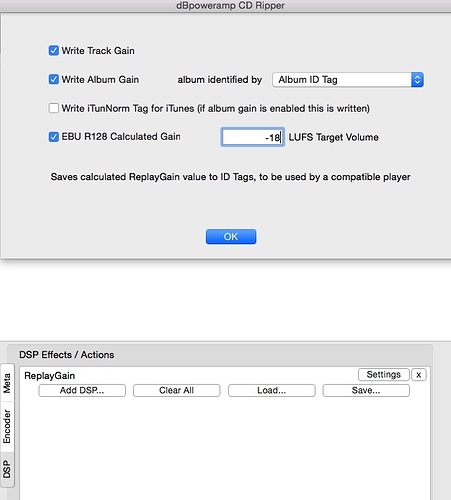 Firstly, read this; it’ll pretty much answer most of your dbPA questions:

In my opinion, you should stay out of Burst unless you have a ‘problem’ CD that you can only rip successfully in Burst. If the CD isn’t damaged, and is in the AR database, then the 1st (and presumably successful) pass in Secure mode won’t take much longer than Burst would. In the above scenario, both would yield identical results (sonically & mathematically). If the 1st Secure pass doesn’t yield a successful result, then the additional passes are designed to fix that and/or figure out why. Once you’ve had experience in dbPA, you’ll pick up on these behaviors and intuitively know when to switch to Burst mode.

Did you go through the setup of your offset for your ripping drive? 10-15 minutes per CD isn’t unheard of, but (even assuming all 6 passes in Secure mode) ~5 minutes is more common…

Yes, I did set up the offset. Thanks for the URL, I had already read it. This is all very new and much more complicated than initially anticipated.

Your answer is much appreciated, especially the part where I’ll get a hang of it all!

I’ve followed the CD ripper guide as you indicated. Ripping wasn’t being done properly because I had “C2” engaged. The process never completed properly with it engaged (I checked to see if the drive had supported this before hand, as I had read…didn’t work, oh well). Unchecking the C2 and ripping with Ultra Secure is very quick. Now < 5 min per CD. Much better!

I still don’t know about LUFS, but -18 work fine on the 2 CD’s I’ve ripped. So, unless I am advised otherwise I’ll just leave it there.

I am curious. Are they any difference between how dBpoweramp and Sooloos rip? Sooloos of course didn’t give any options, so I’m know of curious now that I’m learning ripping.

Dbpoweramp 16.2 was recently released for the Mac OS X. It has some significant bug fixes for Mac CD rippers who use Roon Software, so I thought I would resurrect this thread and put some helpful tidbits for users in a similar situation. Suggested settings for DBPA ripping on the Mac : Secure ripping method, enable AccurateRip, File Name Restricted Characters set to Defaults (Windows). This is important and counter intuitive, because Roon uses SMB file sharing by default, so CD tracks with question marks (very common) are substituted with characters that are compatible with SMB file sharing.

Point the Base Location to path of CD rips, then add this logic:

in Preferences, ID Tags, click “Force no date on Year” and (very important for multi-cd set identification) : Multi-CD Add Disc to Album to : (never) . The album name must be the same for all CD’s in a set, they belong {CD1, CD2, …} below the main directory name.

If you are using the Multi Encoder (as I do), add the dynamic naming logic to flac, and m4a AAC or other codecs. I use flac Lossless Level 8 for Roon playback in the house and m4a AAC files for my iPod, for my car.