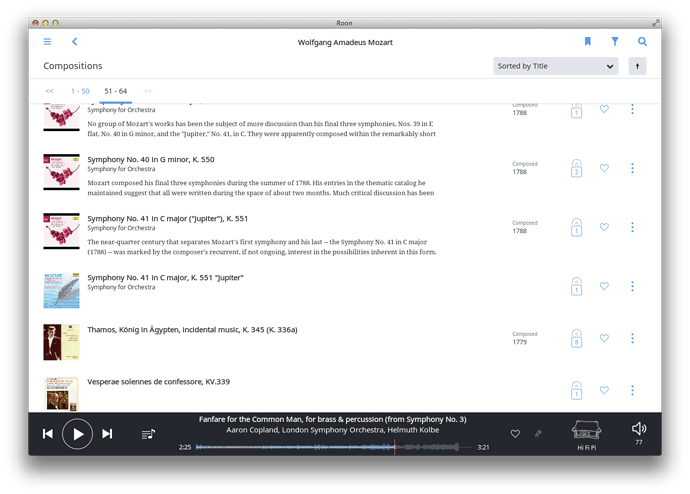 @Jan_Martin For the composition which is not recognised as K. 551, has the album that it resides on been identified by Roon?

Please would you post a snapshot of the album details for this album?

Hi @joel,
Yes, Roon seems to recognize the album OK, sort of. Here’s the album screen you want, I think. 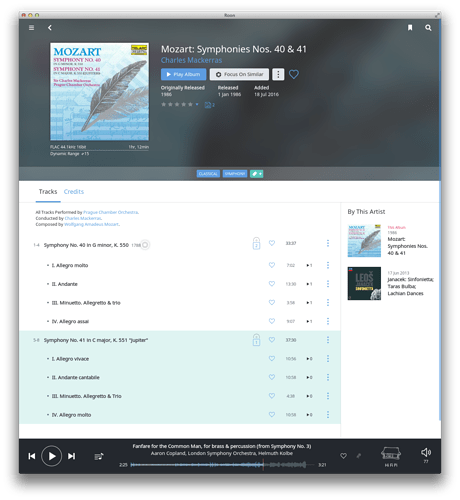 and here’s the one with Credits 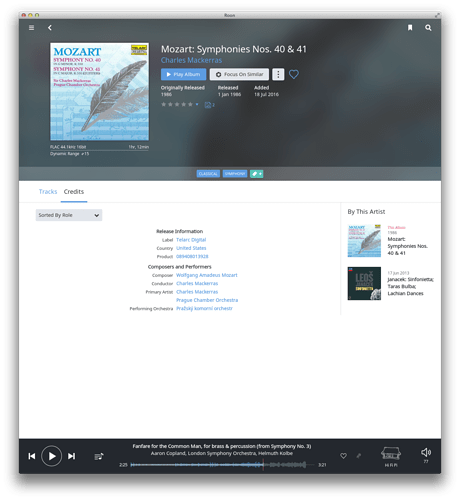 I hope this helps. Thanks for taking a look at this.
-Jan

Hi Jan. What’s happened here is that we have two different sets of metadata for this album and you’ve got the one with the inferior data. There are plenty of reasons why this might have happened, not least a better track timing match, or some other specifics like release date or label. We have plans to improve this situation, but it’s a major task.

What is actually happening is that the metadata used for your album has no multi-part work information. Roon tries to create it locally and it succeeds, but the composition isn’t linked to the other one. This is possibly a bug.

As a workaround, you should be able to manually re-identify the album and select the other metadata set. You want the metadata with the first track title:

Hi @joel, I would never have guessed that was the better metadata set. As you say, the track times are way wrong, wrong label, wrong data type, wrong date. Go figure. Well, thanks for pointing me at the right data set, though I think it is reasonable that I didn’t choose that one initially!

I would never have guessed that was the better metadata set

No, and that’s a problem that we need to solve.

Hi @joel
One more thing - since the problem is lack of multipart work information - AGAIN - that gives a little more support to my hope that you folks will come up with a method for doing that local generation of correct multipart data level, both automatically and by the user, and of course part of that will be to make sure that such data meshes with metadata for other versions of the same work, so they are recognized as the same.

Tricky stuff with big databases I imagine… Thanks for working on this.
-Jan

Couple of questions as I’m currently failing to reproduce your problem with your original set of Roon metadata:

Not to worry; if you’re not using “Prefer File” it’s not important. (It’s the value in your FLAC file tags.)

OK. The reason I went all for Roon doing the track and album titles is that I tagged all my music for my Squeezebox and used “album” as a composition delineator. So
“album” = “Mozart: Symphony #40 in G minor, K. 550”
was used as a standin for the non-existent Composition level of organization. I figured that would really screw thing up for an album-oriented system like Roon, so I let Roon do it all, just hoping it could mostly ID my music by itself. Seems to work pretty well, actually.

Someday I should write up a little post on why I think “album” is an almost entirely useless concept for classical music in a digital library. And I also dislike the use of “classical” to describe Western art or concert music, but that’s a pretty common observation. Something for later.

Sure, that makes sense. Presumably you’ve looked at the Composition browser (via the Menu)?