Tango in the Night not MQA

This classic album is supposed to be 24/96 MQA but is only playing at RBCD for me. 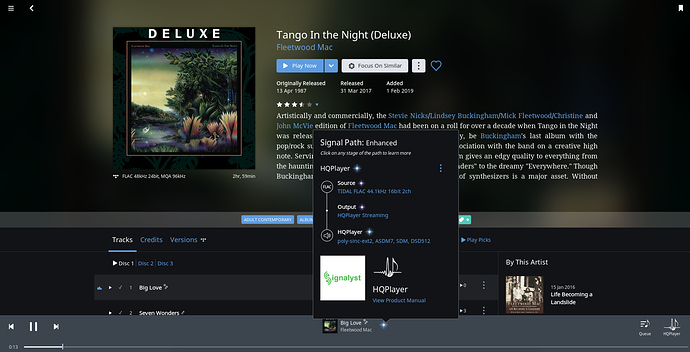 @dabassgoesboomboom Looks like only discs 2 and 3 contain MQA-encoded tracks.

I’m in the US and I can’t find this album ( deluxe version ) searching Tidal using Roon. I can find the the single disc MQA version and can confirm all 12 tracks plays as MQA encoded.

I’m guessing you guys live in other countries. Did this deluxe version just show up in your countries?

Hey Tim, I have a US Tidal account too.

Hey Tim, I have a US Tidal account too.

I tried searching again and could not get the deluxe version to show up but then I clicked on the Versions tab and found it. It’s in my library now.

And I also learned how to delete an album from my library since I did not see any point in keeping the single disc version in my library.