The Band, The last Waltz 40

The 40th Anniversary album is not properly recognized. In ROON just the “normal” album was identified.

The 40th Anniversary Deluxe Edition (4-CD/Blu-Ray set) of the original soundtrack has 54 tracks, including the entire concert, as well as rehearsals and outtakes. Among the rarities are performances not featured in the film, such as “Furry Sings The Blues” with Joni Mitchell and “All Our Past Times” with Eric Clapton, plus rehearsals for “Caravan” with Van Morrison, “Such A Night” with Dr. John, and “King Harvest (Has Surely Come)” a song that was not performed in concert.

This information was taken from Discogs: 40th-Anniversary

I assume you aren’t in a position to try it. Roon may reveal its underlying recognition logic to you, but it usually doesn’t. Why? Because we might become accustomed to a logic that might change and evolve over time.

But, Roon’s watching and will chime in as necessary.

My answer: it should/might. It’s a 1-minute experiment.

Is it possible in ROON the identify an album by:

I always add (whenever possible) to my files a “UPC” tag containing the barcode (string) and it does show in Roon
not sure, though, it is actually used to identify the album

Thanks for your replies.

There is a Product as well as a Catalogue Number available (shown under the details). And here is the root cause: the 40th Anniversary album is not properly recognized by any of these numbers. In ROON just the “normal” album was identified. 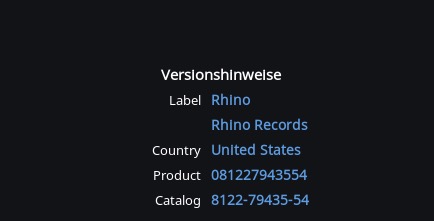 The “normal” version had a different barcode and the 40th Anniversary Deluxe Edition was not even showing up under “Identifying Album”.

Now that I have manually added Product and Catalogue Number I am afraid that I am disconnected from further metadata enhancements that ROON will add moving forward?