The case for data normalization

I think the pics make it self explanatory 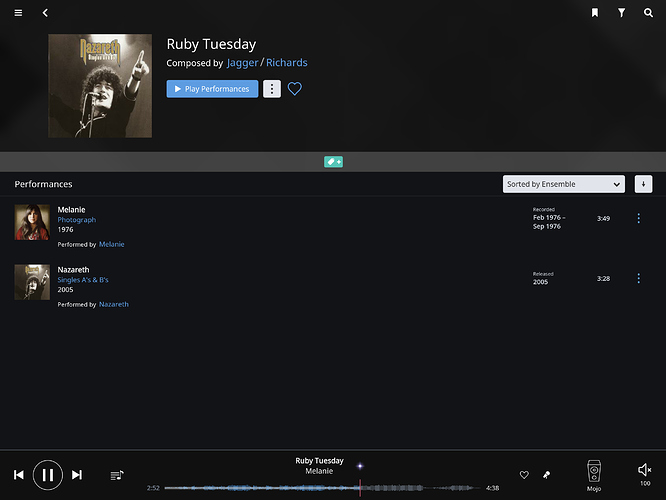 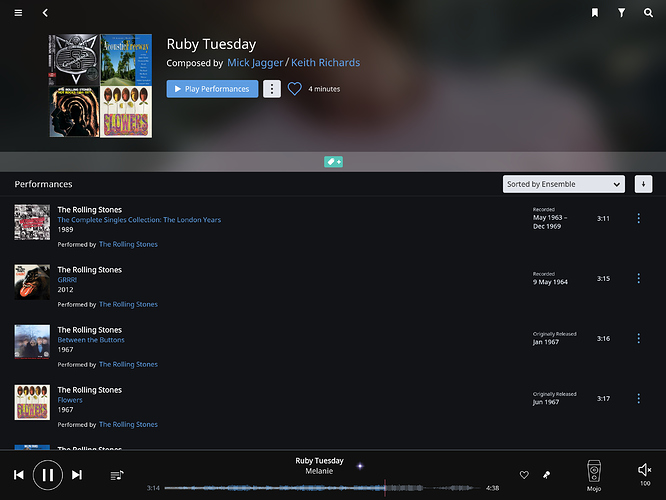 Hi Evan. Are the Jagger / Richards composer credits on the Nazareth album coming from your files or Roon? I can’t find metadata in our service which just has “Jagger” and “Richards” for Ruby Tuesday on that album.

@Joel, looking at the Nazareth album it was unidentified (now identified) whilst the Melanie album is identified. Underlying composer tags in both albums have entries composer = Jagger, composer = Richards. Import settings for composer credits is set to Prefer Roon. So no idea why the Melanie version of the track is showing under Jagger / Richards?

Because if we have no composer information for the particular edition that your album is identified with, we’ll take it from your file tags if it’s there…

Ok, makes sense. Should we report cases of Roon missing metadata or is this something that’ll ultimately be crowd sourced in the background?

There is simply too much missing meta; this will have to be crowd sourced. (Just please change your composers to Mick Jagger and Keith Richards ;)).

Will do. @joel, I guess there’s a case for Roon to compare metadata across various releases of the same album to fill in the blanks - I’ve noticed Rovi is very inconsistent with releases that aren’t the “main” release, even if the metadata exists in the main release. Come to think of it, it’s something they should be doing at source rather than Roon having to do retrofitting…albeit it would nonetheless enhance metadata quality.