I love the integration of Tidal with my own music collection and have found some great new music via forums, Radio Paradise, this community and Roon’s discovery, all of which I’ve added to my library and playlists that I’ve created. Tidal is certainly a great resource.

There is one fundamental problem with Tidal though.

Having lived through the 80’s, 90’s, 00’s and collected CDs as they were released I’ve come to own and love some great sounding albums. I haven’t got round to ripping them all yet, but I’m getting there.

The other day I remembered the track by Michael Jackson - Black Or White, and thought I’d put it on.

I remember, back in the early 90’s playing the second half of that CD (Dangerous) over and over in my University Digs on my old Marantz CD Player, Mission 760 Speakers and Kenwood KA 3020 amp. It sounded pretty special as I recalled. (Never liked the first half of that album, but… hey ho)

As I hadn’t got round to ripping it from my collection, I just added the Tidal version to my library and sat back and played it from Track 8 as I always used to.

What I was presented with was unfortunately lacking somewhat and left me cold. I skipped through the tracks to the end and thought… oh well… my system is much more revealing now, it’s showing that what I thought was a well recorded CD in the 90’s falls short today.

However… I then thought… I’ve fallen into this trap before… The version on Tidal, is most likely a newer - ‘remastered’ version.

I immediately grabbed my dusty 1991 CD off the shelf and ripped it. Stuck it on… what a difference!! Dynamic, more realistic, more engaging… just better! How I remembered it!

As I say… I’ve had this happen before… I once downloaded a SACD version of Thriller and was unimpressed. This was an album I’d originally enjoyed on Cassette, then CD when it came out, however, unfortunately it was stolen from one of the houses I was staying in at University and I didn’t replace it until 2001, but I replaced it with the ‘Special Edition’ CD that had just come out.
I played it a bit, but wasn’t impressed or ‘engaged’ with that either. The SACD version was slightly better, but still not how i remembered it.

It was when I read about the ‘Loudness War’ that I began to realise what the problem was.

I recently ordered the original Epic version of Thriller 2nd-hand off Ebay. Ripped it… Loads better!!

Another example is Paul Simon’s Graceland, the original sounds loads better than the Tidal version.

So… I guess my point is… Tidal is a great resource, but it’s truly a shame that for some of the great sounding albums of the 80’s, 90’s etc. the version on Tidal falls far short of the sound quality of the original recording due to Dynamic Range Compression.

Eventually, many years from now, those dynamic, well recorded masters will be lost for ever!

Has anyone got any other examples of fine sounding albums that sound far better on original master than on Tidal?

It’s not Tidal pre se, “hot” remixes have been a problem for years. But I get your point.

Yeah, I know, but it’s those “hot” remasters that are on Tidal. Would be lovely if they had earlier versions on there, but that ain’t gonna happen.

I wouldn’t think so. Too much emphasis, even on here, on high Res, DSD etc. Not most “authentic”

Well… certainly to my ears… it’s far better to get the best mastering of an album at 16/44 than it is to get a bad mastering at ‘Hi-Res’.

This is mainly true of pop and rock recordings up to the turn of the century in my experience.
After that, the originals are already brick-walled.

However… more recently… some dynamics are starting to return. I have high-hopes that the tide is turning! Mainly due to Replay-Gain being used in mixed playlists making the less dynamic tunes sound dull and flat in comparison.

Unless you really know early CD pressings and masterings, you probably have not acquired the original Epic version of “Thriller.” That requires a generally costly Japanese pressing, which is mastered with pre-emphasis. If you rip said CD, you need to know how to apply a digital de-emphasis filter.

The other issue is that the original Epic catalog number has gone through two secret remasters for a total of three masterings between 1982 and 1989. 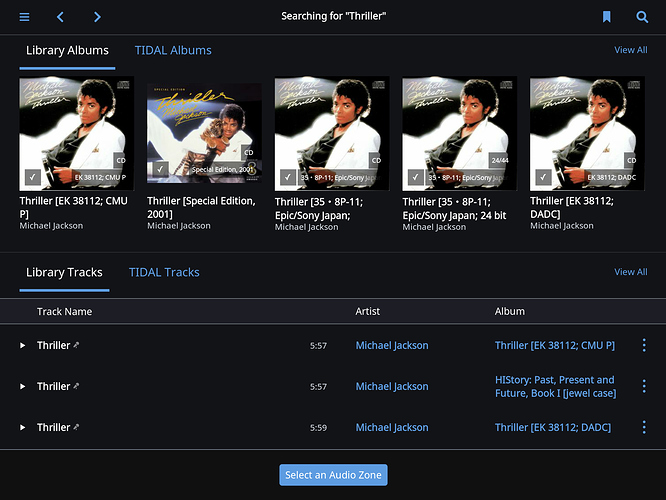 I think my earliest version is vinyl.

The Japanese 35 8P-11 disc of “Thriller” (Mastering #1) with pre-emphasis does not sound as good as the EK 38112/DIDP 20022 disc (Mastering #2) with no pre-emphasis when both are played on a CD player that supports pre-emphasis. Or, when played from ripped files even if the pre-emphasis is properly filtered.

This is a good post to read about these masterings:

Was the standard much better than vinyl in terms of specs? NO, Laserdisc analog audio is FM-based. It is not analogous to vinyl in any respect. LD...

Most of my time in the last year or two has been spent rebuilding and expanding my CD collection that was mostly lost to a moving incident many years ago. I had a long list of CDs that I wanted to get and many CDs I had that I would not replace because they did not stand the test of time. I had Roon with Tidal so I could listen to most of those old but not so interesting albums pretty much any time I wanted without having to buy them again.

I am of the opinion that popular music pretty much died in the mid 1980’s. It certainly died for me then. There is very little pop music from the 90’s on that I really like anymore. So most of my library is from the 60’s and 70’s with some 80’s. This means that most of the albums I wanted to buy on CD had uncompressed masterings available.

Along with the list of albums I wanted to replace, I used Roon and Tidal to explore music that I either had not heard or did not appreciate in my youth. Any time I found an album I want to have in my collection, I buy it. Why? For a couple of reasons. First, half of the time, Tidal has a newer mastering that is compressed. I also like having physical CDs so I am not tied to the Internet.

I have been buying CDs like crazy using the Steve Hoffman forum to ferret out the best masterings.

I agree, this is the problem with the streaming services and why I could never rely on them alone. They are a discovery tool and a mobile solution only for me.

I’ve spent allot of time curating my collection with the best masters.

Hi @Speed_Racer. The pressing I have is CDEPC 85930. An early Austrian pressing I believe. I’ll look it up when I’ve got a minute, but it sounds good to me. Thanks for the info.

In an era of Hi-Rez streaming the great sounding CD masters are still growing in demand (especially rare ones like DCC Gold CDs).

Too much emphasis is put on getting a title on “vinyl” or in “Hi-Rez” vs. getting a great mastering from the best source.

There are some Tidal versions which sound better though, as I’ve just discovered.

Roon Radio picked a track from Genesis (the album with the kiddies shapes on the front cover) yesterday and I thought, that sounds better than I remember. It’s another old album I haven’t ripped yet. I’ve just ripped it and the Tidal version sounds better so I made it my ‘primary version’. Another reminder about how great Roon is… I can compare and select my favourite master so easily!

Then I ripped Invisible Touch, and my original version sounds better than the remastered Tidal version, so the original is what I’m keeping in my library!