But these songs are not ONE album per se, are they? Why not divide the separate albums into sub folders? (Disc1, Disc2 etc)
It seems to me that this is more of a problem with hdtracks.com and the delivery of the product.

Ahhh, now it is really clear that you haven’t bought any of those albums and are just making up your own hacks. Otherwise you would know that Roon often chokes if you try to split up the albums…for instance, I have the ZZ Top box from HDTracks. I split it into albums. Roon doesn’t see it like that…it somehow detects that these tracks aren’t the albums per se but the big download album and shows me the album title “ZZ Top Collection” (or whatever it is) for each of the ZZ Top albums, and gives me the same artwork for each of the albums…so, no, you really can’t hack this without making Roon choke somehow…either it gives you crappy metadata (which happens to fit the product offered by the label; this isn’t HDTracks’ problem) or you leave it alone and then Roon can’t display all the tracks.

Hence: Roon should be compiling and publishing a list of known problems reported by multiple users, so the customers realize they aren’t going crazy, but Roon hasn’t gotten around to fixing them.

I buy tons of compilation box sets from HDTracks, Van Halen, America, Yes, ZZTop, The Cars, the Doors, David Bowie 69-73, David Bowie, 74-76, and many others. I ALWAYS split them up into their original albums and Roon finds them and displays them as such; which I then tag with an album version titled the name of the box set.

The first is a shot of the how I split the files up on the watched drive: 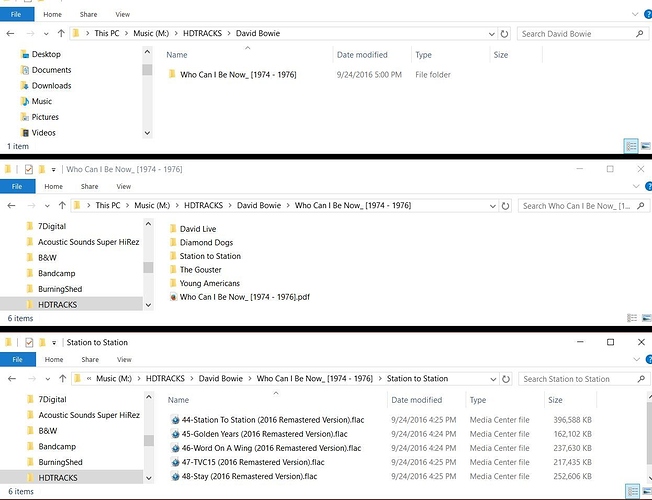 Then just to show you I did not change the meta data, here is the meta data in MP3Tag for station to station:

And finally, Roon showing the albums in their correct separation with my Album Version tagging

If you are having issues then feel free to PM about specific box sets and I will see if I can make suggestions so you have the same results.

Most boxes, that’s what I do…and Roon is getting smarter. It now leaves my split of the ZZ Top box alone and doesn’t usually mess it up any more. But not always. Same with the two Linda Ronstadt 70s and 80s collections and more recently with the Bowie “Who Can I Be Now” set…I think it is ridiculous that the labels put these out as one long album, rather than taking the time to split them and tag them properly. But, whatever, Roon is supposed to index official releases, and make distinctions between different versions of the same album, and I am confident that over time Roon will take these stupid label choices into account

Anyway, with the Stones mono box, it is just too confusing what with the various US and UK releases to figure out just how to split it up, then find the right album art, or make sure Roon gives me the right art, and…too much work! Besides, why should I have to split up that album just to get Roon to display all of its tracks?

so, I"m glad to hear Roon is fixing this in an upcoming release, but…really, a list of Known Issues is kind of a common and reasonable thing for a software company to do, especially one that invites as much customer input as this one does.

Known issues is, surely, why we have forums and online support. I would agree that there should be a specific area where known & current, unresolved, issues can be found but IMHO the user manual is not the place.

In the meantime, and back on topic, there appears to be a formatting error (on my iPad Air 2) at page:-

In the meantime, and back on topic, there appears to be a formatting error (on my iPad Air 2) at page:-

Paul, what’s the issue - that page seems OK to me when viewed in the Edge browser on Windows? Thanks.

The table/box titled “System Output” appears to be concealing/overwriting some text:-

“You can always return the settings to their default state by clicking Restore Defaults. Nothing is saved until you click Save Settings so feel free to exit the dialog if you get things into a confusing state and want to undo your changes.”

Then the table appears, and the next text reads:-

I can reproduce & screenshot if required.

Ah, I see what you mean. However, that’s just an artefact of the snip of the original screen, which wasn’t clipped tightly to the Settings window border. There’s no text on the user guide page that has been overlaid by the graphic. That text was on the original display from which the graphic was snipped…

Paul, thanks for pointing out the graphic issue. I’ve cleaned it up so that it’s not confusing any longer. Cheers.

Please make a PDF version available. I’d like to read the whole thing, or much of it, but not one page at a time.

Please make a PDF version available. I’d like to read the whole thing, or much of it, but not one page at a time.

I know what you mean. I’d like a PDF version too. I believe this is in the plan, but further than that I am not in a position to say (I don’t work for Roon, and can’t speak for them).

Sorry, I buy tons of compilation box sets from HDTracks, Van Halen, America, Yes, ZZTop, The Cars, the Doors, David Bowie 69-73, David Bowie, 74-76, and many others. I ALWAYS split them up into their original albums and Roon finds them and displays them as such; which I then tag with an album version titled the name of the box set.

I need to bookmark this for reference and review it more closely. I’ve had issues so far managing exactly this kind of boxed set, where I would prefer the albums be recognized as such.

I really miss navigation hyperlinks that will allow for us to easily read through the manual online. Some previous and next page links and perhaps one back to the ToC.

The look of the David Bowie Boxset is perfect as displayed in Roon above . Unfortunately , I’m losing my grip on reality or , at least , my tagging skills , as my Bowie set , ended up looking like this : 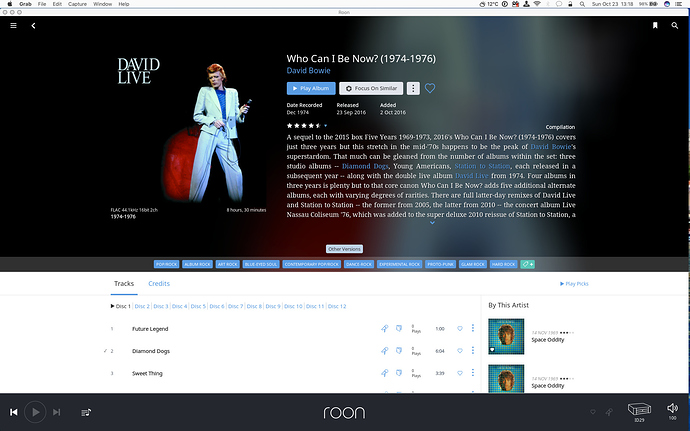 All albums have the boxset title , and each individual disc somehow adopted the David Live ! artwork despite having the correct artwork being in each folder ! Think I really need a pdf to get back to basics with tagging as there too many inconsistencies in my collection . Looking forward to 1.3. Still mulling over starting my library again from scratch eventually .

The user guide is very helpful, however I wish to print it out and am unable to do that. When I right click in Windows and hit print I only get one page even though I have checked print all. What am I missing, if anything?

Why do I want to print it. Well I’m not very technical and would like to have the manual available in hard copy to read from when I am setting up roon on my laptop server in the other room. Yes I realize there are other options but being a bit old fashioned this is the option I prefer. Thanks for the great software and support.

I freakin LOVE having this owner’s manual.

New Roon user here (signed up for the lifetime membership!) and I found the user guide extremely helpful to get setup properly. Right amount of info balancing detail but still concise. Cheers!

A post was split to a new topic: Roon Server on Synology DS216j?

9.7" iPad Pro… not JUST a tablet… Please don’t lump me in with Android users…