@support
Hello, I just ran across an issue when I try to play the MASTER (aka MQA) version of The White Stripes Icky Thump Album, Roon defaults back to the HD version of it. Please see my screenshots where I’m playing it from under TIDAL -> Masters yet it’s playing at 44/16bit. Where when I play it with Tidal it’s playing at 88/24bit. I was expecting Roon to unfold it to at least 44/24 if not 48/24.

So far this is the only album I’ve noticed doing this so I figured I would report it in case it’s not a known problem. 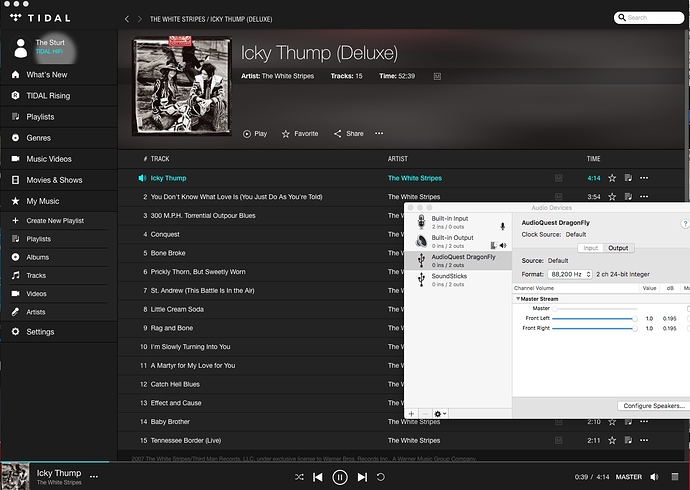 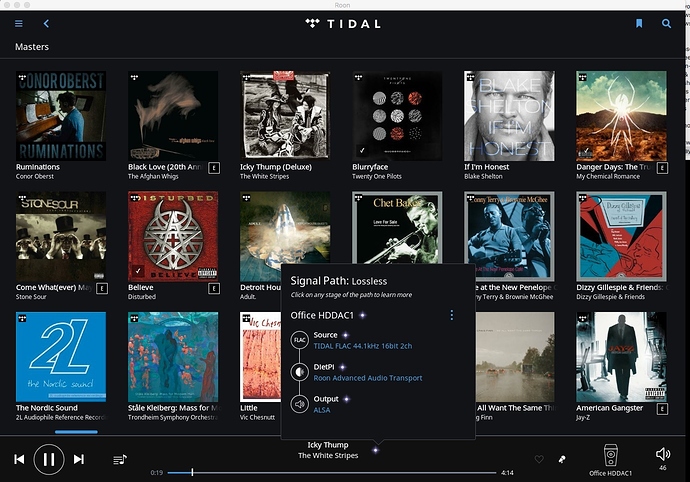 Or, an alternative explanation, you are playing the HiFi album, not the MQA album.

Thanks for the quick response and the correction of my MQA terminology.

I’ve confirmed I am picking / playing the MQA version of the album. I am getting at it from the Tidal masters menu within Roon. I was under the impression that all MQA files would play 44.1/24bit at a minimum.

My thought was that for some reason that even though I’m picking the MQA version, Roon is actually playing the HD version of the album from Tidal since it’s coming across at 44.1/16bit. If that’s not the case, no worries. Just wanted to report it in case it wasn’t playing the correct Tidal album/track.

MQA decoding is not supported in Roon yet, but I think they are working on it.

So I believe Roon is doing it correctly - it passes the 16/44.1 bit-perfect stream to your DAC for MQA decoding if your DAC supports it. Current version of Roon does not decode / unfold MQA.

Isn’t there supposed to be 2 unfolds, the first in software and the second in the DAC? Or is the DAC supposed to do both unfolds?

(1) There are products that do the first unfold only (e.g. Tidal Desktop app, Audirvana Plus 3).

(2) There are MQA Full Decoder hardware products that will perform all decode / unfold / render.

(3) There will also be MQA Renderer hardware products that can only do the final MQA renderering (but unable to do the first unfold / decode to MQA Core), to be used in conjunction with the (usually software) products as denoted in (1). MQA For Civilians At CES 2017 Tidal announced it was streaming MQA masters and MQA Ltd announced software decoding of the MQA signal. Two big items for all of us who enjoy music. Immediately the questions and conjecture started flowing. It's human...

Cheers for clearing that up, I wonder if/when my DAC, DragonFly Red, will support it. I read that some firmware update for MQA was in the progress, but so far nothing.

You should check with the manufacturer of your device for the latest status. I googled a bit and found this:

No you only get the DFR and a leather case

Thanks, I am registered so I’ll just wait for the email then.

Awesome, Thanks for confirming that the MQA encoded file is indeed 44.1/16 and Roon is playing it correctly.

@support - You can consider this resolved