For Tidal albums already included in the local ROON library it would be nice to have a ROON function, which automatically replaces a respective non MQA version by the MQA version as far as already available. 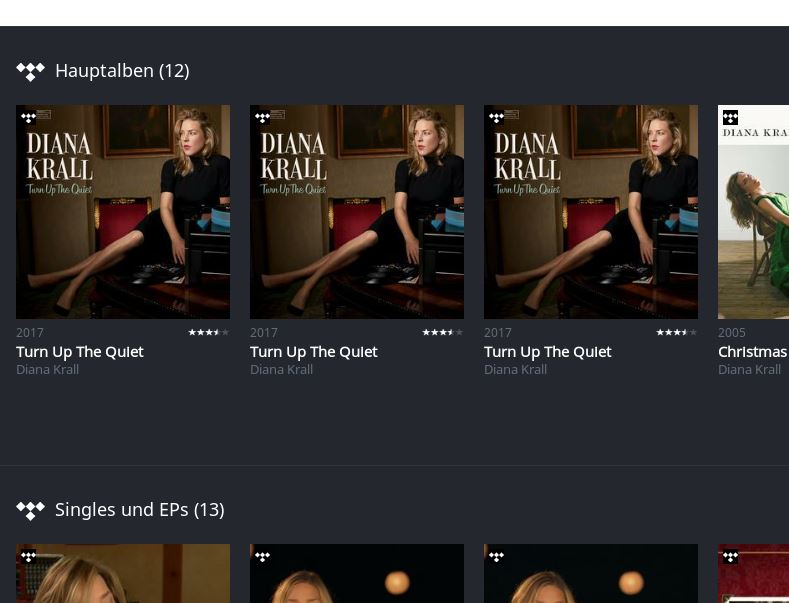 Did this example just overlook the copy that hasn’t been messed up with MQA? That’s the one that I want to quickly identify and play.

I find it better to overlook Ms. Krall altogether.

Forgive me if this has been stated before, but, I found a little trick that works sometimes. Not for Ms. Krall. If an artist has an album that is rated E and M in the Tidal app. In Roon, the E will translate but the M will not. So if you see two versions and one has an E and the other nothing, the nothing will most likely be MQA. See Joni mitchell below:

The “For the Roses” which has the red circled E is normal CD quality the next one with no letter IS MQA. Same for “Miles of Aisles”, the one you see in the screen cut is normal CD, the following version with no letter on the next row (not shown) is MQA. Now, I realize it doesn’t help if the CD version is not E, but, in the case it is, it seems to be a good indicator.

I too would like this, it’s well overdue … however in meantime as a workaround… I manually tag MQA encoded Tidal albums as MQA48, MQA96, MQA192, … after I have added them to my Roon library and also update the version field.

How and where do you do this?

And naturally, MQA unfolding support for DACs like the Dragonfly Red.

Can tags for Tidal titles be optionally made “public” and shared among Roon users? It’s just another way to search the Tidal catalog… crowd sourcing the “tags”.

You can already get all this with downloaded MQA files that are in your local library. Sadly not yet with Tidal MQA files which is of course the main source of MQA material for most of us.

It would be awesome to search / get a visual for albums on TIDAL that are part of their Masters catalog.

Right now, I check on the mega XLS that lists all of the Masters Albums or on the TIDAL app to look to see if the album is part of TIDAL masters.

In Tidal you can recognize a Master (MQA) album by the character M in the small square. Unfortunately this isn’t visible in Roon. Could this be added?

Working with TIDAL’s new MQA/Master recordings is a pain. Please work with TIDAL to be able to automatically import the highest sound quality version (such as MQA/Master) of an album into ROON. Also, it would be great to just see an easily recognizable tag of some kind on the album cove page.

It’s really ridiculous that the TIDAL Desktop app has no indicator itself except to be listed under “Masters” in album splash screen. There’s many MQA titles not even listed there.

I know, it seems so strange that with all of this great technology and tagging ability that the best that can be done today is make a “Masters” tab when you are in the Tidal section of ROON.